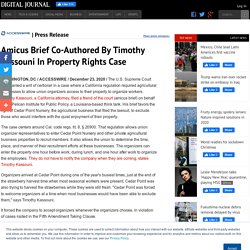 Supreme Court has granted a writ of certiorari in a case where a California regulation required agricultural businesses to allow union organizers access to their property to organize workers. Timothy Kassouni, a California attorney, filed a friend of the court (amicus brief) on behalf of the Pelican Institute for Public Policy, a Louisiana-based think tank. His brief favors the right of Cedar Point Nursery, the agricultural business that filed the lawsuit, to exclude those who would interfere with the quiet enjoyment of their property. The case centers around Cal. code regs. tit. 8, § 20900. That regulation allows union organizer representatives to enter Cedar Point Nursery and other private agricultural business properties to recruit members.

Organizers arrived at Cedar Point during one of the year's busiest times, just at the end of the strawberry harvest time when most seasonal workers were present. Palo Alto Council's Final OK Came After Multi Year Process, Timothy Kassouni Says. Timothy Kassouni reflects on length of Architectural Review Board case LOS ANGELES, CALIFORNIA, UNITED STATES, November 30, 2020 /EINPresswire.com/ -- When developers Jaime and Elizabeth Wong proposed creating a mixed-use building on 425 University Ave. in downtown Palo Alto in 2014, they faced an onslaught of opposition from residents. 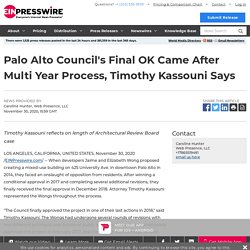 After winning a conditional approval in 2017 and completing several additional revisions, they finally received the final approval in December 2018. Attorney Timothy Kassouni represented the Wongs throughout the process. "The Council finally approved the project in one of their last actions in 2018," said Timothy Kassouni. The Wongs had undergone several rounds of revisions with four different architects and dozens of public hearings. When the council conditionally approved one of the Wong's options in 2017, they specified that the Wongs do three things to gain final approval. Caroline Hunter Web Presence, LLC +17865519491email us here You just read: Freedom of Speech Civil Rights Suit: A Win For All U.S. Citizens. Los Angeles, CA - ( NewMediaWire ) - November 19, 2020 - A recent settlement in the Federal District Court provides all U.S. citizens greater protections for Freedom of Speech. 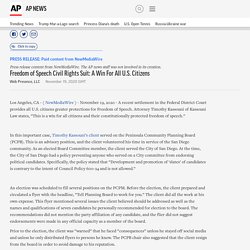 Attorney Timothy Kassouni of Kassouni Law states, “This is a win for all citizens and their constitutionally protected freedom of speech.” In this important case, Timothy Kassouni’s client served on the Peninsula Community Planning Board (PCPB). This is an advisory position, and the client volunteered his time in service of the San Diego community. As an elected Board Committee member, the client served the City of San Diego. At the time, the City of San Diego had a policy preventing anyone who served on a City committee from endorsing political candidates. An election was scheduled to fill several positions on the PCPM. Prior to the election, the client was “warned” that he faced “consequences” unless he stayed off social media and unless he only distributed flyers to persons he knew. Palo Alto: Council approves controversial 429 University Ave. project. California appellate court vindicates Proposition 13’s eminent domain protection.

Enacted by voters as a ballot initiative in 1978, California’s Proposition 13 gives property owners relief on their tax bills by limiting property taxes to one percent of a property’s value, with a maximum two percent increase for inflation per year. 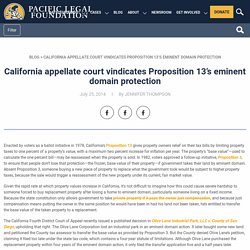 The property’s “base value”—used to calculate the one percent bill—may be reassessed when the property is sold. In 1982, voters approved a follow-up initiative, Proposition 3, to ensure that people don’t lose that protection—the frozen, base value of their property—if government takes their land by eminent domain. Absent Proposition 3, someone buying a new piece of property to replace what the government took would be subject to higher property taxes, because the sale would trigger a reassessment of the new property under its current, fair market value. The California Fourth District Court of Appeal recently issued a published decision in Olive Lane Industrial Park, LLC v. Legal threats, late revisions pay off for developer. Faced with a threat of a lawsuit, the Palo Alto City Council approved in one of its final actions of the year a highly contentious downtown development project that just two months ago was rejected by the city's own planning staff and panned by its Architectural Review Board. 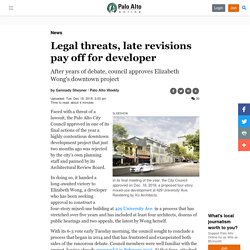 In doing so, it handed a long-awaited victory to Elizabeth Wong, a developer who has been seeking approval to construct a four-story mixed-use building at 429 University Ave. in a process that has stretched over five years and has included at least four architects, dozens of public hearings and two appeals, the latest by Wong herself. With its 6-3 vote early Tuesday morning, the council sought to conclude a process that began in 2014 and that has frustrated and exasperated both sides of the rancorous debate. Council members were well familiar with the project, having already approved it in February 2017.

But after a frustrating February, things began to look up for Wong in recent weeks. "The timing is now. Alameda County pays almost $2 million to Castro Valley company after losing lawsuit.