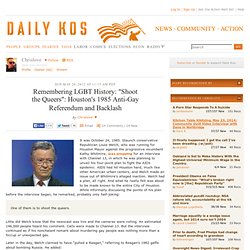 Staunch conservative Republican Louie Welch, who was running for Houston Mayor against the progressive incumbent Kathy Whitmire, was prepping for an interview with Channel 13, in which he was planning to unveil his four-point plan to fight the AIDS epidemic. Lesbian, gay, bisexual and transgender rights around the world. Play PokemonNXT 0.1. Kansas anti-gay segregation bill is an abomination. On Tuesday, the Kansas House of Representatives overwhelmingly approved a measure designed to bring anti-gay segregation—under the guise of “religious liberty”—to the already deep-red state. 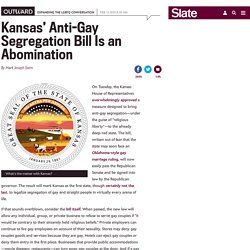 The bill, written out of fear that the state may soon face an Oklahoma-style gay marriage ruling, will now easily pass the Republican Senate and be signed into law by the Republican governor. The result will mark Kansas as the first state, though certainly not the last, to legalize segregation of gay and straight people in virtually every arena of life. If that sounds overblown, consider the bill itself.

When passed, the new law will allow any individual, group, or private business to refuse to serve gay couples if “it would be contrary to their sincerely held religious beliefs.” Private employers can continue to fire gay employees on account of their sexuality. 46 Most Iconic LGBT Moments of 2013. MtF 3 year Timeline. Africa's First Traditional Gay Wedding? Tshepo Cameron Modisane And Thoba Calvin Sithole Tie The Knot. Steven Simpson, Gay British Teen, Dies After Being Set On Fire At Birthday Party.

A young British man has been convicted of manslaughter after killing a gay teen by setting him on fire. 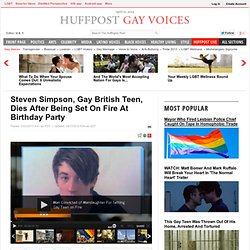 The BBC reports that 20-year-old Jordan Sheard has been sentenced to three and a half years in jail for the death of Steven Simpson after pleading guilty to manslaughter charges. Simpson, 18, died one day after sustaining "significant burns" in June 2012, according to the report. Simpson had Asperger's syndrome, a speech impairment and epilepsy, the Yorkshire Post noted. Secret Court of 1920. The Secret Court of 1920 was an ad hoc disciplinary tribunal of five administrators at Harvard University formed to investigate charges of homosexual activity among the student population. 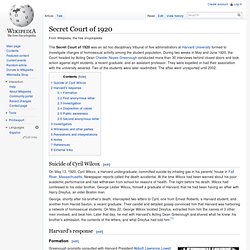 During two weeks in May and June 1920, the Court headed by Acting Dean Chester Noyes Greenough conducted more than 30 interviews behind closed doors and took action against eight students, a recent graduate, and an assistant professor.

Bryan Fischer Calls For 'Underground Railroad' Kidnapping To Save Gay Parents' Children. A prominent anti-gay pundit has sparked the ire of many in the blogosphere after calling for an "Underground Railroad to deliver innocent children from same-sex households. 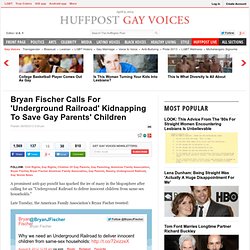 " Late Tuesday, the American Family Association's Bryan Fischer tweeted: That tweet also linked to an essay written by Robert Oscar Lopez, who claims that "children of same-sex couples have a tough road ahead of them -- I know, because I have been there. " Congress Passes Restrictions On Military Funeral Protests, Delivers Blow To Westboro Baptist Church. Westboro Baptist Church protesters will soon be severely limited in their ability to disrupt military funerals, after Congress passed a sweeping veterans bill this week that includes restrictions on such demonstrations. 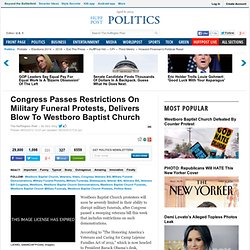 According to "The Honoring America’s Veterans and Caring for Camp Lejeune Families Act of 2012," which is now headed to President Barack Obama's desk, demonstrators will no longer be allowed to picket military funerals two hours before or after a service. The bill also requires protestors to be at least 300 feet away from grieving family members. France Passes Law Against Transgender Discrimination And Harassment. The French senate voted unanimously last week to prohibit discrimination against transgender people. Unfortunately, the language used to identify the protections was “sexual identity,” which is a less accurate term than “gender identity” as used in other legislation throughout Europe. Still, a number of impassioned speeches preceded the important vote, including from Sen. Michelle Miller (Socialist Party):

Federal Anti-Gay Hate Crimes Law Gets First Test In Kentucky. HARLAN COUNTY, Ky. -- In the middle of an April night last year, a young gay man named Kevin Pennington crawled out of the woods in the remote hills of southeastern Kentucky, looking for help. 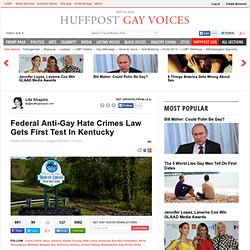 Bruises and cuts covered his face and body and he limped down the road, dragging his ankle along the asphalt, until he reached a pair of empty cabins in a clearing -- a ranger's station -- and smashed out a window in one and climbed inside. Pennington then called 911, setting in motion a series of events that will culminate next month in a historic trial: For the first time, the federal government will prosecute someone for a hate crime aimed at a gay person. In 2009, President Barack Obama signed new legislation that gave the federal government an unprecedented ability to crack down on crimes motivated by anti-gay prejudice.

Months later, the federal government began an investigation that led to the hate crime charges against the Jenkins clan. They didn't let him. First Gay Buddhist Wedding In Taiwan. Shabnam Mausi. Early life[edit] Shabnam Mausi is born in a Brahmin family. 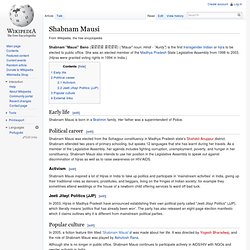 Her father was a superintendent of Police. Political career[edit] Fa'afafine. Fa'afafine are a third-gendered people of Samoa and the Samoan dispora. 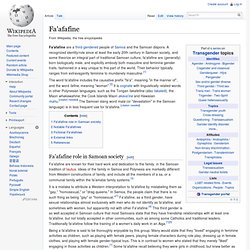 A recognized identity/role since at least the early 20th century in Samoan society, and some theorize an integral part of traditional Samoan culture, fa'afafine are (generally) born biologically male, and explicitly embody both masculine and feminine gender traits, fashioned in a way unique to this part of the world. Their behavior typically ranges from extravagantly feminine to mundanely masculine.[1] Fa'afafine role in Samoan society[edit] WikiQueer. Is some homophobia self-phobia? Homophobia is more pronounced in individuals with an unacknowledged attraction to the same sex and who grew up with authoritarian parents who forbade such desires, a series of psychology studies demonstrates. 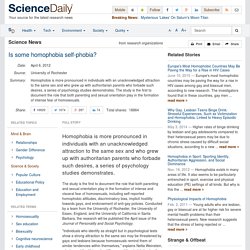 The study is the first to document the role that both parenting and sexual orientation play in the formation of intense and visceral fear of homosexuals, including self-reported homophobic attitudes, discriminatory bias, implicit hostility towards gays, and endorsement of anti-gay policies. Conducted by a team from the University of Rochester, the University of Essex, England, and the University of California in Santa Barbara, the research will be published the April issue of the Journal of Personality and Social Psychology. "In many cases these are people who are at war with themselves and they are turning this internal conflict outward," adds co-author Richard Ryan, professor of psychology at the University of Rochester who helped direct the research. Video - Breaking News Videos from CNN.com.

Gay rights in the US, state by state. Why Conservatives' Favorite New Study on Gay Parenting Won't Matter. Opponents of same-sex marriage are positively giddy about a new study purporting to show that the children of opposite-sex couples are better off than those of same-sex couples. "Scientifically this is huge," the National Organization for Marriage's Maggie Gallagher wrote on the website of the conservative magazine National Review. With the Supreme Court poised to consider one or more cases on gay marriage, NOM and other gay-marriage foes are hoping that the new study serves as definitive proof that will convince the high court that the government has concrete, nonreligious reasons to prevent gay people from getting married.

Webinar: How the Affordable Care Act helps LGBT people « National Gay and Lesbian Task Force Blog. Want to know what the new health care law — the Affordable Care Act — is doing for you and your family? The Task Force co-hosted a Webinar in March that may answer many of your questions. Many of us have experienced hostility or ignorance from health care providers, simply because of bias about who we are. The Affordable Care Act (ACA) guarantees that LGBT people can buy health insurance plans that don’t discriminate on the basis of sexual orientation or gender identity. Data from the Task Force’s study Injustice at Every Turn: A Report of the National Transgender Discrimination Survey, which was done in collaboration with the National Center for Transgender Equality, shows that 1 in 5 people surveyed have been refused medical care because they were transgender or gender non-conforming.