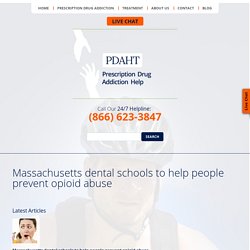 According to the 2015 National Survey on Drug Use and Health (NSDUH), conducted by the Substance Abuse and Mental Health Services Administration (SAMHSA), in 2015, of the 20.5 million Americans aged 12 years and above with a substance use disorder, approximately 2 million had a substance use disorder involving prescription pain relievers. Addiction to prescription drugs can be treated using cognitive behavior therapy (CBT), holistic therapies, individualized therapy or group therapy. Most patients are sent to a rehab facility or to counseling sessions where they can work their way to overcome any kind of addiction. Unfortunately, not many people have access to such services, and hence, are deprived of a holistic treatment. Study Identifies Factors Leading to Discontinuation of Treatment f..

Slide 1: Study Identifies Factors Leading to Discontinuation of Treatment for Opioid Addiction Earlier considered as a scourge specific to military veterans opioid addiction has today spread to each section of the society. 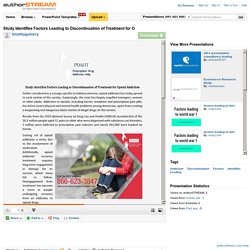 Surprisingly the crisis has largely engulfed teenagers women or older adults. Addiction to opioids including heroin morphine and prescription pain pills has led to severe physical and mental health problems among Americans apart from creating a burgeoning and dangerous black market of illegal drugs on the streets. Results from the 2015 National Survey on Drug Use and Health NSDUH revealed that of the 20.5 million people aged 12 years or older who were diagnosed with substance use disorders 2 million were addicted to prescription pain relievers and nearly 591000 were hooked on heroin. Getting rid of opioid addiction is tricky due to the involvement of medication. Slide 2: Study Identifies Factors Leading to Discontinuation of Treatment for … 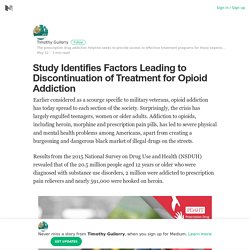 Surprisingly, the crisis has largely engulfed teenagers, women or older adults. Addiction to opioids, including heroin, morphine and prescription pain pills, has led to severe physical and mental health problems among Americans, apart from creating a burgeoning and dangerous black market of illegal drugs on the streets. Results from the 2015 National Survey on Drug Use and Health (NSDUH) revealed that of the 20.5 million people aged 12 years or older who were diagnosed with substance use disorders, 2 million were addicted to prescription pain relievers and nearly 591,000 were hooked on heroin.

Use of Smart Drugs to Boost Cognitive Skills is Rampant Among American Students. In today’s competitive world, most parents nurse a strong desire to see their children win in every sphere of life. 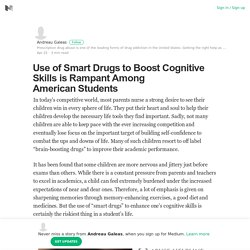 They put their heart and soul to help their children develop the necessary life tools they find important. Sadly, not many children are able to keep pace with the ever increasing competition and eventually lose focus on the important target of building self-confidence to combat the ups and downs of life. Many of such children resort to off label “brain-boosting drugs” to improve their academic performance. 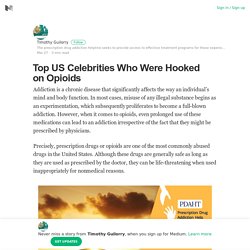 In most cases, misuse of any illegal substance begins as an experimentation, which subsequently proliferates to become a full-blown addiction. However, when it comes to opioids, even prolonged use of these medications can lead to an addiction irrespective of the fact that they might be prescribed by physicians. Take-Back Prescription Drug Programs Fail to Yield Desired Result, Says Study. One of the major contributors to the opioid epidemic in the United States is the illegitimate use of another person’s prescription drugs. 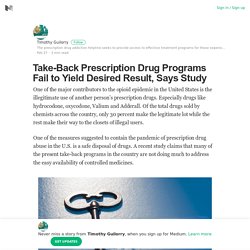 Especially drugs like hydrocodone, oxycodone, Valium and Adderall. Of the total drugs sold by chemists across the country, only 30 percent make the legitimate lot while the rest make their way to the closets of illegal users. Impulsive Personality Ups Risk For Abusing Meth at Younger Age, Says Study. An addiction is a perpetual battle of the mind and a lot depends on the mental attitude of an individual. 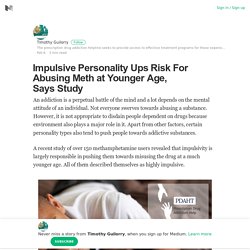 Not everyone swerves towards abusing a substance. However, it is not appropriate to disdain people dependent on drugs because environment also plays a major role in it. Apart from other factors, certain personality types also tend to push people towards addictive substances. A recent study of over 150 methamphetamine users revealed that impulsivity is largely responsible in pushing them towards misusing the drug at a much younger age. All of them described themselves as highly impulsive. Methamphetamine is a stimulant drug that affects the central nervous system and has a higher potentiality for abuse. 5 Factors That Influence Adderall Tolerance. Almost everyone who has ever used the stimulant Adderall, a combination drug for sleep disorder narcolepsy or attention deficit hyperactivity disorder (ADHD), is aware that the therapeutic effects of the drug are the highest when used for the first time. 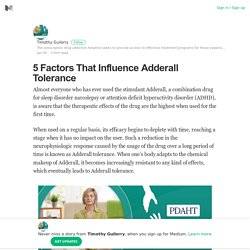 When used on a regular basis, its efficacy begins to deplete with time, reaching a stage when it has no impact on the user. How to Ensure Safe Disposal of Unused Prescription Medications. Prescription drugs are essential to treat any kind of health condition. 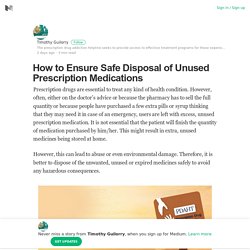 However, often, either on the doctor’s advice or because the pharmacy has to sell the full quantity or because people have purchased a few extra pills or syrup thinking that they may need it in case of an emergency, users are left with excess, unused prescription medication. It is not essential that the patient will finish the quantity of medication purchased by him/her. This might result in extra, unused medicines being stored at home. However, this can lead to abuse or even environmental damage. Therefore, it is better to dispose of the unwanted, unused or expired medicines safely to avoid any hazardous consequences. Leftover opioid painkillers are often shared leading to complications, suggests study - Prescription Drug Addiction Help.

Who would have thought that medication used for treating illnesses will one day be misused as a leisure drug? 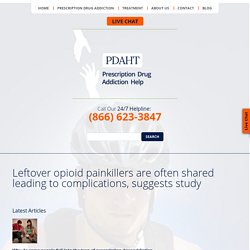 But the reality is that prescription drug abuse has grown to such an extent that the number of deaths reported due to prescription opioids in the United States tripled between 1999 and 2014, according to the Centers for Disease Control and Prevention (CDC). A number of factors are responsible for the acceleration of prescription drug abuse which predominantly includes the effects of these drugs such as feeling high, relieving tension and creating a sense of euphoria. A number of studies are being conducted in an attempt to understand the problem. One such study published in the June 2016 edition of the JAMA Internal Medicine journal, and conducted by the Johns Hopkins Bloomberg School of Public Health in Baltimore, reported that more than half of the patients who were prescribed opioid painkillers got more medication than they actually needed.

Dentists to Prescribe OTC Analgesics, Not Opioids – Timothy Guilorry – Medium. While the United States continues to reel under the epidemic of addiction to prescription pain relievers, fingers are also being raised at the dentists who are turning a blind eye to the issue. Although the prevailing laws don’t oversee how dentists manage pain for their patients, it is time for them to change their age-old prescribing strategies.

Addiction to Prescription Drugs — A Rising Concern in America – Medium. Studies have revealed that an alarmingly large number of American adults have been indulging in abuse or excessive use of prescription drugs. The country has woken up to the stark reality that overdoses of pain relievers, tranquilizers, stimulants and sedatives have actually claimed more lives than firearms or road accidents. Domestic Violence Awareness Month–Forcing prescription drugs on children in foster care akin to domestic violence - Prescription Drug Addiction Help. The increase in prescription drug abuse across the Unites States is the result of various factors.

Some of them include selling and sharing prescribed drugs among peers or doctors prescribing such medicines even for trivial issues. While the government agencies are trying to curb the crisis through various measures and awareness campaigns, reports have been filtering in of several foster care homes forcing prescription drugs on children including toddlers. This has added a new dimension to the threat of prescription drug abuse. According to a report by the California state auditor, “Nearly 12 percent of California’s more than 79,000 foster children were prescribed psychotropic medications during the fiscal year 2014-15.” These drugs included antipsychotics, antidepressants, and mood stabilizers. California has the largest population of foster care children in the country. Findings of the report As per the report, the situation of the foster care kids raised various concerns. US Witnesses Overdose Epidemic Involving Fentanyl — Reports – Medium. Fentanyl is a synthetic drug which is up to 100 times more powerful than morphine and is responsible for a spurt in overdose deaths in the United States.

These are mostly illegally made drugs which are addictive and cause an overdose in addicts. Though it has been in use since the 1960s for anesthetic purposes, it is now prescribed for cancer pain and other chronic ailments. After looking at the rising trend of fatalities from fentanyl, the U.S. Drug Enforcement Administration (DEA) and Centers for Disease Control and Prevention (CDC) issued a national alert in 2015, declaring illicitly manufactured fentanyl a threat to public health and safety.

It seems that people have been treading a wrong path in the fight against prescription drug abuse epidemic. According to a recent study, addicts discharged from hospital after overdose treatment seldom use the medicines that help in curbing opioid addiction. Using the right medication could have prevented relapses in many addicts. The researchers used the 2013 federal government data which reported that nearly 1.9 million Americans are now addicted to opioids, like OxyContin, Percocet, Vicodin, fentanyl, and heroin. Teens who abuse #prescriptiondrugs are more likely to abuse other drugs too,…