Angels A. Showthread. Paralda. Ghobe. If you stand at the edge of a silent glade on a winter's night, and look deep into the woodland beyond, you may catch a glimpse of a squat, goblin-like figure peering back at you in the glow of moonlight amongst the bracken. 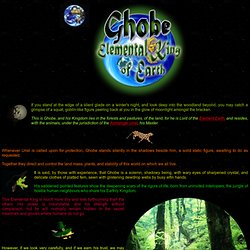 This is Ghobe, and his Kingdom lies in the forests and pastures, of the land, for he is Lord of the Element Earth, and resides, with the animals, under the jurisdiction of the Archangel Uriel, his Master. Whenever Uriel is called upon for protection, Ghobe stands silently in the shadows beside him, a solid static figure, awaiting to do as requested. Together they direct and control the land mass, plants, and stability of this world on which we all live.

It is said, by those with experience, that Ghobe is a solemn, shadowy being, with wary eyes of sharpened crystal, and delicate clothes of platted fern, sewn with glistening dewdrop webs by busy elfin hands. This Elemental King is much more shy and less forthcoming than the others. Home Page | Elemental Index : Main Index. Sandman. The Sandman is a mythical character in central and northern European folklore who brings good dreams by sprinkling magical sand onto the eyes of children while they sleep at night. 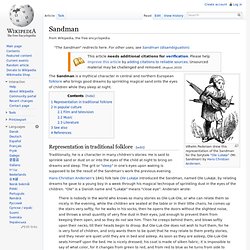 Representation in traditional folklore[edit] Traditionally, he is a character in many children's stories. He is said to sprinkle sand or dust on or into the eyes of the child at night to bring on dreams and sleep. The grit or "sleep" in one's eyes upon waking is supposed to be the result of the Sandman's work the previous evening.

Hans Christian Andersen's 1841 folk tale Ole Lukøje introduced the Sandman, named Ole Lukøje, by relating dreams he gave to a young boy in a week through his magical technique of sprinkling dust in the eyes of the children. There is nobody in the world who knows so many stories as Ole-Luk-Oie, or who can relate them so nicely. E.T.A. In popular culture[edit] Demon sigils. Fotamecus. Fotamecus Empowerment Rite. By Fenwick Rysen 25 October 1997 Introduction: 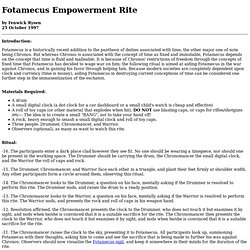 Time Consumption -or- Yet Another Fotamecus Rite. By Fenwick Rysen 23 June 1999 OBJECTIVE: To draw the power of the Fotamecus time manipulation egregore into the participants and thus imbue them with the ability to distort time. 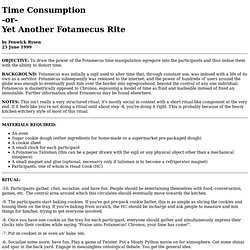 BACKGROUND: Fotamecus was initially a sigil used to alter time that, through constant use, was imbued with a life of its own as a servitor. Fotamecus subsequently was released to the internet, and the power of hundreds of users around the globe was enough to eventually push him over the border into egregorehood, beyond the control of any one individual. Fotamecus is diametrically opposed to Chronos, espousing a model of time as fluid and malleable instead of fixed an immutable. Further information about Fotamecus may be found elsewhere. NOTES: This isn't really a very structured ritual; it's mostly social in context with a short ritual-like component at the very end. 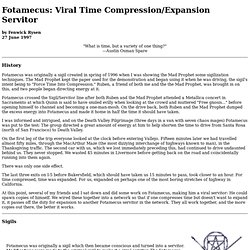 " ---Austin Osman Spare History Fotamecus was originally a sigil created in spring of 1996 when I was showing the Mad Prophet some sigilization techniques. The Mad Prophet kept the paper used for the demonstration and began using it when he was driving, the sigil's intent being to "Force Time Into Compression. " Fotamecus crossed the Sigil/Servitor line after both Ruben and the Mad Prophet attended a Metallica concert in Sacramento at which Quinn is said to have smiled evilly when looking at the crowd and muttered "Free gnosis... " before opening himself to channel and becoming a one-man-mosh. I was informed and intrigued, and on the Death Valley Pilgrimage (three days in a van with seven chaos mages) Fotamecus was put to the test: The group directed a great amount of energy at him to help shorten the time to drive from Santa Rosa (north of San Francisco) to Death Valley.

There was only one side effect. Sigils Notes. Ellis linking sigil. Baphomet. Choronzon. Spelling variations[edit] Choronzon according to Crowley[edit] Otherwise known as the Demon of Dispersion, Choronzon is described by Crowley as a temporary personification of the raving and inconsistent forces that occupy the Abyss.[1][5] In this system, Choronzon is given form in evocation only so it may be mastered. 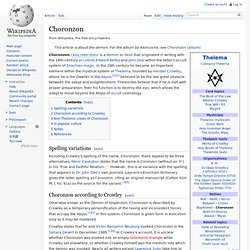 Crowley states that he and Victor Benjamin Neuburg evoked Choronzon in the Sahara Desert in December 1909.[1][6] In Crowley's account, it is unclear whether Choronzon was evoked into an empty Solomonic triangle while Crowley sat elsewhere, or whether Crowley himself was the medium into which the demon was invoked. Nearly all writers except Lawrence Sutin take him to mean the latter.

In the account, Choronzon is described as changing shape, which is read variously as an account of an actual metamorphosis, a subjective impression of Neuburg's, or fabrication on Crowley's part. Primary Node Of The Choronzon Project.