The mark cuban weblog. Why Are So Many Middle-Aged White Americans Dying. Bridgewater Associates Ray Dalio Principles. Everything About Everything: David Foster Wallace’s ‘Infinite Jest’ at 20. [On this week’s Inside The New York Times Book Review podcast, Tom Bissell and the editor Michael Pietsch discuss “Infinite Jest.”] 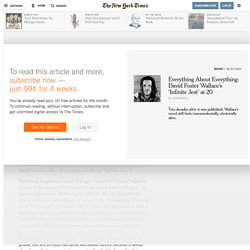 Something happens to a novel as it ages, but what? It doesn’t ripen or deepen in the manner of cheese and wine, and it doesn’t fall apart, at least not figuratively. Fiction has no half-life. Morgan Stanley Provides Billionaire Steven Cohen With Loan Secured by Art. Photo Steven A. 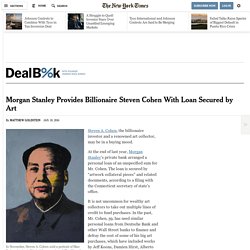 Cohen, the billionaire investor and a renowned art collector, may be in a buying mood. At the end of last year, Morgan Stanley’s private bank arranged a personal loan of an unspecified sum for Mr. Cohen. The loan is secured by “artwork collateral pieces” and related documents, according to a filing with the Connecticut secretary of state’s office. It is not uncommon for wealthy art collectors to take out multiple lines of credit to fund purchases. Two years ago, Goldman Sachs provided Mr. . , however, is providing a line of credit to Mr. App Makers Reach Out to the Teenager on Mobile. Obsession on Ice: How One Harvard Kid Survived His Stanley Cup Dreams. It didn’t start in a small Canadian town on a frozen pond in a backyard, but rather at Lasker Rink, an outdoor swimming pool located on the northern end of Central Park in New York City. 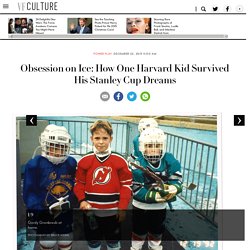 On my fifth birthday, and after a year of pleading, Mom and Dad bought me a pair of skates and a hockey stick, and we ventured a mile up Fifth Avenue to give it a go. When I set foot on that frozen-over pool, I was gone. It was love at first stride. Skating mostly on my ankles, I chased the puck all over the rink except the corners, not because I was scared to get hit, but because I was afraid I’d get my foot caught in the six-inch rut that separated the boards from the ice surface. The undulations on the non- hazardous portions of the ice rivaled the Augusta National greens, though I bet Augusta is higher on the Stimpmeter. How an F Student Became America’s Most Prolific Inventor — Bloomberg Business. By Ashlee Vance | October 20, 2015 “It’s really a one-person sort of vehicle,” says Lowell Wood, right after he offers me a lift back to my hotel. 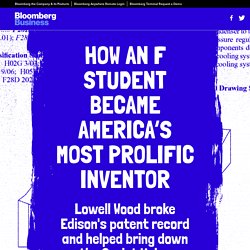 His brown 1996 Toyota 4Runner, parked outside his office building in Bellevue, Washington, has 300,000-plus miles on the odometer and looks it. Garbage bags full of Lord-knows-what take up most of the back. He squeezes his paunchy, 6-foot-2-inch frame behind the wheel and, using his cane, whacks away papers, more bags, and an ’80s-vintage car phone to clear some room on the passenger side. What ISIS Really Wants. What is the Islamic State?

Where did it come from, and what are its intentions? The simplicity of these questions can be deceiving, and few Western leaders seem to know the answers. In December, The New York Times published confidential comments by Major General Michael K. Nagata, the Special Operations commander for the United States in the Middle East, admitting that he had hardly begun figuring out the Islamic State’s appeal. “We have not defeated the idea,” he said. The group seized Mosul, Iraq, last June, and already rules an area larger than the United Kingdom. Our ignorance of the Islamic State is in some ways understandable: It is a hermit kingdom; few have gone there and returned.

The Islamic State, also known as the Islamic State of Iraq and al-Sham (ISIS), follows a distinctive variety of Islam whose beliefs about the path to the Day of Judgment matter to its strategy, and can help the West know its enemy and predict its behavior. What ISIS Really Wants. Stop Googling. Let’s Talk. One 15-year-old I interviewed at a summer camp talked about her reaction when she went out to dinner with her father and he took out his phone to add “facts” to their conversation. 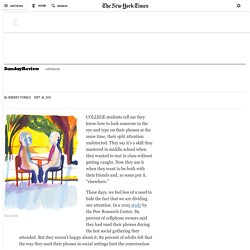 “Daddy,” she said, “stop Googling. I want to talk to you.” A 15-year-old boy told me that someday he wanted to raise a family, not the way his parents are raising him (with phones out during meals and in the park and during his school sports events) but the way his parents think they are raising him — with no phones at meals and plentiful family conversation. One college junior tried to capture what is wrong about life in his generation. “Our texts are fine,” he said. Photo It’s a powerful insight. In 2010, a team at the University of Michigan led by the psychologist Sara Konrath put together the findings of 72 studies that were conducted over a 30-year period.

Across generations, technology is implicated in this assault on empathy. The trouble with talk begins young. But we are resilient.