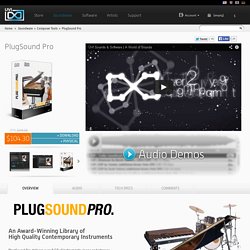 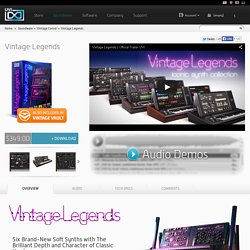 At UVI we've been producing sound for over 20 years and designing our own software for over 12. Synth Anthology II - Hardware Synthesizer Tour de Force. Sonic Perfection While the differences between hardware and emulation can be discernible the difference between a straight signal and mastered recording can be night and day. 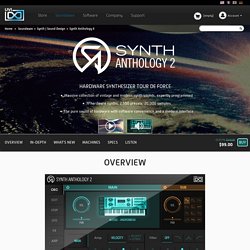 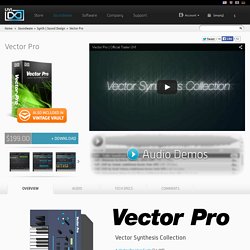 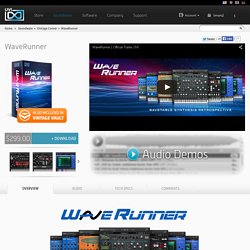 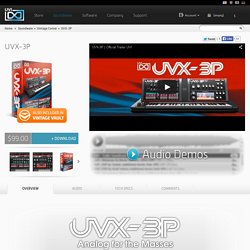 The JX-3P signaled a shift away from control dense synths like the JUNO and JUPITER series for a less intimidating, more entry-level aesthetic aimed at players who wanted the Roland sound without being distracted by a slew of controls. That said the JX-3P was in no way technically inferior, offering many of the same components as its more expensive siblings‚ it even boasted dual DCO's per-voice compared to a single in the JUNO series making it somewhat of a sleeper powerhouse.

Not as pervasive as the JUNO series, the JX-3P was still a very capable and expressive instrument used by many well known pop acts such as Stevie Nicks, Vince Clark and The Cure as well as electronica pioneers Orbital and The Future Sound of London. UVX-3P was developed with the same care and thoroughness as our other Vintage series instruments. UltraMini - The Authentic Analog Sound. UltraMini 1.5 is here, bringing with it over 200 new factory patches, a significantly optimized low-CPU mode and computer-based authorization. 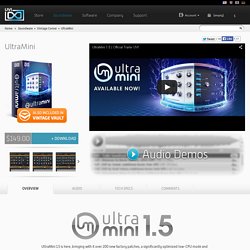 Two legendary analog synths with the ultimate convenience of digital—now leaner, meaner and easier to use than ever! The Beauty of Firsts ⬇ UltraMini User Guide (2.9 MB) There's something evocative and mysterious about firsts. Normal people will recall their first pet, first crush or their first kiss. The Beast - Virtual FM Synthesis Instrument. Rewind to 1975 ... 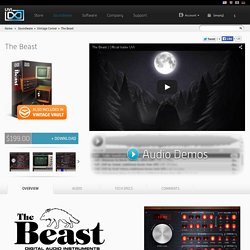 A machine of luxury is birthed for the musical elite. Using electronics developed for NASA, this revolutionary instrument was unprecedented for its time. Starting off its life as a gorgeous FM synth, it evolved into a comprehensive workstation through subsequent expansions. Its emergence into the professional studio inspired many of the leading avant-garde artists and sonic visionaries to embrace its potential, including Frank Zappa, Chick Corea, Michael Jackson, Sting, Kraftwerk, Stevie Wonder, and Depeche Mode, among others. ... Once again inspired by the sounds of yesteryear, we at UVI have set out to construct our own 'beast'. String Machines - Vintage String Synths Collection. A Library of Samples from 11 Renowned String Synths Back in the 70's, leading keyboard designers around the world attempted to reproduce orchestral string sounds through analog synthesis. 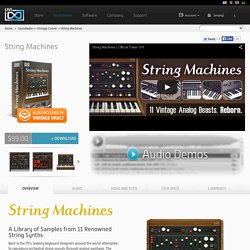 The results were far from their original intent but were in no way failures. Used on countless cult records and engrained in our collective memory to this day, these 'String Machines' bore an analog soul on their own. We spent countless hours working to faithfully capture these analog souls and present them in an accessible, expressive, fully editable digital tool. So was born String Machines; a hybrid instrument, forged with the analog imprint of the 11 most musical string synthesizers ever built. UVI String Machines is your doorway to a grand collection of analog gems from some of the most esteemed synth pioneers of our time. 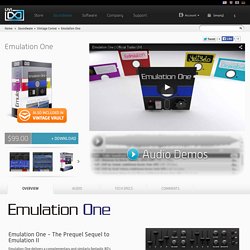 They signaled more than a shift in interaction with our musical counterparts‚ they ushered in the era of the digital synth. To those willing to forgo the immediacy and ease-of-editing of the analog synth world these keyboards offered amazing features for the time; massive polyphony, extensive on-board sequencers and pattern memory, removable storage and digital effects. In addition to the immediate benefits of digital processing some of these keyboards also dawned innovative hybrid synthesis techniques, combining sample playback with classic methods allowing synthesists and musicians the opportunity to explore new sonic territory. 4 Classics, Massive Patch Library ⬇ Digital Synsations User Guide (2.1 MB) Digital Synsations Vol. 2 - Digital Mavericks of the 90s Revisited. Digital artefacts The influx of new synthesis techniques gave way to many phenomenal and unique synthesizers.

In fact, so many were released in such a short time that a number of truly great keyboards were lost to the spotlight. It’s a passion of ours to unearth and explore these gems, as they each have a truly unique signature and many of them are becoming lost to time. We’re both proud and excited to share these sonic treasures with you. For some they will be a reunion, for others they will be completely new, in both cases we look forward to hearing their voices come alive as music once again. An inspired touch. UVI Darklight IIx - Powerful Vintage Music Workstation. A Collection of Three Instruments Inspired by The Legendary Studio Icon Costing upwards of $100,000, the dream machine of the 80's was unattainable by most. Used by countless prominent artists including: Peter Gabriel, David Bowie, Michael Jackson, Kate Bush, Herbie Hancock, Jean Michel Jarre, Thomas Dolby and many more, it remains a highly regarded and sought after instrument.

Suffering a fit of nostalgia as we often do, we decided to set about making a new instruments inspired by this legendary studio icon. We ended up making 3; a digital synth, digital drum machine, and multi-phraser. A unique hybrid approach was employed combining our rigid sampling process with the advanced digital processing algorithms and modeling capabilities of the UVI Engine. Powerful analog modeled filters, LFO's, envelopes and effects in a beautiful old-school interface await you in this tightly packed but massive sounding 2 GB UVI instrument. Cameo - Phase Distortion Suite.

Whether you're a fan of classic '80s synth sounds, a phase distortion buff, or just looking to expand your palette of go-to sounds, Cameo delivers a treasure of new and delightful tones with the unmistakable character of some of our favorite synths. Also available in the Vintage Vault 2 bundle A comprehensive collection of 50 instruments, 111 drum machines and over 7,000 hand-crafted presets giving you the most important synth and drum machines sounds from the last 50 years. Experience the authentic sounds of vintage hardware instruments with all the simplicity of software.

BeatBox Anthology 2 - Hardware Drum Machine Tour De Force. User Testimonials. UVX80 - ‘80s Japanese Maiden Revived. Due to the limited production of the original machines very few are left today, with even fewer in working condition. Our UVI Japan office was able to secure a pristine model, making sure it was calibrated to factory specs before passing to our sound design team.

Once here in Paris, we pushed it to its limits, designing tones from classic to modern and letting the unique character of this synth shine. Recordings we made using the highest-quality processors and converters available, resulting in a fantastically rich and vivid library to serve as the basis for UVX80. Once loaded into the UVI Engine our sound designers further polished these patches creating the hybrid instrument we proudly present to you today. UVS-3200 - Tribute to the KORG PS-3200. User Testimonials "Sounds so good, and very inspiring presets. I have a feeling that this will be one of my most used UVI libraries. It has much of the gentle softness I enjoy… but also provides some bite and grit on top of it. PX Apollo - Forebear of the Polyphonic Analog. OB Legacy - Homage to a Synthesizer Luminary. User Testimonials “I am now in sampled Oberheim heaven....especially the Matrix 12.”— Quantum7, Gearslutz.