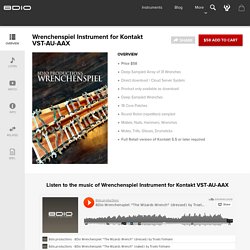 The wrenches were modified (carved) to be in perfect tune and we managed to get some of them to sustain their notes up to 10 seconds. The wrenches were played with everything from soft to hard mallets, muted variations, hammers, hotrods, modified metal objects, other wrenches, nails, drumsticks and we even ran electricity through the wrenches for extra punishment. The end-result is a highly versatile, tonal percussion instrument that can sound like anything from a Glockenspiel to Celeste, from traditional Rhodes to absolutely brutal mutilated music sound design. The Wrenchenspiel contains 18 different core articulations and over 1.200 samples. In addition the library also contains a step-based sequencer (aka Wrenchenquencer/arp), live-triggered FX (ex. Komplete : Cinematic : Balinese Gamelan. Often translated as "Orchestra", Gamelan is an ensemble of instruments from Indonesia, typically Java or Bali. 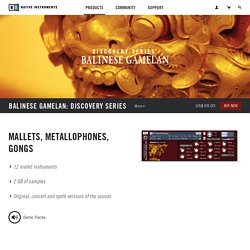 Ensembles can differ significantly, but would be often made up of a combination of metallophones, xylophones, drums and gongs; bamboo flutes, bowed and plucked strings, or even a vocalist. Each instrument has been built and tuned for playing in that specific ensemble, so tunings can differ considerably between Gamelans. One of the most distinctive aspects of Balinese gamelan is that each instrument is paired, and the pairs are slightly detuned. This results in a natural beating between the instruments - perhaps the oldest chorus effect on the planet. Resonance by Impact Soundworks (VST, AU, AAX) Concept When we set out to create a new library built from custom, unique instruments, we were initially planning on just a few deep-sampled sounds. 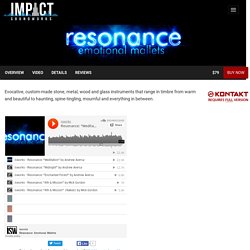 However, as the vision for Resonance became clearer, we decided that a whole collection of such deep-sampled instruments would be an incredible tool for all types of composers and producers working in any number of genres. As the recording sessions progressed, we constantly experimented with new techniques, mics and tools; each new sound we discovered was inspiring and had to be included. As we combed through the recordings, we found that the wealth of sounds were ripe for further sound design.

SC Bowed Gamelan. The Wrong Way Can Be The Right Way Following a Soniccouture tradition of playing instruments the wrong way, we present this unique library of a Bowed Gamelan instrument. 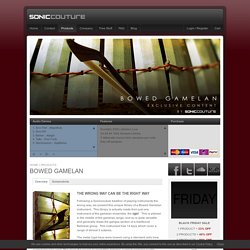 This library is actually made from just one instrument of the gamelan ensemble, the ugal. This is pitched in the middle of the gamelan range, and so is quite versatile and generally leads the gangsa section of a traditional Balinese group. This instrument has 14 keys which cover a range of almost 3 octaves. The metal Ugal keys were bowed using a standard cello bow, vertically across the thin edge of the metal. The Sampled Instrument The instrument was sampled at 44.1kHz, 24 bit, in mono. Any products marked Exclusive Content ( XC ) are available FREE with your first purchase - if you buy one standard product, you can choose 1 XC product, if you buy 2 products, you get two XC products, and so on. VibysM. The VibysM is a 3 1/2 octaves Musser concert vibraphone. 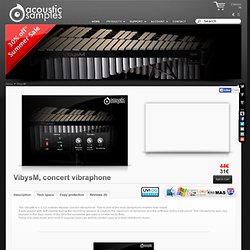 This is one of the best vibraphone models ever made. It was played with soft mallets during the recording session to capture the maximum of dynamics and the softness of this instrument. The Vibraphone was very popular in the Jazz music of the 50's but somehow got used a lot less since then. Today it is used more and more in popular music as well as modern jazz and even electronic music. Sample player Technical description 913Mb uncompressed, 423Mb compressed in lossless flac format, around 411 samples. Recorded with in ORTF configuration for a full stereo image. 9 velocity layers for the sustain. 3 velocity layers for the releases.

Sustain pedal noises (up and down), triggered automatically. 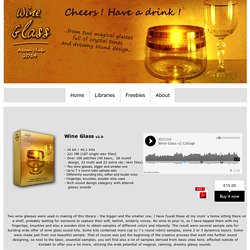 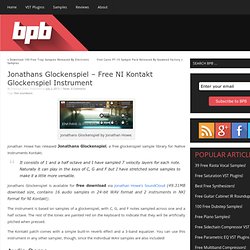 Jonathan Howe has released Jonathans Glockenspiel, a free glockenspiel sample library for Native Instruments Kontakt. It consists of 1 and a half octave and I have sampled 7 velocity layers for each note. Naturally it can play in the keys of C, G and F but I have stretched some samples to make it a little more versatile. Jonathans Glockenspiel is available for free download via Jonathan Howe’s SoundCloud (49.31MB download size, contains 16 audio samples in 24-bit WAV format and 2 instruments in NKI format for NI Kontakt).