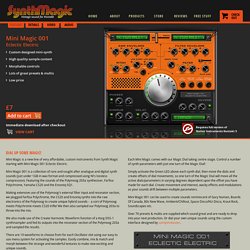 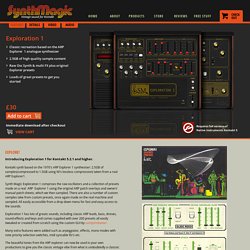 Kontakt synth based on the 1970's ARP Explorer 1 synthesiser: 2.5GB of samples(compressed to 1.5GB using NI's lossless compression) taken from a real ARP Explorer1. Synth Magic Exploration 1 comprises the raw oscillators and a collection of presets made on a real ARP Explorer 1 using the original ARP patch overlays and owners' manual patch sheets, which we then sampled. There are also a number of custom samples take from custom presets, once again made on the real machine and sampled. OB. Requires full version ofNative Instruments Kontakt 5 Custom instrument based on Legendary Tom Oberheim classics 2GB of high quality sample content Extensive Synth, Modulation and Effects, Sequencer & Arpeggiator with store and recall features over 200 presets included OB is a Kontakt 5.2.1 (or higher) library of sounds from the Oberheim Expander and Marion Systems MSR-2 Synthes, with over 2GB of 24-bit .wav samples. 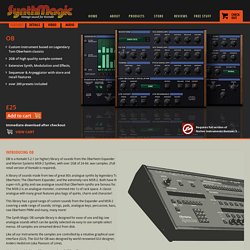 (Full retail version of Kontakt is required). A library of sounds made from two of great 80s analogue synths by legendary Tom Oberheim; The Oberheim Expander, and the extremely rare MSR-2. SID Vicious. SID Vicious uses sounds taken from a Commodore 64. 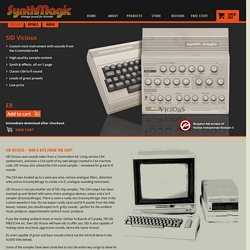 Using various C64 synthesisers, and even a C64 synth of my own design created in C64 machine code. SID Vicious also utilised the C64 sound sampler – renowned for great lo-fi sounds. The C64 was hooked up to a valve pre-amp, various analogue filters, distortion units and an Ensoniq Mirage to create a lo-fi, analogue-sounding instrument. Zed 80 Vol.2. 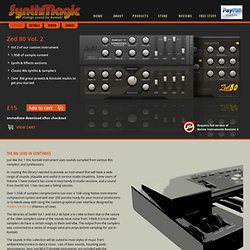 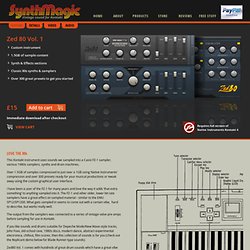 Over 1.5GB of samples compressed to just over a 1GB using Native Instruments’ compression and over 300 presets ready for your musical productions or tweak away using the custom graphical user interface. I have been a user of the FZ-1 for many years and love the way it adds ‘that extra something’ to anything sampled into it. The FZ-1 and other older, lower bit rate samplers have a great effect on sampled material - similar to the EMU SP12/SP1200. What gets sampled in seems to come out with a certain vibe, hard to describe, but works really well. The output from the samplers was connected to a series of vintage valve pre-amps before sampling for use in Kontakt. Zed80 Vol. 1 comes with hundreds of great drum sounds which have a great vibe to them and they have all been mapped into ready-to-use kits. 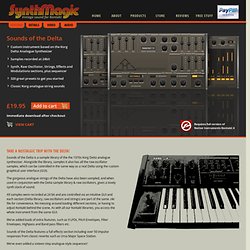 Alongside the library, samples it also has all the raw oscillator samples, which can be controlled in the same way as a real Delta using the custom graphical user interface (GUI). The gorgeous analogue strings of the Delta have also been sampled, and when used in conjunction with the Delta sample library & raw oscillators, gives a lovely synth stack of sound. All samples were recorded at 24 bit and are controlled via an intuitive GUI and each section (Delta library, raw oscillators and strings) are part of the same .nki file for convenience. We’ve even added a sixteen step analogue-style sequencer! Phobos II. We’re very proud to announce Phobos Interstellar Fanatasy II for Kontakt 4.2.3 and higher (including Kontakt 5). 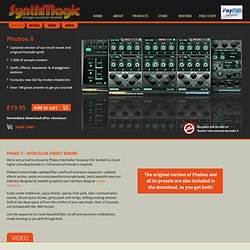 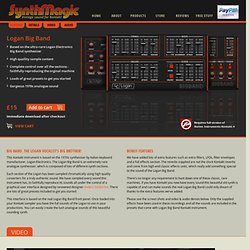 The Logan Big Band is an extremely rare analogue synthesiser, which is composed of lots of different synth sections. Each section of the Logan has been sampled chromatically using high quality converters for a truly authentic sound. We have sampled every sound this instrument has, to faithfully reproduce its sounds all under the control of a graphical user interface designed by renowned designer Anders Hedström.

This interface is based on the real Logan Big Band front panel. There's no longer any requirement to hunt down one of these classic, rare machines. PE-3000. Synth Magic presents PE-3000 for Kontakt 5.0.3 or higher (full retail version of Kontakt is required). 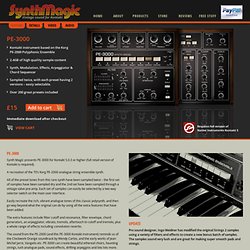 A recreation of the 70’s Korg PE-2000 analogue string ensemble synth. All of the preset tones from this rare synth have been sampled twice – the first set of samples have been sampled dry and the 2nd set have been sampled through a vintage valve pre-amp. Each set of samples can easily be selected by a two way selector switch on the main user interface. Easily recreate the rich, vibrant analogue tones of this classic polysynth, and then go way beyond what the original can do by using all the extra features that have been added. The extra features include filter cutoff and resonance, filter envelope, chord generators, an arpeggiator, vibrato, tremolo, aftertouch to cutoff and tremolo, plus a whole range of effects including convolution reverbs. Logan Vocalist. Requires full version ofNative Instruments Kontakt 4 Custom instrument based on the Logan Electronics Vocalist synthesizer High quality sample content Lovely, analogue choral sounds Chord generator Loads of great presets to get you started This Kontakt instrument is based on the extremely rare 1970s Logan Vocalist Synthesiser.

It has taken many years to source this very reclusive synthesise. Being so rare, there is not even much information on the web about it, so we really were very lucky to find one. Jen SX3000. Requires full version ofNative Instruments Kontakt 4 Custom instrument based on the fantastic Jen SX1000 Synthetone mono synth High quality sample content Random preset generator All new sequencer with save/load mode Over 200 great presets to get you started This Kontakt instrument based on the fantastic little Italian, budget mono synth- the Jen SX 1000 Synthetone.

We took classic old synthesizers such as such as the Korg DSS-1, Kawai K5, Sid Chip, Casiotone 1000p Additive Synth, Evolution EVS1, some Quasimidi synths and even a Yamaha CX5M, added some modern vibe from a Moog Little Phatty, and sampled them all through valve pre-amps to bring you Digital Love Child. There's almost 2GB of samples taken from these synthesisers, with all waveforms accessible from the rather funky custom GUI. The small computer memory footprint, due to streaming the samples direct from your hard disk, makes DLC very useable.

Sounds of the Quadra. Requires full version ofNative Instruments Kontakt 4 Custom instrument based on the legendary 1978 ARP Quadra Over 500 presets included Synth & Effects sections, plus separate Bass & Sequencer section Beautiful custom interface The 1970’s ARP Quadra synthesiser was used on countless disco records, funk, John Carpenter soundtracks, Genesis albums, soul, New Order records, Gary Numan’s Micro Music tour, Joe Zawinul. Jean Michel Jarre made great use of it. The list is almost endless. Before now, if you wanted the great sounds of this rare and much sought after synthesiser, you had to pay a small fortune for the real machine (that’s if you could find one working).