Glitch Hero. ARC - Evolving Soundscapes & Drones. Noiiz. Rise & hit. NI's latest library aims to keep you on the edge of your seat with its range of cinematic tension-builders. 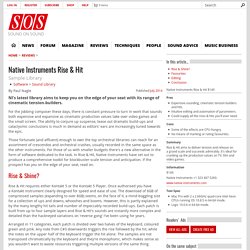 For the jobbing composer these days, there is constant pressure to turn in work that sounds both expensive and expansive as cinematic production values take over video games and the small screen. The ability to conjure up suspense, tease out dramatic build-ups and cataclysmic conclusions is much in demand as editors' ears are increasingly tuned towards the epic. Those fortunate (and affluent) enough to own the top orchestral libraries can reach for an assortment of crescendos and orchestral crashes, usually recorded in the same space as the other instruments. For those of us with smaller budgets there's a new alternative in the form of software dedicated to the task. In Rise & Hit, Native Instruments have set out to produce a comprehensive toolkit for blockbuster-scale tension and anticipation. Rise & Shine? Rise & Hit requires either Kontakt 5 or the Kontakt 5 Player. 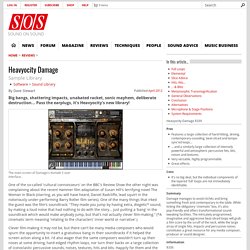 Pass the earplugs, it's Heavyocity's new library! The main screen of Damage's Kontakt 5 user interface.. Evolve r2. Evolve is a collection of loops, pads and hits ideal for productions where impact is vital. 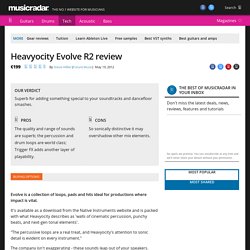 It's available as a download from the Native Instruments website and is packed with what Heavyocity describes as 'walls of cinematic percussion, punchy beats, and next-gen tonal elements'. "The percussive loops are a real treat, and Heavyocity's attention to sonic detail is evident on every instrument. " The company isn't exaggerating - these sounds leap out of your speakers. 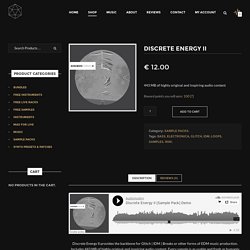 Includes 443 MB of highly original and inspiring audio content. Every sample is as usable and fresh as humanly possible. All of the loops are 100% Royalty-Free (including the vocal loops) Categories BassBeatsPercussionSynths Tech Specs • WAV Files • 48 kHz/24-Bit • PC/Mac Compatible • Royalty-Free (No Exceptions) Summary Size : 443 MB • 119 Pristine Sound, Deeply Editable Audio Loops Sample Resolution 48kHz / high quality 24 Bit How do I download my purchase? It will be sent to the email you use for purchase.

Altered States. Untitled. Untitled. Terminalhead's Underfire Vol 2. This is a DOWNLOAD ONLY product. 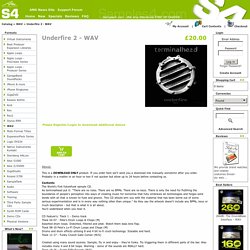 If you order here we'll send you a download link manually sometime after you order. Probably in a matter or an hour or two if not quicker but allow up to 24 hours before contacting us. Contents The World's first futurefunk sample CD.As terminalhead put it: "There are no rules. Electric Dreamz. Odyssey. Si Begg Extreme Environments. Epic Horizons Cinematic Atmospheres. Back in May 2010, SOS ran a review of Zero-G's Dark Skies, giving it a whopping five stars, and the sleeve notes of Epic Horizons boldly claim that it is 'even bigger and better'.There's certainly no denying that it's big in terms of gigabytes. 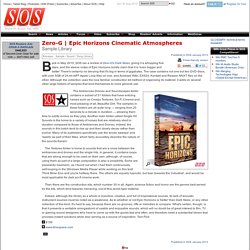 The case contains not one but two DVD discs, with over 5GB of 24-bit AIFF Apple Loop files on one, and Acidised WAV, EXS24, Kontakt and Reason NNXT files on the other. Although the collection uses the now familiar construction kit method of organising its material, it adds on several other large folders of samples that lend themselves to more general use. 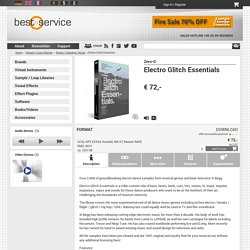 Electro Glitch Essentials is a roller-coaster ride of bass, beats, beds, cuts, hits, noises, fx, loops, impulse responses, wipes and swells for those dance producers who want to be at the forefront of their art, challenging the boundaries of musical creativity. The library covers the more experimental end of all dance music genres including techno electro / breaks / fidget / glitch / trip hop / IDM / dubstep but could equally well be used in TV and film soundtrack. Si Begg has been releasing cutting edge electronic music for more than a decade. Spaceology. For Kontakt 5.3.1.37 + (ONLY WORKS IN DEMO MODE IN KONTAKT PLAYER) Spaceology contains 13 patches for Kontakt 5+ from space... no, really! 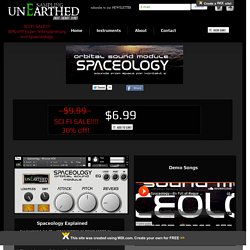 The patches are all derived from the actual NASA recordings recently released into the public domain (this instrument is in no way endorsed by NASA). Interplanetary Glass Bowl. For Kontakt 5.3.1.37 + (ONLY WORKS IN DEMO MODE IN KONTAKT PLAYER) Inspired heavily by scores like Interstellar and Solaris, Interplanetary features cinematic multisamples taken from an antique glass bowl which have been turned into something otherworldly. 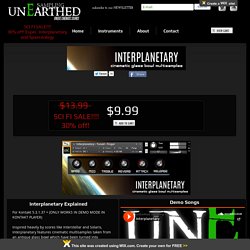 For this instrument we struck the bowl with fingers, sticks, and mallets and each patch not only contains 6 round robins, but has also been carefully tuned to give you maximum flexibility as a composer. The 16 patches cover a wide variety of playing styles including the tuned struck patches mentioned above as well as etheral pads and even a couple of patches we derived from bowing the bowl with a cello bow. For an added bonus, there is also a low and hard hitting multisampled analogue synth bass patch which is good for underlaying these instruments... or the instruments / libraries of your choosing.

Forgotten Songs. For the FULL Version of Kontakt 4.2.4.5316+ (ONLY WORKS IN DEMO MODE IN KONTAKT PLAYER) Atonal Chaos. 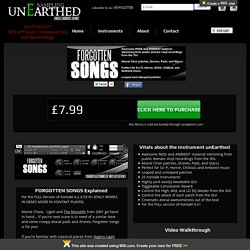 Ligeti and The Monolith from 2001 go hand in hand... if you're next score is in need of a similar tone and some creepy atonal pads and drones, Forgotten Songs is for you! If you're familiar with classical pieces from Gygory Ligeti such as Lux Aeterna... then you already know what to expect with FS. This sort of ever evolving creeptastic choir vibe is the sound we were after for the library... albeit a bit more synthetic in tone. Tonehammer Bees. Strange Worlds. Glisten. Atom Hub The Planet. - 16 bit / 44,1 kHz- 148 MB (37 single wav files)- 99 patches (88 single nki, 11 multi)- semihollow el. guitar samples- from soft pads to harsh space engines - attack/release, filter, reverb, phaser, delay and other FX GUI controls- flickering Planet beyond the aperture :-) "We have travelled long and far to reach this planet.

Jeff has worked extremely hard to provide you the most original and inspiring glitch content possible. This product includes loops and samples that will work within the following genres: Ambient, Glitch, Gothic, Hip Hop, Trip Hop, Dubstep, Drum and Bass, Grime, Industrial and Techno. Tempos range from 75 BPM to 165 BPM, with the majority of loops falling in the 90-120 BPM range. Future Music Review (January 2010 Edition) "Producer Jeff Rhodes delivers the goods again with this highly original library of beats, loops and riffs. About the Producer: MP3 Demo: Ambient Fractals. Engineered to capture the true essence of ambience, "Ambient Fractals" will twist you through the mathematics of sound, bringing you a mesmerizing selection of waveform manipulations and spaced out oscillations from the sublime side of synthesis.

Granular Bottles Bolder Sounds. Zero-G: Heaven 17. Until 26 December this product is a FREE Christmas gift to all our customers! Simply add it to your cart and use code "FREEBIE" at the checkout, which will reduce the price to zero. From the personal library of Heaven 17, the sounds in this ethereal collection evade easy categorization by disregarding conventional musical genre groupings.