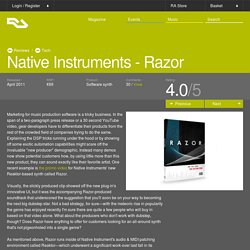 In the span of a two-paragraph press release or a 30 second YouTube video, gear developers have to differentiate their products from the rest of the crowded field of companies trying to do the same. Explaining the DSP tricks running under the hood or by showing off some exotic automation capabilities might scare off the invaluable "new producer" demographic. Instead many demos now show potential customers how, by using little more than this new product, they can sound exactly like their favorite artist.

One recent example is the promo video for Native Instruments' new Reaktor-based synth called Razor. Visually, the slickly produced clip showed off the new plug-in's innovative UI, but it was the accompanying Razor-produced soundtrack that underscored the suggestion that you'll soon be on your way to becoming the next big dubstep star. The unique additive synthesis implementation isn't Razor's only unique feature, though. RA Reviews: Native Instruments - Form (Tech) When Native Instruments announced the latest incarnation of their behemoth Komplete suite in August, a new synthesiser called Form grabbed my attention. 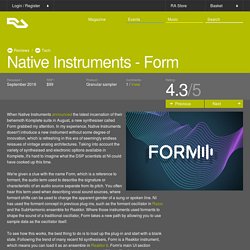 In my experience, Native Instruments doesn't introduce a new instrument without some degree of innovation, which is refreshing in this era of seemingly endless reissues of vintage analog architectures. Taking into account the variety of synthesised and electronic options available in Komplete, it's hard to imagine what the DSP scientists at NI could have cooked up this time. We're given a clue with the name Form, which is a reference to formant, the audio term used to describe the signature or characteristic of an audio source separate from its pitch.

You often hear this term used when describing vocal sound sources, where formant shifts can be used to change the apparent gender of a sung or spoken line. To see how this works, the best thing to do is to load up the plug-in and start with a blank slate. Reaktor 6. After 10 years with no major updates, Reaktor bursts back into the spotlight with the ultimate virtual modular rack. 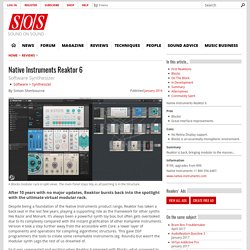 Despite being a foundation of the Native Instruments product range, Reaktor has taken a back seat in the last few years, playing a supporting role as the framework for other synths like Razor and Monark. It’s always been a powerful synth toy box, but often gets overlooked due to its complexity compared with the instant gratification of other Komplete instruments.

Version 4 took a step further away from the accessible with Core: a lower layer of components and operations for compiling algorithmic structures. This gave DSP programmers the tools to create some remarkable instruments (eg. Rounds) but wasn’t the modular synth Lego the rest of us dreamed of. So it was unexpected and exciting when Reaktor 6 emerged with Blocks: what appeared to be a software simulation of a Eurorack-style modular synth environment. First Reaktions Blocks On The Block So what exactly is/are Blocks? RA Reviews: Native Instruments - Flesh (Tech) When Native Instruments recently revealed Flesh, their third collaboration with the cross-genre producer and programmer Tim Exile, I was a bit confused. 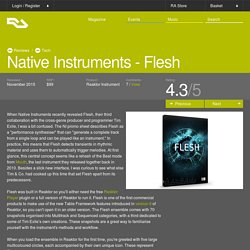 The NI promo sheet describes Flesh as a "performance synthesiser" that can "generate a complete track from a single loop and can be played like an instrument. " In practice, this means that Flesh detects transients in rhythmic material and uses them to automatically trigger melodies. At first glance, this central concept seems like a rehash of the Beat mode from Mouth, the last instrument they released together back in 2010. Besides a slick new interface, I was curious to see what else Tim & Co. had cooked up this time that set Flesh apart from its predecessors. Flesh was built in Reaktor so you'll either need the free Reaktor Player plugin or a full version of Reaktor to run it.

When you load the ensemble in Reaktor for the first time, you're greeted with five large multicoloured circles, each accompanied by their own unique icon.