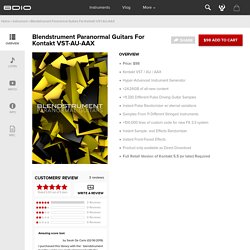 Blendstrument Paranormal Guitars is a distinctive Cinematic Pulse Design Tool, designed to create those unique blockbuster pulses we all need, but with a twist. The library contains our highly advanced randomization feature – allowing you to create an infinite amount of combinations and can never produce the same instrument twice. The library was created by Academy Award, TEC and G.A.N.G Award Winning Composer, Troels Folmann and a team of the best sound designers in the industry. Ambient Guitar.

The New Ambient Guitar VST library is a massive collection of carefully crafted sounds all derived from a number of different guitars. 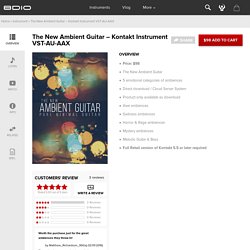 All source material is comprised of live guitar with various effects applied real-time and minimal post-production processing. Contrary to most guitar libraries the focus of The New Ambient Guitar VST is the unrecognizable, ambient side of the stringed instrument. Beyond the strums, palm-mutes, plucks, picks, squeals, pinch-harmonics and lightning fast, finger-bleeding leads typically played on guitars, there lies a dreamy, synthy, rarely heard realm of droning beauty in the guitar. Of course there is still room for plenty of range within this realm. You’ll find sounds from awe-inspiring beauty to fist-clenching rage, from the eerie unknown to somber loneliness, from pulse-pounding horror to gentle, soothing harmony. But what’s that you say? 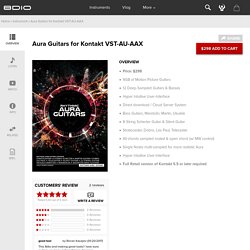 Aura Guitars contains 12 different guitars, including Martin, 12 String, Dobro, Mandolin, Ukulele, 8 String Schecter, Silent Guitar, Stratocaster, Telecaster, Les Paul and assortment of Bass Guitars. It contains both multi-sampled single notes and multi-sampled chords. All the chords were sampled in perfect fifth, so you can essentially generate any chord and rhythm you want. All 12 guitars were sampled symmetrically – meaning that you can freely blend anything you want and it will work together. So you literally have billion of patch combinations. Aura Guitars contains 3 modules, so you can freely mix and blend up to three different guitars together. Funk guitarist. If you've ever fantasised about playing guitar like Nile Rogers — and who hasn't — Scarbee's latest instrument could make all your dreams come true. 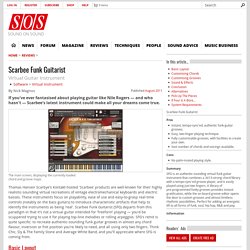 The main screen, displaying the currently loaded chord and groove maps. Thomas Hansen Scarbye's Kontakt‑hosted 'Scarbee' products are well‑known for their highly realistic‑sounding virtual recreations of vintage electromechanical keyboards and electric basses. These instruments focus on playability, ease of use and easy‑to‑grasp real‑time controls (notably on the bass guitars) to introduce characteristic artifacts that help to identify the instruments as being 'real'. Scarbee Funk Guitarist (SFG) departs from this paradigm in that it's not a virtual guitar intended for 'freeform' playing — you'd be scuppered trying to use it for playing top‑line melodies or rolling arpeggios.

AAS Strum Acoustic. Hammer-On. For Kontakt 5.3.1.37 + (ONLY WORKS IN DEMO MODE IN KONTAKT PLAYER) The Hammer-On technique is usually utilized to bridge notes together... or for killer solos. 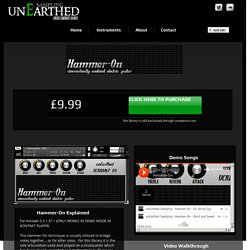 For this library it is the sole articulation used and played on a stratocaster which has been cleanly recorded and multisampled. There are no loops here (save for one temposynced patch), each patch contains multisamples. As this sort of play style is normally not showcased, this instrument has a very unique sound and timbre not found anywhere else. Consisting of 13 patches, Hammer-On can sound soft and sweet, creepy, or up tension in an action scene. Hammer-On is NOT your average guitar library. EWQL Fab Four. EastWest/Quantum Leap launch their new 64-bit 'Play' sample engine with two sound libraries spanning nearly 50 years of rock. 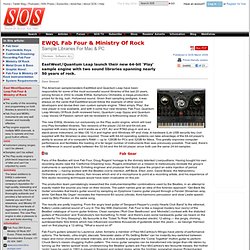 Dave Stewart The American samplemeisters EastWest and Quantum Leap have been responsible for some of the most successful sound libraries of the last 20 years, joining forces in 2002 to create EWQL Symphony Orchestra, a mega-production prized for its big, lush, Hollywood sound. Given their sampling pedigree, it was always on the cards that EastWest would follow the example of other sound developers and devise their own custom sample engine. Titled simply 'Play', the new player is now available, and with it come four new libraries: Fab Four, Quantum Leap Ministry Of Rock (both reviewed here), Quantum Leap Gypsy and Quantum Leap Voices Of Passion (which will be reviewed in a forthcoming issue of SOS).

The new EWQL libraries run exclusively on the Play audio engine, which will load only Play-formatted libraries. The results are pretty inspiring. Digital Redux™ - Guitar Legend.