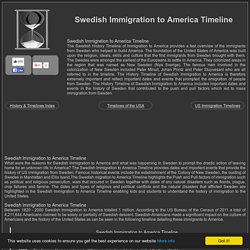 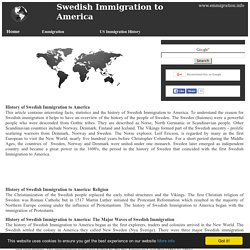 To understand the reason for Swedish immigration it helps to have an overview of the history of the people of Sweden. The Swedes (Suiones) were a powerful people who were descended from Gothic tribes. They are described as Norse, North Germanic or Scandinavian people. Other Scandinavian countries include Norway, Denmark, Finland and Iceland. The Vikings formed part of the Swedish ancestry - prolific seafaring warriors from Denmark, Norway and Sweden. Colonisation of North America 8-9 – WebEnglish.se. Related themes: Native Americans 7-9, Thanksgiving 3-7 and Pilgrim Fathers – Thanksgiving NB! 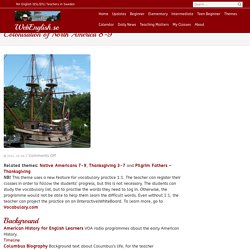 This theme uses a new feature for vocabulary practice 1:1. The teacher can register their classes in order to follow the students’ progress, but this is not necessary. The students can study the vocabulary list, but to practise the words they need to log in. Otherwise, the programme would not be able to help them learn the difficult words. Even without 1:1, the teacher can project the practice on an (Interactive)WhiteBoard. Background American History for English Learners VOA radio programmes about the early American History. 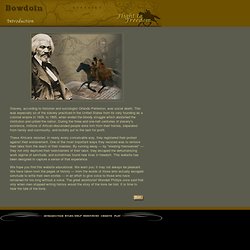 This was especially so of the slavery practiced in the United States from its very founding as a colonial empire in 1609, to 1865, when ended the bloody struggle which abolished the institution and united the nation. During the three and one-half centuries of slavery's existence, millions of African-descended people were torn from their homes, separated from family and community, and brutally put to the lash for profit. These Africans resisted. In nearly every conceivable way, they registered their protest against their enslavement. One of the most important ways they resisted was to remove their labor from the reach of their masters. We hope you find this website educational. Immigration: Stories of Yesterday and Today and Ellis Island. World War II and the Postwar Period The United States entered World War II in 1942. 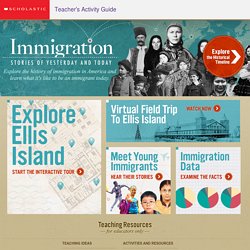