Models Project Sharp Rise in Deaths as States Reopen. As President Trump presses for states to reopen their economies, his administration is privately projecting a steady rise in the number of coronavirus cases and deaths over the next several weeks. 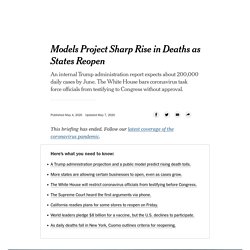 The daily death toll will reach about 3,000 on June 1, according to an internal document obtained by The New York Times, a 70 percent increase from the current number of about 1,750. The projections, based on government modeling pulled together by the Federal Emergency Management Agency, forecast about 200,000 new cases each day by the end of the month, up from about 25,000 cases a day currently. The numbers underscore a sobering reality: The United States has been hunkered down for the past seven weeks to try slowing the spread of the virus, but reopening the economy will make matters worse. As the administration privately predicted a sharp increase in deaths, a public model that has been frequently cited by the White House revised its own estimates, doubling its projected death toll.

Gov. Mr. Trump and the Coronavirus: A Sour President, Home Alone at the White House. WASHINGTON — President Trump arrives in the Oval Office these days as late as noon, when he is usually in a sour mood after his morning marathon of television. 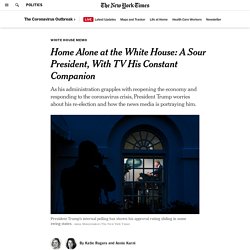 He has been up in the White House master bedroom as early as 5 a.m. watching Fox News, then CNN, with a dollop of MSNBC thrown in for rage viewing. He makes calls with the TV on in the background, his routine since he first arrived at the White House. But now there are differences. The president sees few allies no matter which channel he clicks. He is angry even with Fox, an old security blanket, for not portraying him as he would like to be seen. Confined to the White House, the president is isolated from the supporters, visitors, travel and golf that once entertained him, according to more than a dozen administration officials and close advisers who spoke about Mr. The economy — Mr. “He’s frustrated,” said Stephen Moore, an outside economic adviser to Mr. George Conway: Trump went ballistic at me on Twitter. Here’s why he reacts with such rage. Trump needs two electoral blocs to win. The pandemic is driving a wedge between them.

Trump suggests 'injection' of disinfectant to beat coronavirus and 'clean' the lungs. The 5-Minute Fix from The Washington Post. The presidential election will almost certainly center on the coronavirus and how it was handled. 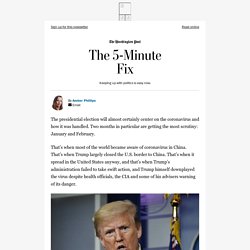 Two months in particular are getting the most scrutiny: January and February. That’s when most of the world became aware of coronavirus in China. That’s when Trump largely closed the U.S. border to China. That’s when it spread in the United States anyway, and that’s when Trump’s administration failed to take swift action, and Trump himself downplayed the virus despite health officials, the CIA and some of his advisers warning of its danger. Trump has defended himself by saying there were zero reported deaths in the United States through February. This debate about who did or said what during these two months is probably not going away. January: China shuts down Wuhan; Trump restricts travel from China. The 5-Minute Fix from The Washington Post. Trump says he doesn't plan to fire Fauci, coronavirus response leader. The President and the Plague: Tracking the Toll of Trump's Failure.

This story appears in the May 2020 issue of Rolling Stone, on newsstands May 5th. 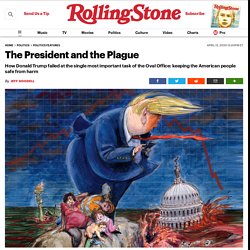 While Americans died of the modern plague, President Trump sang happy birthday to a fading Fox News personality. He Could Have Seen What Was Coming: Behind Trump’s Failure on the Virus. The shortcomings of Mr. 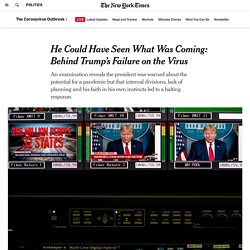 Trump’s performance have played out with remarkable transparency as part of his daily effort to dominate television screens and the national conversation. But dozens of interviews with current and former officials and a review of emails and other records revealed many previously unreported details and a fuller picture of the roots and extent of his halting response as the deadly virus spread: The National Security Council office responsible for tracking pandemics received intelligence reports in early January predicting the spread of the virus to the United States, and within weeks was raising options like keeping Americans home from work and shutting down cities the size of Chicago.

Mr. Trump would avoid such steps until March.Despite Mr. When Mr. Trump slams U.S. watchdog's report on shortages at coronavirus-hit hospitals. The timeline of Trump’s coronavirus response is increasingly damning. The worst president. Ever. The Coronavirus Test Is Too Hard for Trump. “We have it so well under control,” he continued, “I mean, we really have done a very good job.” 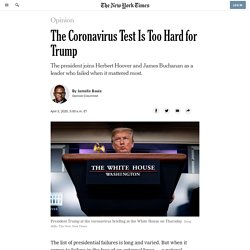 Now, of course, the message is quite different. The White House expects a six-figure death toll — 100,000 to 240,000 deaths, provided most Americans follow federal guidelines for social distancing. This, Trump says, would be a victory, since it could be much worse. “So you’re talking about 2.2 million deaths, 2.2 million people from this. And so if we could hold that down, as we’re saying, to 100,000. We should put this death toll in context. Trump is very likely, over the next several months, to preside over the deaths of at least a hundred thousand Americans in a crisis he chose to ignore until there was no choice but to act. It’s true that Trump imposed some travel restrictions on foreign nationals coming from China as the virus came into public view.

It was only after action from states, colleges and other institutions that the White House began to take this seriously. A White House report blows up Trump’s latest coronavirus defense. Trump’s quotes on covid-19 show how his response has changed over time - Washington Post. The President Is Trapped. YES AND NO. 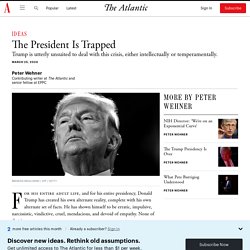 The thing to understand about Donald Trump is that putting others before self is not something he can do, even temporarily. His attempts to convey facts that don’t serve his perceived self-interest or to express empathy are forced, scripted, and always short-lived, since such reactions are alien to him. This president does not have the capacity to listen to, synthesize, and internalize information that does not immediately serve his greatest needs: praise, fealty, adoration. The 5-Minute Fix from The Washington Post. President Trump is increasingly making clear he wants to do what public health officials and a number of governors and mayors say is a bad idea: Let people go back to work and gather in large crowds in the next few weeks. 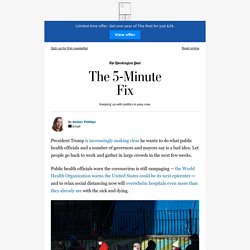 Public health officials warn the coronavirus is still rampaging — the World Health Organization warns the United States could be its next epicenter — and to relax social distancing now will overwhelm hospitals even more than they already are with the sick and dying. Trump says he’s worried the economic toll and its effects will be more devastating than that: “We can’t let the cure be worse than the disease.” Trump is the most powerful figure in the U.S. coronavirus response, and a large swath of the country supports him and will stand by him no matter what. And his voice certainly will play a role in how seriously all Americans treat social distancing, since it’s hard.

The 5-Minute Fix: Why Trump may not be able to force people to just go back to work - z3ptx.5ufgs - Gmail. Dan Patrick’s on-air plea captures an essential truth about Trump. How the Coronavirus Shattered Trump’s Serene Confidence  Early last week, the Trump era—which defined itself by a lurid celebration of “alternative facts,” a contempt for science, and an assault on global institutions and the “administrative state”—came to an end. 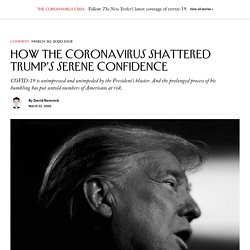 U.S. intelligence reports from January and February warned about a likely pandemic. How the Coronavirus Shattered Trump’s Serene Confidence  What does “Small Government” buy us? - Jim Hightower - Medium. This column is available for syndication through Creators.com. 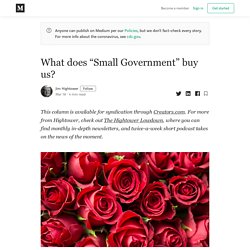 For more from Hightower, check out The Hightower Lowdown, where you can find monthly in-depth newsletters, and twice-a-week short podcast takes on the news of the moment. Suddenly, America is a nation of socialists, asking in dismay: “Where’s the government?” These are not born-again Bernie Sanders activists, but everyday people of all political stripes (including previously apolitical multitudes) who’re now clamoring for big government intervention in their lives.

Nothing like a spreading coronavirus pandemic to bring home the need that all of us have — both as individuals and as a society — for an adequately- funded, fully-functioning, competent government capable of serving all. Alas, as everyone can see in our present moment of critical national need, government today has been reduced to a rickety medicine show run by an inept, small-minded flimflammer peddling laissez-fairyland snake oil. A brutal new ad uses Trump’s own words against him.