Putin Did It Again: New Intelligence Report Says Moscow Helped Trump in 2020. Evan Vucci/AP Let our journalists help you make sense of the noise: Subscribe to the Mother Jones Daily newsletter and get a recap of news that matters. 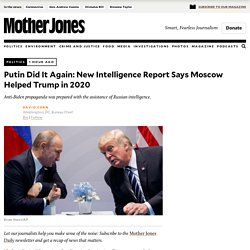 Vladimir Putin did it again. After directing Russian intelligence to attack the election to boost Donald Trump in 2016, the Russian leader launched another covert assault on American democracy to help Trump retain the White House in 2020. And he had help. Assorted Trump allies and conservative media outlets —including Rudy Giuliani, Fox News, and OAN—were useful idiots for Putin and his clandestine operators. Those are the damning conclusions of a report released Tuesday by the Office of the Director of National Intelligence. Aside from the main story of Putin’s return engagement, the report offers a broader study of foreign influence in the 2020 election, noting that Iran tried to use social media to undercut Trump and that China generally stayed out of the picture. Russia Worked to Boost Trump in 2020—With Help From Giuliani, Fox News, and OANN. Former Mayor Rudy Giuliani conducts a press conference at Republican National Committee headquarters on Thursday, November 19, 2020. 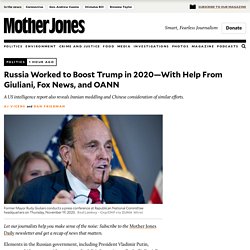 Rod Lamkey - Cnp/CNP via ZUMA Wire) Let our journalists help you make sense of the noise: Subscribe to the Mother Jones Daily newsletter and get a recap of news that matters. Elements in the Russian government, including President Vladimir Putin, oversaw a bid to use outside proxies to feed disinformation to Rudy Giuliani, Fox News, and the right-wing TV network OANN aimed at helping Donald Trump against Joe Biden during the 2020 campaign, a newly declassified US intelligence report reveals. MAGA March on Washington: Proud Boys, Antifa, Alex Jones, Gorka. A Pretty Convincing Win For Biden — And A Mediocre Performance For Down-Ballot Democrats. Even if you knew in advance about the “blue shift” that would occur in states like Pennsylvania — and we did know in advance about it! 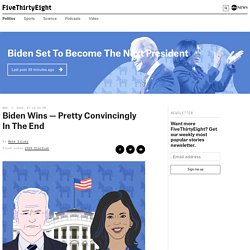 — it’s been hard to make enough of a mental adjustment for it this week. Numbers flashing across a TV ticker have a certain magnetic power and certitude to them. It was easy to forget that Joe Biden would gain ground once mail votes were added to the tallies because such votes were overwhelmingly Democratic this year in Pennsylvania and most other states. But just because of that blue shift — and the red shift that occurred in states where mail votes were counted first — that doesn’t mean the presidential race was all that close in the end. Joe Biden’s win was on the tighter side of the likely range of outcomes suggested by polls, but it was a thoroughly convincing one judged on its own merits.

So put aside your anxieties of the past few days and the premature media narratives that have been circulating since Tuesday night. ABC News owns FiveThirtyEight. How Trump Changed America  At 10:37 p.m. on Tuesday, November 8, 2016, I wrote myself an email: “Nate [Silver] and Micah [Cohen] just told me Clinton is probably going to lose, that she’s an underdog … collapse in the Midwest.” 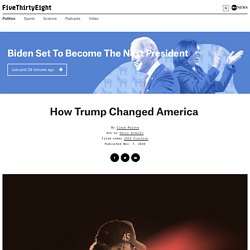 I’d been watching the 2016 vote returns in our office. At 9:35 p.m. Donald Trump’s chance of winning the election was 26 percent according to our model; by 10:09 p.m. it had moved to 44 percent. At 10:31 p.m. a blog post of mine went up about the radical shifts among voters without a college education in Michigan. The few minutes before and after I sent that email are caught in amber for me. But I have no doubt that the effects of Trump’s presidency will ripple through American life for years, if not decades. Trump changed politics. Yes, there were the rallies, the calls for swamp-draining, and all the broken political norms. Take the major political happenings of 2017, for instance. 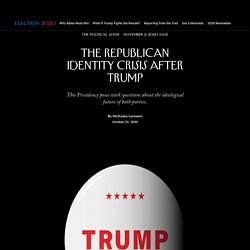 Years before he launched his Presidential campaign, some instinct led him to create an alliance with the religious wing of the Republican Party. Nearly twenty years ago, he formed a public relationship with Paula White, a popular televangelist who preaches the “prosperity Gospel,” and who has said that she guided Trump toward active Christianity. Since at least 2011, Trump has been appearing at the American Conservative Union’s annual Conservative Political Action Conference, a large gathering of activists from the Party base.

In 2016 and 2017, Trump released lists of potential Supreme Court Justices, all of them demonstrably acceptable to both wings of the Republican Party, the evangelicals and the libertarians, and then made appointments only from those lists. (He released a second-term list this year.) The Remnant strategy entails relentless attacks.