How to destroy angels welcome oblivion - Buscar con Google. Glitch art & databending. I know I’m pretty late on the bandwagon, but I’ve been seeing a lot of great glitch art lately and I think it’s my new obsession (thanks to the cyberpunk forums on Reddit). 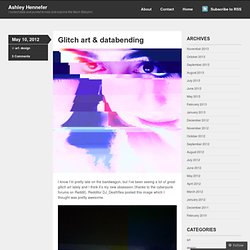 Redditor DJ_Deathflea posted this image which I thought was pretty awesome. I also liked this version of Vermeer’s Girl with a Pearl Earring (one of my favorite paintings ever). Designer Rob Sheridan did some amazing glitch art for the soundtrack of The Social Network. Check out more on his website. Glitch Tutorials. TUTORIAL: getting the vhs/tv effect in photoshop on mikeyjam's Blog - Buzznet. This tutorial requires basic knowledge of photoshop!!! Glitch Art Tutorial by ~Gloomy-Haruka on deviantART. Highpark. on Behance. Fredrik Ödman Photography - Home. Tumblaster on Behance. Bushnell HD Torch 165-Lumen Square Beam LED Flashlight: Sports & Outdoors. Bukvarius on Behance. Designspiration — __ Nonclickableitem. Xiaobaosg. There is strong shadow where there is much light - but does it float. Graphic Porn. December / February on Behance. 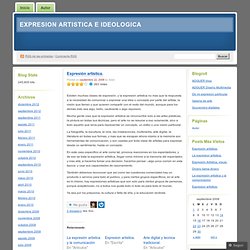 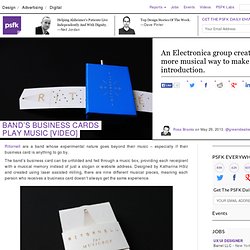 The band’s business card can be unfolded and fed through a music box, providing each receipient with a musical memory instead of just a slogan or website address. Designed by Katharina Hölz and created using laser assisted milling, there are nine different musical pieces, meaning each person who receives a business card doesn’t always get the same experience. The idea was inspired by the band’s live performances, in which they encourage the audience to bring along their own music box. Participants are then conducted by the duo onstage, incorporating the other pieces of music into their own. Travelers Transfer Virtual Food Between Outdoor Ads To End Hunger [Video] Most advertisements asking for donations are often in conflict with those asking you to buy something. 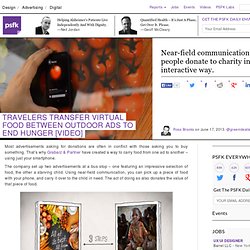 That’s why Grabarz & Partner have created a way to carry food from one ad to another – using just your smartphone. The company set up two advertisements at a bus stop – one featuring an impressive selection of food, the other a starving child. Using near-field communication, you can pick up a piece of food with your phone, and carry it over to the child in need.

The act of doing so also donates the value of that piece of food. People who make the effort to donate can share their accomplishment via Facebook, and will also receive a video from the child they helped saying thank you. Suicide Prevention Ad Turns Subway Riders Into Hotline Volunteers [Video] Confidential emotional support group Samaritans receive about a million calls a year and one out of five calls are suicide calls. 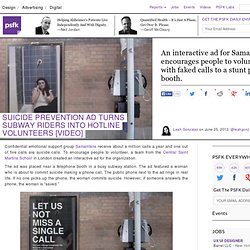 To encourage people to volunteer, a team from the Central Saint Martins School in London created an interactive ad for the organization. The ad was placed near a telephone booth in a busy subway station. The ad featured a woman who is about to commit suicide making a phone call. The public phone next to the ad rings in real life. If no one picks up the phone, the woman commits suicide. Heineken Asks How Creatives Would Sell Beer To Seniors. Retirees may have all the free time in the world, but entrants to the Heineken Ideas Brewery 60+ Design Challenge have just FIVE DAYS LEFT to submit their ideas to reinvent the beer-drinking experience for the 60-70 year old demographic. 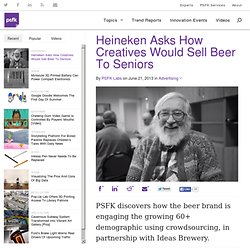 The 60+ demographic is increasing and according to a report by AT Kearney, the life expectancy of people in highly developed countries is increasing by one year, every five years. This growing demographic is largely neglected by major brands and Heineken is addressing this issue head on by setting up its Ideas Brewery, to gather ideas on how to cater for this generation of consumers. Heineken is calling for innovative new designs and campaigns for all aspects of the beer to their crowdsourcing platform, IdeasBrewery.com Entrants have until 27 June to submit their ideas.

Ideas Brewery. How To Create The Best Retail Experience [PSFK SEATTLE] At last month’s PSFK SEATTLE event, we invited some of the city’s innovative people to discuss their latest projects and reveal the inspiration that lead to their creation. 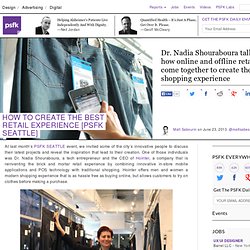 One of those individuals was Dr. iPad Backpack Helps Cyclists Communicate With Drivers. When it comes to cycling, there is nothing as important than the safety of the rider. 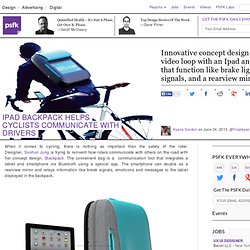 Designer, Soohun Jung is trying to reinvent how riders communicate with others on the road with her concept design, iBackpack. The convenient bag is a communication tool that integrates a tablet and smartphone via Bluetooth using a special app. The smartphone can double as a rearview mirror and relays information like break signals, emoticons and messages to the tablet displayed in the backpack. The built-in transparent window displays the screen of the tablet, signaling to everyone in view when a cyclist will turn right or left. 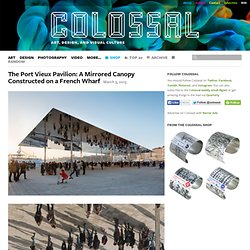 The Rubber Barber: Make a Mistake and Give Your Eraser a Fancy Haircut. Designed by Chen Lu Wei for Megawing this fun set of four erasers lets you assume the role of barber while you work, all you have to do first is make a mistake. 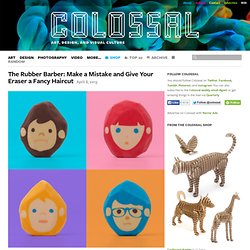 By using the eraser you slowly shave away the rubbery hair surface resulting in a funky new hairdo for your desktop pal, effectively turning an act of destruction into an act of creation every time you erase. Pretty sure my kid would just start with the face.