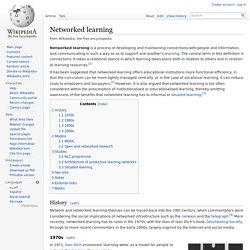 Google effects on memory: Cognitive consequences of having information at our fingertips - Journalist's Resource Journalist's Resource. As Internet search engines have become increasingly integrated into the way people locate, use and define information, concerns have been voiced over the impact this digital “crutch” may have on the lucidity and richness of human thought. 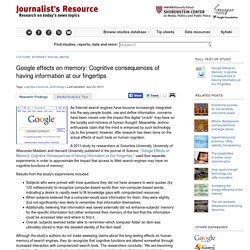 Meanwhile, techno-enthusiasts claim that the mind is enhanced by such technology. Up to the present, however, little research has been done on the actual effects of such tools on human cognition. A 2011 study by researchers at Columbia University, University of Wisconsin-Madison and Harvard University published in the journal of Science, “Google Effects on Memory: Cognitive Consequences of Having Information at Our Fingertips,” used four separate experiments in order to approximate the impact that access to Web search engines may have on cognitive functions of memory. Results from the study’s experiments included: Mills. Social Consequences of Internet Use. Psychological Impact of Internet Usage on Children. Internet Slang words - Internet Dictionary - InternetSlang.com. 20 Clean Ways to Earn Money Online Through Internet. You can indeed make decent income from Internet by doing computer-based jobs at home. 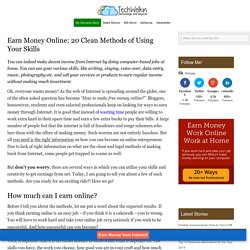 You can use your various skills, like writing, singing, voice-over, data-entry, music, photography etc. and sell your services or products to earn regular income without making much investment. Oh, everyone wants money! As the web of Internet is spreading around the globe, one of the often asked question has become “How to make free money online?”. Bloggers, housewives, students and even salaried professionals keep on looking for ways to earn money through Internet.

It is good that instead of wasting time people are willing to work extra hard in their spare time and earn a few extra bucks to pay their bills. But don’t you worry, there are several ways in which you can utilize your skills and creativity to get earnings from net. How much can I earn online? Before I tell you about the methods, let me put a word about the expected results. Well, it depends. 24 Easy Ways To Make Money On The Internet. So it turns out that the internet is good for more than just porn and video games – you can make money off it too! 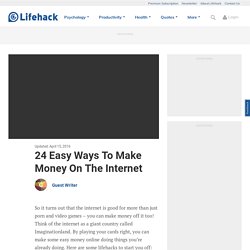 Think of the internet as a giant country called Imaginationland. By playing your cards right, you can make some easy money online doing things you’re already doing. Here are some lifehacks to start you off: 1. Website Building If the internet is a country, then websites are like real estates. Information Systems & Technology. With all activities that give us almost unlimited freedom, there are risks. 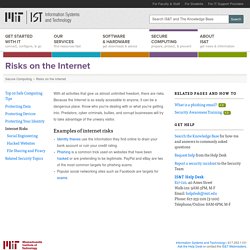 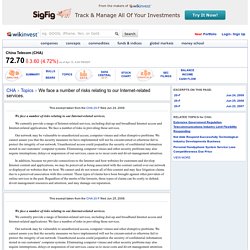 We currently provide a range of Internet-related services, including dial-up and broadband Internet access and Internet-related applications. We face a number of risks in providing these services. Our network may be vulnerable to unauthorized access, computer viruses and other disruptive problems. We cannot assure you that the security measures we have implemented will not be circumvented or otherwise fail to protect the integrity of our network. Unauthorized access could jeopardize the security of confidential information stored in our customers’ computer systems. Defining Cyberculture. Jakub Macek, Ph.D. 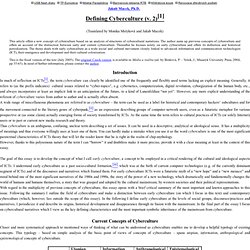 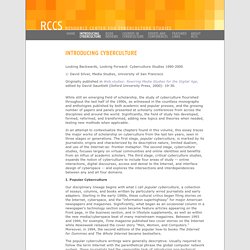 While still an emerging field of scholarship, the study of cyberculture flourished throughout the last half of the 1990s, as witnessed in the countless monographs and anthologies published by both academic and popular presses, and the growing number of papers and panels presented at scholarly conferences from across the disciplines and around the world. Cyberspying. There will be no cash payout for a New York anesthesiologist who sued her physician ex-husband because he accessed her e-mails for seven years as they separated, divorced and sparred... 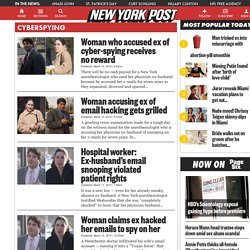 A grueling cross-examination made for a tough day on the witness stand for the anesthesiologist who is accusing her physician ex-husband of snooping on her e-mails for seven years. Cyberespionage: 'This Isn't a Problem That Can Be Solved' Cyberespionage Is a Top Priority for CIA's New Directorate. In the CIA’s mission of global influence and espionage, its hackers have just been elevated to a powerful new role. 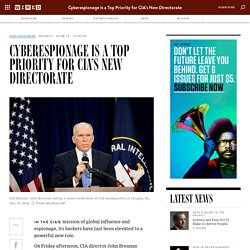 On Friday afternoon, CIA director John Brennan publicly issued a memo to the agency’s staff calling for a massive re-organization of its hierarchy and priorities. And center stage in the CIA’s new plans is a new Cyber Directorate that will treat “cyber”—in federal-speak, hackers and hacking—as a major new focus for both offense and defense.

“Digital technology holds great promise for mission excellence, while posing serious threats to the security of our operations and information, as well as to U.S. interests more broadly,” Brennan’s memo reads.