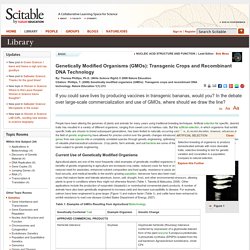 Can gene editing provide a solution to global hunger? According to the World Food Program, some 795 million people – one in nine people on earth – don’t have enough food to lead a healthy active life. 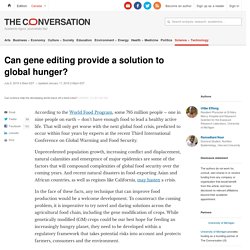 That will only get worse with the next global food crisis, predicted to occur within four years by experts at the recent Third International Conference on Global Warming and Food Security. Unprecedented population growth, increasing conflict and displacement, natural calamities and emergence of major epidemics are some of the factors that will compound complexities of global food security over the coming years.

And recent natural disasters in food-exporting Asian and African countries, as well as regions like California, may hasten a crisis. In the face of these facts, any technique that can improve food production would be a welcome development. To counteract the coming problem, it is imperative to try novel and daring solutions across the agricultural food chain, including the gene modification of crops. GM crops in the developing world. Genetic Engineering: Transcription, Translation, and Genetically Modified Organisms.

Engineered Probiotics as Living Medicine. Genetically Engineered Foods Should NOT Bear Special Labels. Nutriwatch Home Page A Publication of the Instutute of Food Technologists December 1999 Since life began, genes have crossed the boundaries of related and unrelated species in nature. 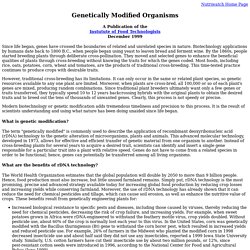 Biotechnology applications by humans date back to 1800 B.C., when people began using yeast to leaven bread and ferment wine. By the 1860s, people started breeding plants through deliberate cross-pollination. They moved and selected genes to enhance the beneficial qualities of plants through cross-breeding without knowing the traits for which the genes coded.

However, traditional cross-breeding has its limitations. Modern biotechnology or genetic modification adds tremendous timeliness and precision to this process. What is genetic modification? The term "genetically modified" is commonly used to describe the application of recombinant deoxyribonucleic acid (rDNA) technology to the genetic alteration of microorganisms, plants and animals. What are the benefits of rDNA technology? Dear Mark: Are Hybrid Fruits and Vegetables Healthy? Methods and Mechanisms for Genetic Manipulation of Plants, Animals, and Microorganisms - Safety of Genetically Engineered Foods - NCBI Bookshelf. FDA promotes GMO foods with a government-controlled campaign. (NaturalHealth365) A 2016 Pew Research Center study found that nearly 40 percent of Americans believe genetically modified organisms and GMO foods are worse for health than organic and conventional foods. 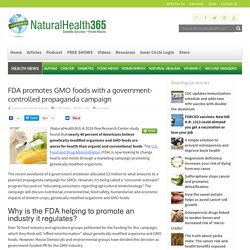 The U.S. Food and Drug Administration (FDA) is now looking to change hearts and minds through a marketing campaign promoting genetically modified organisms. The recent avoidance of a government shutdown allocated $3 million to what amounts to a planned propaganda campaign for GMOs. However, it’s being called a “consumer outreach” program focused on “educating consumers regarding agricultural biotechnology.” The campaign will discuss nutritional, environmental, food safety, humanitarian and economic impacts of biotech crops, genetically modified organisms and GMO foods. Why is the FDA helping to promote an industry it regulates?

Pamela Ronald: The case for engineering our food. Monsanto's Soybean Future? - Law and Biosciences Blog - Stanford Law School. Torresbioclan / LINDSEY BISSINGER GMO. GMOS: a chance worth taking One of the biggest advances in field of genetics has been genetic modification of organisms, known as GMOs. 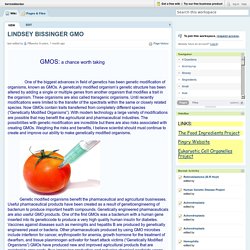 A genetically modified organism’s genetic structure has been altered by adding a single or multiple genes from another organism that modifies a trait in the organism. These organisms are also called transgenic organisms. Until recently modifications were limited to the transfer of the spectraits within the same or closely related species. Now GMOs contain traits transferred from completely different species (“Genetically Modified Organisms”). Genetic modified organisms benefit the pharmaceutical and agricultural businesses.

» Genetically Modified Microbes Biology Bytes. When thinking of genetically modified organisms (GMOs), plants and animals are probably the first to come to mind, which overlooks possibly the most important group of all: GM microorganisms, or microbes. 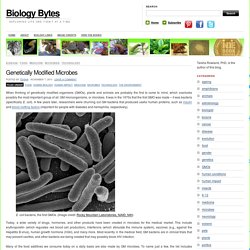 It was in the 1970s that the first GMO was made – it was bacteria (specifically E. coli). A few years later, researchers were churning out GM bacteria that produced useful human proteins, such as insulin and blood clotting factors (important for people with diabetes and hemophilia, respectively). Today, a wide variety of drugs, hormones, and other products have been created in microbes for the medical market. This include erythropoietin (which regulates red blood cell production), interferons (which stimulate the immune system), vaccines (e.g., against the Hepatitis B virus), human growth hormone (hGH), and many more. Since the 1980s, GM bacteria have even been purposefully released into the environment, after approval by the U.S. For further reading: Could GMO microbes provide new source of 'natural' vanilla?

How your food would look if not genetically modified over millennia? Genetically Modify Food. "Pharm" Animals & Plants (GMO Documentary)