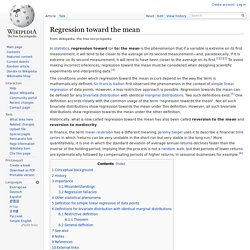 Sir Francis Galton first observed the phenomenon in the context of simple linear regression of data points. However, a less restrictive approach is possible. Regression towards the mean can be defined for any bivariate distribution with identical marginal distributions. Two such definitions exist.[5] One definition accords closely with the common usage of the term “regression towards the mean”. History[edit] Cluster Sampling. Confidence vs prediction intervals for regression. COMMON MISTEAKS MISTAKES IN USING STATISTICS: Spotting and Avoiding Them Introduction Types of Mistakes Suggestions Resources Table of Contents About For example, if the model assumption is that E(Y|X=x) = α +βx, then least squares regression will produce an equation of the form y = a +bx, where a is an estimate of the true value α and b is an estimate of the true value β. 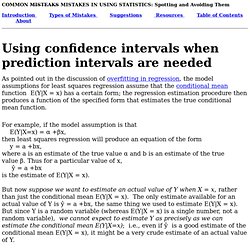 Thus for a particular value of x, Sample selection bias. Interpret Regression Coefficient Estimates - {level-level, log-level, level-log & log-log regression} - Curtis Kephart. Deterministic vs probabilistic. Errors and residuals in statistics. Introduction[edit] A statistical error (or disturbance) is the amount by which an observation differs from its expected value, the latter being based on the whole population from which the statistical unit was chosen randomly. 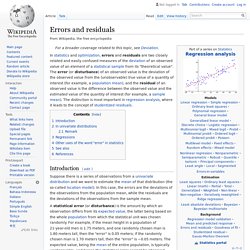 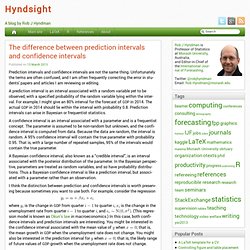 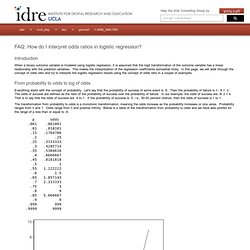 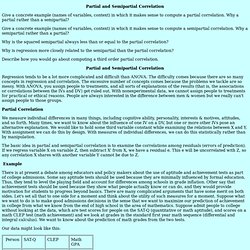 Why a partial rather than a semipartial? Give a concrete example (names of variables, context) in which it makes sense to compute a semipartial correlation. Econometrics Links. Econometric Links Econometrics Journal. Bertrand Russell’s Inductivist Turkey. A turkey, in an american nurture, decide to shape its vision of the world scientifically well founded (a wissenschaftliche Weltauffassung, according to the Logical Positivism by the Wiener Kreis). 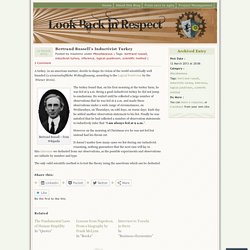 Bertrand Russell – from Wikipedia The turkey found that, on his first morning at the turkey farm, he was fed at 9 a.m. Being a good inductivist turkey he did not jump to conclusions. He waited until he collected a large number of observations that he was fed at 9 a.m. and made these observations under a wide range of circumstances, on Wednesdays, on Thursdays, on cold days, on warm days. Each day he added another observation statement to his list. However on the morning of Christmas eve he was not fed but instead had his throat cut. It doesn’t matter how many cases we list during our inductivist reasoning, nothing guarantees that the next case will lay in this inference we deducted from our observations, as the possible experiments and observations are infinite by number and type. 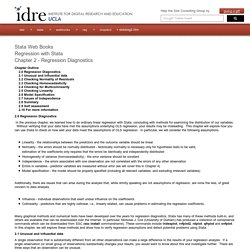 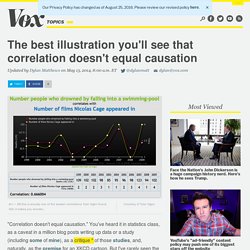 " You've heard it in statistics class, as a caveat in a million blog posts writing up data or a study (including some of mine), as a critique of those studies, and, naturally, as the premise for an XKCD cartoon. But I've rarely seen the point made as vividly as it was by Tyler Vigen, a law student at Harvard who, in his spare time, put together a website that finds very, very high correlations between things that are absolutely not related, like margarine consumption and the divorce rate in Maine: 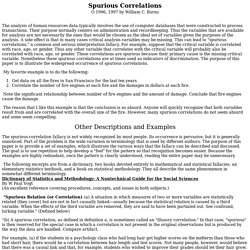 Burns The analysis of human resources data typically involves the use of computer databases that were constructed to process transactions. Their purpose normally centers on administration and recordkeeping.