We have two dachshunds named Frank and Carlos, which are just like our children. I work as a copy editor for a local company and my husband runs a local coffee house. Needless to say, I am very content with my life at this moment.

Greed is the Hardest Task Master — The Nahmias Cipher Report. Long ago there lived in Northern India a merchant whose wife had died and who went daily from his lonely house in the foothills to the town below, for buying and selling. 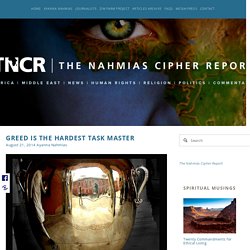 "I must have a holiday," he said to himself one day, and he began to climb up into the hills to enjoy the view and the sounds of the forest. In the hot afternoon, feeling sleepy he looked for a quiet place for a nap. Soon he discovered a kind of hole in a cliff, actually a cave; so he lay down in the dark interior and slept. Khalil Gibran — The Nahmias Cipher Report. 54th Tibetan Uprising Anniversary — The Nahmias Cipher Report. Alex Hamasaki, Student InternLast Modified: 11:50 a.m. 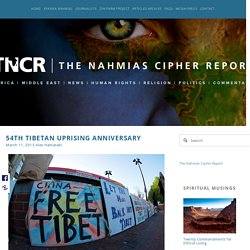 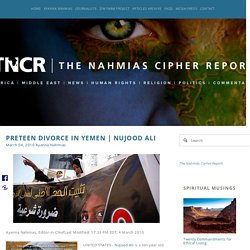 She recounts in her memoir her father promising her to this man and her mother's inability to protect her from the abuse she would soon suffer. Typical of many traditional, patriarchal societies, her father was the ultimate arbiter of all decisions pertaining to the females of his household. Mohammed al-Zawahiri arrested in Egypt — The Nahmias Cipher Report. Ty Butler, Senior CorrespondentInternational Development and Conflict Last Modified: 02:30 a.m. 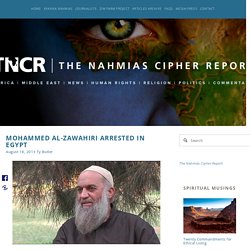 DST, 19 August 2013 GIZA, Egypt - The brother of Al Qaeda Central’s leader Ayman al-Zawahiri has been arrested in Egypt. Mohammed al-Zawahiri was detained at a checkpoint in Giza during a military crackdown on Islamists supposedly supporting ousted President Mohamed Morsi which has seen over 1000 arrested so far. This is not the first time that Mohammed al-Zawahiri has been arrested. He was sentenced to death in Egypt in absentia in the 90’s for his alleged role in the assassination of Anwar Sadat and was detained in Dubai before being transferred to the Egypt. Happiness in Corporate America — The Nahmias Cipher Report. Michael Ransom, Contributor EditorLast Modified: 02:59 a.m. 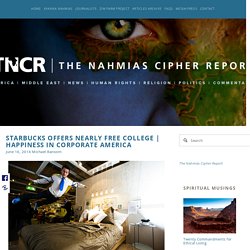 DST, 17 June 2014 SEATTLE, Washington -- Coffee powerhouse Starbucks is setting a new bar for employee benefits. Yesterday, 16 June 2014, Starbucks announced that they will partner with Arizona State University online to provide four-year bachelor's degrees to employees for only $13,500. According to CEO Howard Schultz, the initiative will allow baristas to continue their studies while attracting high-caliber employees. Students will pick their own major, and class schedules are flexible. ISIS, Al Qaeda, Houthi Rebels Compete in Yemen — The Nahmias Cipher Report. YEMEN - ISIS has infiltrated Yemen, a country already flooded with terrorist groups. 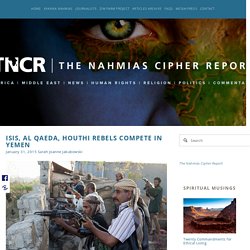 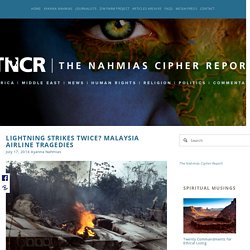 DST, 17 July 2014 DONETSK, Ukraine -- First, we preface this article with our sympathies for the families and friends of the 295 people who died when a Malaysian Airliner was shot down over eastern Ukraine earlier today. It is a horrific tragedy, in a world which has become increasingly violent, whether by design or happenstance, and for which there is no explanation. The tragedy of Flight MH17 could also be considered a "smoking gun" for a conspiracy theorist. NASA's Lunar Orbiter Scheduled for Crash-Landing — The Nahmias Cipher Report.

Around Easter, NASA's lunar orbiter is scheduled to complete its eight-month-long mission and crash on the moon. 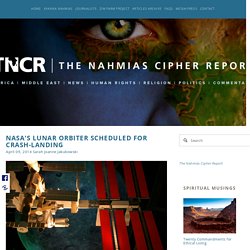 LADEE (Lunar Atmosphere and Dust Environment Explorer) finished both of its objectives -- to gather information on the moon's atmosphere and to shed light on the lunar glow seen in Apollo pictures -- in March. Since then, it's been doing a few victory laps to gather some bonus data. Stacie Halas, Beyoncé, Separate and Unequal — The Nahmias Cipher Report. Ayanna Nahmias, Editor-in-ChiefLast Modified: 12:32 p.m. 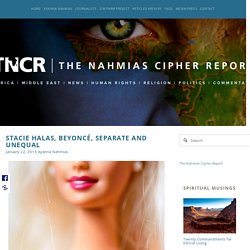 EDT, 23 January 2013 OXNARD, California - This past year has been tough on women, especially for those who have taken a brave and public stand like Malalai Yousafzai, a young Pakistani teenager who recently survived an assassination attempt and continues to live under a death threat simply because she advocated for education for girls in her country. In the United States, a country with far more progressive women’s rights legislation than some nations, women are still subject to unequal treatment, physical abuse, and verbal castigation as in the case of Sandra Fluke. In 29 February 2012, Fluke was called a “slut” and a “prostitute” by a conservative talk-show host Rush Limbaugh in response to the Georgetown University Law Center student’s speech the previous week to House Democrats in support of mandating insurance coverage for contraceptives. 1 2 Next Page » Mugabe, A Comparison of Current African Elections — The Nahmias Cipher Report.

DST, 21 August 2013 HARARE, Zimbabwe - Despite optimistic reviews and marks of approval from neighboring countries and multilateral institutions, democratic elections in modern day Africa still leave a lot left to be desired in several categories. A prime example of this can be seen with the current post-election situation in Zimbabwe. President Robert Mugabe, who is 89 years old and has been the head of state since 1987, just received another electoral "win" after the country's elections that took place on July 31st. International watchdogs held their breath as the voting process and results took place as the last Zimbabwean national election in 2008 ended in violence as opponent Morgan Tsvangirai's supporters were attacked.