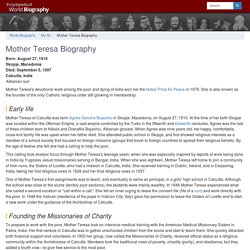 She is also known as the founder of the only Catholic religious order still growing in membership. Early life Mother Teresa of Calcutta was born Agnes Gonxha Bojaxhiu in Skopje, Macedonia, on August 27, 1910. At the time of her birth Skopje was located within the Ottoman Empire, a vast empire controlled by the Turks in the fifteenth and sixteenth centuries. This calling took sharper focus through Mother Teresa's teenage years, when she was especially inspired by reports of work being done in India by Yugoslav Jesuit missionaries serving in Bengal, India. One of Mother Teresa's first assignments was to teach, and eventually to serve as principal, in a girls' high school in Calcutta. Founding the Missionaries of Charity Dedication to the very poor Mother Teresa. AP/Wide World Photos. 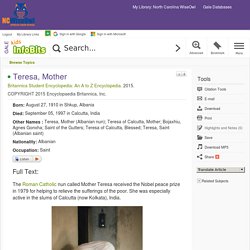 She was especially active in the slums of Calcutta (now Kolkata), India. She was born on August 27, 1910, in Skopje, Macedonia. Her birth name was Agnes Gonxha Bojaxhiu. In 1928 she joined a community of nuns in Ireland called the Sisters of Loretto. Kids InfoBits - Document - Teresa, Mother. Mother Teresa was among the most well-known and highly respected women in the world in the latter half of the twentieth century. 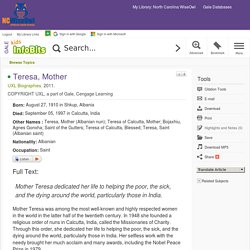 In 1948 she founded a religious order of nuns in Calcutta, India, called the Missionaries of Charity. Through this order, she dedicated her life to helping the poor, the sick, and the dying around the world, particularly those in India. Her selfless work with the needy brought her much acclaim and many awards, including the Nobel Peace Prize in 1979. Britannica School. Mother Teresa - History for Kids. Mother Teresa The woman known as Mother Teresa was born in 1910 in what is now known as the Republic of Macedonia. 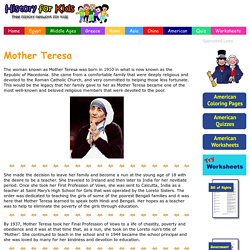 She came from a comfortable family that were deeply religious and devoted to the Roman Catholic Church, and very committed to helping those less fortunate. This would be the legacy that her family gave to her as Mother Teresa became one of the most well-known and beloved religious members that were devoted to the poor. She made the decision to leave her family and become a nun at the young age of 18 with the desire to be a teacher. She traveled to Ireland and then later to India for her novitiate period. Kid's Biography: Mother Teresa. Biography Mother Teresaby Unknown Occupation: Catholic Nun Born: August 26, 1910 in Uskub, Ottoman Empire Died: September 5, 1997 in Calcutta, India Best known for: Fighting for the rights of the sick and helplessBiography: 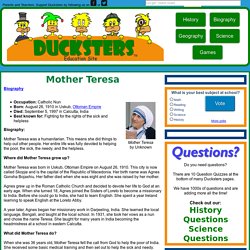 Biography Mother Teresa -Biography Online. Mother Teresa (1910–1997) was a Roman Catholic nun who devoted her life to serving the poor and destitute around the world. 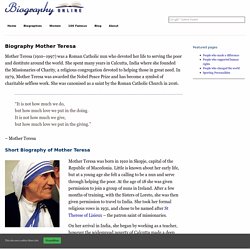 She spent many years in Calcutta, India where she founded the Missionaries of Charity, a religious congregation devoted to helping those in great need. In 1979, Mother Teresa was awarded the Nobel Peace Prize and has become a symbol of charitable selfless work. She was canonised as a saint by the Roman Catholic Church in 2016. “It is not how much we do, but how much love we put in the doing.

It is not how much we give, but how much love we put in the giving.” – Mother Teresa Short Biography of Mother Teresa Mother Teresa was born in 1910 in Skopje, capital of the Republic of Macedonia. On her arrival in India, she began by working as a teacher, however the widespread poverty of Calcutta made a deep impression on her and this led to her starting a new order called “The Missionaries of Charity”.

“Whatever you do to the least of my brethren, you do it to me.”