Do You Know Which Of These Snacks Are Healthy Enough For School Vending Machines? Schools Brace for Launch of Federal Snack Rules. Published Online: June 11, 2014 Published in Print: June 11, 2014, as Schools Brace for Start Of 'Smart Snack' Rules Federal nutrition rules set to go into effect July 1 would force enticing items like cheesy pizza off the à la carte line at Township High School District 214 in Arlington Heights, Ill. 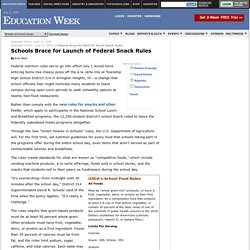 —a change that school officials fear might motivate many students to leave campus during open lunch periods to seek unhealthy options at nearby fast-food restaurants. Rather than comply with the new rules for snacks and other foods, which apply to participants in the National School Lunch and Breakfast programs, the 12,250-student district's school board voted to leave the federally subsidized meals programs altogether. Through the new "Smart Snacks in Schools" rules, the U.S. All Foods Limits Per Serving Calories.

Are Kids Going to Eat Less Junk at School?  The days of snacking on candy, soda and chips in schools may soon be over. 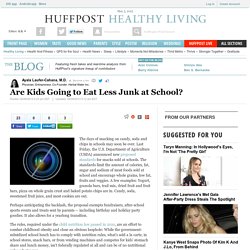 Last Friday, the U.S. Department of Agriculture (USDA) announced new proposed standards for snacks sold at schools. Healthy School Food: In Nearly All States, Fewer Than Half Of High Schools Sold Fruits Or Vegetables As Snacks In 2010, Report Says. While the new nutritional guidelines imposed by the USDA this fall require a wider selection of fruits and vegetables in school meals, the same cannot be said of snacks sold in school stores, snack bars or vending machines. 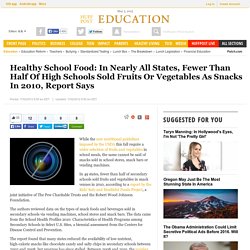 In 49 states, fewer than half of secondary schools sold fruits and vegetables in snack venues in 2010, according to a report by the Kids’ Safe and Healthful Foods Project, a joint initiative of The Pew Charitable Trusts and the Robert Wood Johnson Foundation. The authors reviewed data on the types of snack foods and beverages sold in secondary schools via vending machines, school stores and snack bars. The data came from the School Health Profiles 2010: Characteristics of Health Programs among Secondary Schools in Select U.S. Sites, a biennial assessment from the Centers for Disease Control and Prevention. 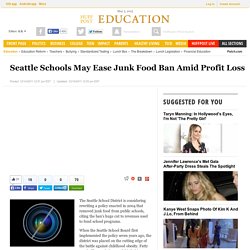 When the Seattle School Board first implemented the policy seven years ago, the district was placed on the cutting edge of the battle against childhood obesity. Fatty snacks like candy bars and fried chips were stripped from vending machines and replaced with orange juice, water and granola bars. But the change has reduced vending machine profits across the district to $17,000 this year, from $214,000 before the ban was adopted, The Seattle Times reports. The money went toward funding student clubs, publications, athletic uniforms and social events -- some of which had to be canceled or cost students more out of pocket to hold or keep. The ban also hasn't kept some students from eating unhealthily, as some students simply go off campus to find their treats.

"The question is did we go too far? " School Vending Machines, Weight Gain Link Disputed By New Study. The explosion of obesity and unhealthy eating among children in recent years is deadly serious. 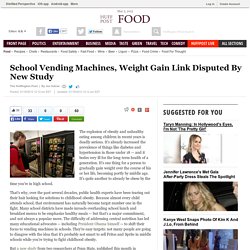 It's already increased the prevalence of things like diabetes and hypertension in those under 18 -- and it bodes very ill for the long-term health of a generation. It's one thing for a person to gradually gain weight over the course of his or her life, becoming portly by middle age. It's quite another to already be obese by the time you're in high school. That's why, over the past several decades, public health experts have been tearing out their hair looking for solutions to childhood obesity. 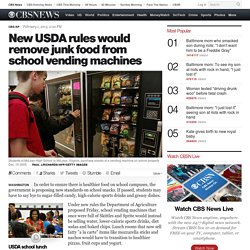 PAUL J.RICHARDS/AFP/Getty Images WASHINGTON In order to ensure there is healthier food on school campuses, the government is proposing new standards on school snacks. If passed, students may have to say bye to sugar-filled candy, high-calorie sports drinks and greasy dishes. School vending machine laws would help kids lose weight, study shows. (CBS/AP) Snacks sold in vending machines at schools may soon be getting healthier under the government's ongoing plan to raise a healthier generation. 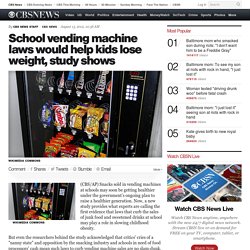 Now, a new study provides what experts are calling the first evidence that laws that curb the sales of junk food and sweetened drinks at school may play a role in slowing childhood obesity. But even the researchers behind the study acknowledged that critics' cries of a "nanny state" and opposition by the snacking industry and schools in need of food processors' cash mean such laws to curb vending machine sales are no slam-dunk. But if the laws have even a tiny effect, "What are the downsides of improving the food environment for children today? " asked Dr. David Ludwig, an obesity specialist at Harvard Medical School and Boston Children's Hospital.

The effects weren't huge, and the study isn't proof that the laws influenced kids' weight. "This is the first real evidence that the laws are likely to have an impact," said Dr. School cafeterias, vending machines trading sugar, fat for more healthful fare. Any parent who has fixed a nutritious school lunch only to find it untouched in a backpack the next morning will be heartened by new federal rules that will take effect in schools nationwide in the fall of 2014. ¶ That’s when laws will require school vending machines, stores and “a la carte” lunch menus to provide only healthful foods. ¶ So if a child hits the cafeteria line for pizza, the cheese on that slice will be relatively low in fat and sodium and the crust probably will be made from whole grains. 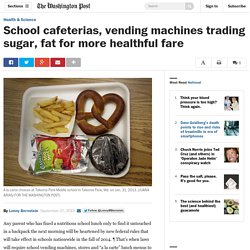 And snackers will find nuts, granola bars and water in vending machines instead of candy bars, potato chips and sugary sodas. ¶ A 2001 report by the U.S. Department of Agriculture showed that children in the school breakfast program, many of whom eat school-provided lunches, consume as much as half their calories each day at school.

A 2009 study showed that sugar-sweetened beverages add 112 calories to the average elementary school student’s daily diet. Source: USDA. Tools for Schools: Focusing on Smart Snacks. Vending machine company promotes healthy eating. It all started with a simple desire to do something good. 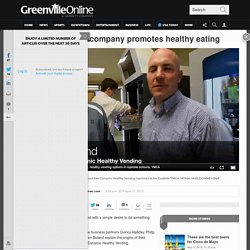 That's how business partners Quincy Halliday, Philip Nix and Ben Boland explain the origins of their business Dynamic Healthy Vending. The company provides healthy vending machines to schools, businesses and health clubs. And if the company founders have anything to do with it, it will help spur a healthier snacking landscape throughout the Upstate. Oh, and all three company founders are engineering this healthy eating revolution on the side. All three have day jobs. "One of the main focuses of starting this was to get involved with the community," says Halliday. "We all have families and we're all going to grow roots in the Upstate. New federal rules require healthier school snacks. Candy bars, doughnuts and regular potato chips will become scarce in schools under new federal rules released Thursday, replaced by healthier options such as granola bars, trail mix and baked chips. 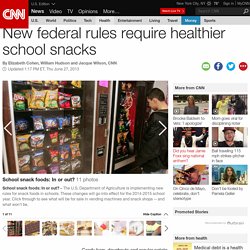 The U.S. Department of Agriculture's new "Smart Snacks in School" nutrition standards represent the first nutritional overhaul of school snacks in more than 30 years. The regulations set limits for fat, salt and sugar sold in places such as vending machines and snack bars. School foods must contain at least 50% whole grains or have a fruit, vegetable, dairy or protein as the first ingredient. Foods that contain at least ¼ cup of fruit and/or vegetables will also be allowed. Beverages will be under the microscope as well. Schools and food and beverage companies must meet these standards by July 1, 2014, according to the USDA.

"Snacks now have to be nutritious. Removing school vending machines is not enough to cut soda consumption. Banning vending machines from schools can actually increase soda and fast food consumption among students if it’s the only school food policy change implemented, according to research conducted at the University of Illinois at Chicago.

The study, published online in the journal PLOS ONE, looked exclusively at regular soda consumption – not diet soda or other sugar sweetened beverages – and fast food. The authors are analyzing other sugar sweetened beverages in an independent, ongoing study. The researchers wanted to find out if having vending machines in schools affected daily intake of soda and eating unhealthy fast foods outside of school when combined with other factors such as state tax rates and soda bans in schools. Vending Machine Bans In Schools Encourage Kids To Find Fast Food Elsewhere; Changing Diets Requires Large-Scale Change. Last year, 44 percent of school districts banned junk food from vending machines, believing that by eliminating unhealthy foods, they'd encourage kids to eat better.

But a new study finds that banning vending machines in schools might not end up curbing childhood obesity after all — it may actually worsen it. Instead of promoting healthy eating, researchers say that it could cause an increased consumption of fast food. The researchers, from the University of Illinois, found that solely banning vending machines without taking any subsequent measures may not help students make healthier food choices. If the schools don’t have the snacks or sodas, students will find another way to purchase their favorite items. School Vending-Machine Bans May Not Boost Kids' Nutrition: Study. Comprehensive school policies are needed, researchers say WebMD News from HealthDay By Robert Preidt HealthDay Reporter FRIDAY, Aug. 8, 2014 (HealthDay News) -- Banning vending machines from schools without making other food policy changes can actually lead to greater consumption of fast food and soda, according to a new U.S. study.

If kids still have access to high-fat, high-calorie foods and beverages from other sources, restricting vending-machine fare won't have much effect, the University of Illinois at Chicago researchers explained.