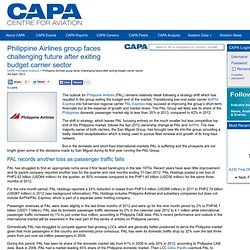 Transitioning low-cost sister carrier AirPhil Express into full-service regional carrier PAL Express may succeed at improving the group’s short-term financials but at the expense of growth and market share. The PAL Group will likely see its share of the Philippines domestic passenger market slip to less than 35% in 2013, compared to 42% in 2012. The shift in strategy, which leaves PAL focusing entirely on the much smaller but less competitive top end of the Philippine market, follows the Apr-2012 ownership change at PAL and AirPhil.

The new majority owner of both carriers, the San Miguel Group, has brought new life into the group, providing a badly needed recapitalisation which is being used to pursue fleet renewal and growth of its long-haul network. Korea’s Jeju Air signals it must change from hybrid to pure LCC model as it seeks partnerships. Change may finally be coming to South Korea’s low-cost carrier scene. 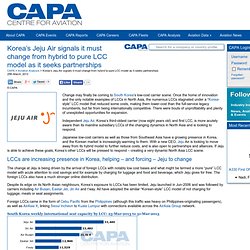 Once the home of innovation and the only notable examples of LCCs in North Asia, the numerous LCCs stagnated under a “Korea-style” LCC model that reduced some costs, making them lower-cost than the full-service legacy incumbents, but far from being internationally competitive. There were bouts of unprofitability and plenty of unexploited opportunities for expansion. Citilink handles 3.8 million passengers in 2012; eyes 100 new routes in 2013. Agus Irianto, Citilink’s VP Sales and Distribution, recently signed a multimillion dollar order with Airbus and is open about the airline’s expansion plans: “We are going to be much more aggressive in terms of route development in 2013 and plan 100 new routes”. 25 A320neos will help the airline grow even more in the future. 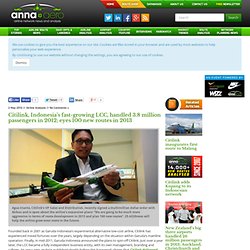 Founded back in 2001 as Garuda Indonesia’s experimental alternative low-cost airline, Citilink has experienced mixed fortunes over the years, largely depending on the situation within Garuda’s mainline operation. Finally, in mid-2011, Garuda Indonesia announced the plans to spin-off Citilink. Just over a year later, the LCC became a fully independent business entity, with its own management, branding and callsign.

An anna.aero analysis published shortly before this happened, shows that Citilink delivered much of its growth potential in the first half of 2012. Air Busan. Air Busan Co., Ltd., operating as Air Busan (Hangul: 에어부산; RR: E-eo Busan) is a regional airline based in Busanjin-gu, Busan, Republic of Korea.[1] It is a subsidiary of Asiana Airlines. 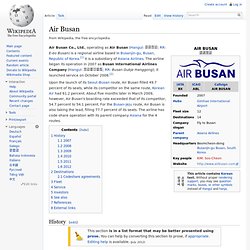 The airline began its operation in 2007 as Busan International Airlines Company (Hangul: 부산국제항공; RR: Busan Gukje Hanggong); it launched service on October 2008.[2] Upon the launch of its Seoul–Busan route, Air Busan filled 49.7 percent of its seats, while its competitor on the same route, Korean Air had 61.2 percent. About five months later in March 2009, however, Air Busan's boarding rate exceeded that of its competitor, 54.7 percent to 54.1 percent. For the Busan-Jeju route, Air Busan is also taking the lead, filling 77.7 percent of its seats. Jetstar Group concentrates on its Singapore hub as Jetstar Asia increases focus on Southeast Asia. This is the third report in a three-part series on Jetstar’s Singapore-based operations, which includes Jetstar Asia, Jetstar Airways and Valuair. 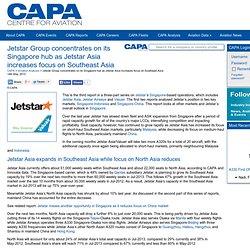 The first two reports analysed Jetstar’s position in two key markets, Singapore-Indonesia and Singapore-China. This report looks at other markets and Jetstar’s overall outlook in Singapore. Over the last year Jetstar has slowed down fleet and ASK expansion from Singapore after a period of rapid capacity growth for all of the country’s major LCCs, intensifying competition and impacting profitability. Seat capacity, however, has continued to grow rapidly as Jetstar Asia has increased its focus on short-haul Southeast Asian markets, particularly Malaysia, while decreasing its focus on medium-haul flights to North Asia, particularly mainland China. Belgium’s Jetairfly targets further growth with new E-Jets and a Boeing 787. In a recent results presentation, TUI Travel Plc described Jetairfly as its “lowest cost” airline, but complimentary words often come with strings attached and the Brussels-based airline was awarded with the challenging task to turn the group’s loss making Moroccan low-cost subsidiary, Jet4You, around and to consolidate the struggling airline into its profitable Belgian business. 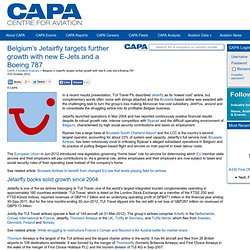 Jetairfly launched operations in Mar-2004 and has reported continuously positive financial results despite its robust growth rate, intense competition with Ryanair and the difficult operating environment of Belgium, characterised by high social security contributions and taxes on employment. Ryanair has a large base at Brussels South Charleroi Airport and the LCC is the country’s second largest operator, accounting for about 23% of system seat capacity. Air Do, product of Japan’s quixotic airline market, likely to remain independent pending reform. Air Do, based in the Hokkaido region in Japan, is an unusual type of carrier and perhaps one that could only exist in Japan’s atypical domestic environment.

It enjoys a strikingly synergistic relationship with All Nippon Airways and leverages a valuable position at slot-constrained Haneda. Air Do has challenges: Its traffic is highly seasonal, relying on passengers to flee the scorching summer for Hokkaido’s cooler weather. Mango (airline) Mango Airlines SOC Ltd, known as Mango, is a state-owned South African low-cost airline, founded in 2006 as a subsidiary of South African Airways, that operates domestic scheduled budget services. 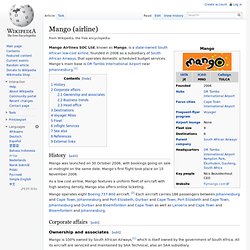 Mango's main base is OR Tambo International Airport near Johannesburg.[1] Mango was launched on 30 October 2006, with bookings going on sale at midnight on the same date. Firefly Aims 2 Million Passengers This Year. Community airline Firefly aims to increase passenger loads to two million this year from 1.6 million last year. 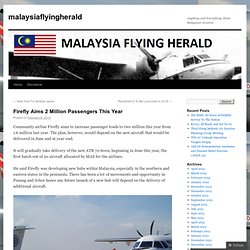 The plan, however, would depend on the new aircraft that would be delivered in June and at year-end. It will gradually take delivery of the new ATR 72-600s, beginning in June this year, the first batch out of 20 aircraft allocated by MAS for the airlines. He said Firefly was developing new hubs within Malaysia, especially in the southern and eastern states in the peninsula. There has been a lot of movements and opportunity in Penang and Johor hence any future launch of a new hub will depend on the delivery of additional aircraft. Firefly would increase its 28 weekly flights between Subang and Senai, Johor to 38 starting from this coming February 19. 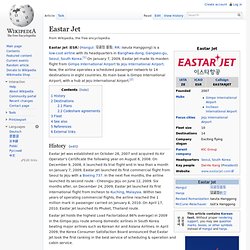 Last month it neared a resolution to negotiations to acquire eight ATR 72-600s, reflecting expectations for rejuvenation of a business that has fought valiantly to escape the ravages of the Irish economic collapse. The airline, which flies as Aer Lingus Regional (under 2010 franchise arrangements with the eponymous national carrier), authorized ATR to reveal plans at July’s Farnborough International airshow to deliver the first new turboprop next year. “We are reviewing our requirement regarding potential purchase or leasing of [several] new aircraft,” Aer Arann CFO Fiachra Kirwan told AIN in early August.

“The deal is imminent and we are looking forward to announcing the details in the near future,” said Kirwan. Domestic aviation recovery fuels competition. VietNamNet Bridge – The domestic aviation market has significantly recovered, and growth in passenger transport is up 21 per cent. It has opened up serious competition between national carrier Vietnam Airlines, and low fare airlines such as Vietjet Air. Despite the strong competition among airlines and limited infrastructure for airports, Vietnam Airlines has reached its profit targets. Turnover reached 98 per cent with over VND54 trillion (US$2.5 billion) but their profits increased 162 per cent, from their earlier target of VND98 billion ($4.7 million) to VND140 billion ($6.6 million) at the end of the year.

The airline transported 14.7 million passengers, of which nearly 8.8 million were local, an increase of 17 per cent on their original targets. The percentage of domestic seat usage reached over 81 per cent and demonstrated that Vietnam Airlines has emerged unscathed from three sluggish years. In 2013, the local aviation market made a swift recovery. Japan's StarFlyer looks to expand its successful niche – but change is afoot. Japanese aviation is dominated by All Nippon Airways and Japan Airlines, who account for nearly 75% of capacity in the world's fourth largest domestic market.

A number of carriers divide the rest, and while they may be small, they are looking to grow domestically, branch out internationally and be innovative to set themselves apart from the ANA and JAL behemoths. StarFlyer is one of those carriers, and has had profits to support its strategic positioning. It is now slightly accelerating aircraft deliveries to grow domestically – it was the second-largest recipient of newly released slots at prized Haneda airport – and is looking cautiously at the international market. Colombia's aviation market poised for more rapid growth in 2013, led by VivaColombia, Avianca & LAN.

Colombia recorded 15% growth in domestic passenger traffic in 2012 and should see more double-digit growth in 2013 driven partially by expansion at low-cost start-up VivaColombia. The Colombian international market also grew by 13% in 2012 and should see more rapid growth in 2013 driven partially by expansion at LAN Colombia. Colombia’s strong economy and growing middle class population provide favourable market conditions. Scoot outlook improves as Singapore Airlines long-haul LCC subsidiary prepares for 375-seat 787-9. Thailand’s budget airlines: A quick guide. WITH new budget airlines opening up routes across Thailand, there are now even fewer places you have to endure the bumpy long bus journeys of old. The ease of access also means destinations across northern Thailand are opening up like never before. InterSky: Craving the niche in the Lake Constance area - anna.aero.

In late November, InterSky announced major expansion in Graz, Austria’s second-largest city. Renate Moser, co-owner of the airline, commented: “Graz airport gives us some good opportunities such as the already announced Zürich and Milan; furthermore, we offer our customers a daily flight to Friedrichshafen with the new schedule. Further route announcements are subject to the performance.” Showcasing the celebratory cake in Graz were Wolfgang Malik, Chairman of the Holding Graz; Georg Bliem, Steiermark Tourismus’ MD; Renate Moser, Founder & MD, InterSky; Peter Oncken, Managing Partner, InterSky; and Gerhard Widmann, Graz Airport’s CEO. Cambodia poised for more double-digit growth as Cambodia Angkor Air expands and Qatar Airways enters. The Cambodian market is poised for more rapid growth in 2013 after quietly expanding by 18% in 2012, making it one of the fastest growing markets in Asia.

Flag carrier Cambodia Angkor Air is pursuing significant expansion albeit from a very small base while international carriers are also continuing to add services in the Cambodian market. The Mar-2013 suspension of service from Air France, which became in 2011 the first European carrier to serve Cambodia in decades, is a blow for the country’s emerging economy and tourism industry. But the loss of Air France is being offset by the addition of Qatar Airways, which will become in Feb-2013 the first Gulf carrier to serve Cambodia. WOW air. Www.tigerair.com/news/OS_20130111_Tiger_Airways_Operating_Statistics_Dec_2012.pdf. Colombia’s robust domestic growth continues unabated as subtle shifts occur in the market place. Growth in Colombia’s domestic market continued full steam ahead during the first five months of 2013 as the country's passenger growth jumped 21% to roughly 8.5 million. This follows already strong 15% growth in domestic traffic during 2012, when the country's airlines transported close to 19 million domestic passengers.

The expansion reflects Colombia’s stature as one of the fastest growing domestic markets in the world, fuelled by solid economic growth, a rising middle class and pent-up demand and opportunities for penetration by low-cost carriers. Presently, VivaColombia is the only carrier operating under a low-cost business model in the country. SAS SWOT: final call to establish a sustainable Scandinavian Airlines. SAS has been through many restructuring programmes and capital raisings over a number of years. Yet it still has high unit costs and poor labour productivity, is loss-making and has a weak balance sheet. Latin America low cost carrier freakonomics is a distribution headache.

One very distinct and rather curious aspect of the Latin American online travel market is there for all to see, but few comment on. NB: This is an analysis by Steve Sherlock, an entrepreneur in residence with the Chilean Government’s Startup Chile program. Cathay Pacific promotes cheap 'Fanfares' as quasi answer to LCCs, but structural change is needed. As Jetstar Hong Kong prepares to launch, Hong Kong Airlines weighs transforming Hong Kong Express into an LCC, Spring Airlines moots a Hong Kong base and other LCCs evaluate Hong Kong as a hub, the market has been left wondering about Cathay Pacific's response.