HNA investment in a US airline would boost Hainan Airlines in US-China market, reshape competition. 3-Mar-2016 HNA, the holding company that owns flagship airline Hainan Airlines, has grown a portfolio of airline investments outside greater China that has recently expanded to Brazil’s Azul, and could be extended to include TAP Portugal. 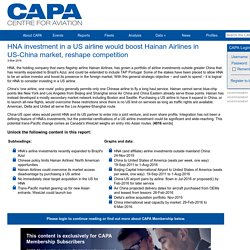 Some of the stakes have been placed to allow HNA to be an active investor and boost its presence in the foreign market. U-FLY Alliance. History[edit] The alliance was formed for various reasons. 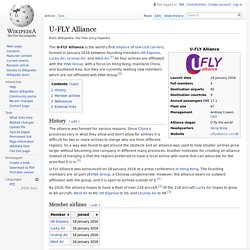 Since China’s provinces vary in what they allow and don’t allow for airlines it is difficult for two or more airlines to merge who are from different regions. So a way was found to get around the obstacle and an alliance was used to help smaller airlines grow larger without becoming one company in different many provinces. Another motivator for creating an alliance instead of merging is that the regions preferred to have a local airline with name that can advocate for the area that it is in.[3] U-FLY Alliance was announced on 18 January 2016 at a press conference in Hong Kong. Member airlines[edit] References[edit] External links[edit] Official website. HNA investment in a US airline would boost Hainan Airlines in US-China market, reshape competition.

Singapore Airlines takeover bid of Tigerair succeeds. Tigerair-Scoot merger may be next. Singapore Airlines (SIA) has increased its stake in Tigerair to above 90%, enabling the group to privatise the short haul low cost airline and fully integrate Tigerair into its portfolio. 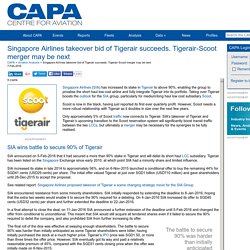 Taking over Tigerair boosts the outlook for the SIA group, particularly for medium/long haul low cost subsidiary Scoot. Scoot is now in the black, having just reported its first ever quarterly profit. However, Scoot needs a more robust relationship with Tigerair as it doubles in size over the next few years. Only approximately 5% of Scoot traffic now connects to Tigerair. SIA’s takeover of Tigerair and Tigerair’s upcoming transition to the Scoot reservation system will significantly boost transit traffic between the two LCCs, but ultimately a merger may be necessary for the synergies to be fully realised. Unbundling its airfares, Lufthansa goads IAG and Air France-KLM. Some have wondered aloud if Lufthansa Group has “gone mad.” 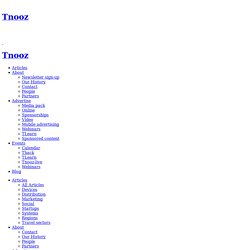 But others say it’s just crazy like a fox. The company has argued that the travel industry must accept freedom in distribution. CIO interview: Mike Croucher, head of IT architecture and delivery, British Airways. Following major changes in IT leadership two years ago, the technology strategy at British Airways (BA) is alive and well, the focus being infrastructure modernisation and increasing revenue through smarter use of customer data to survive through tough economic times. 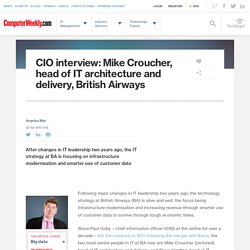 Since Paul Coby – chief information officer (CIO) at the airline for over a decade – left the company in 2011 following the merger with Iberia, the two most senior people in IT at BA now are Mike Croucher (pictured), head of IT architecture and delivery, and Steve Harding, head of IT operations and infrastructure. Both report to Philip Osmond, director of business services. “We never replaced Paul, we just split the IT organisation into two areas. Steve’s role is to run the datacentre operation efficiently, and mine is to lead a department through change,” Croucher told Computer Weekly. He says there is no plan to reinstate the role of CIO at the airline, with BA’s IT department in a better shape under the new set-up. 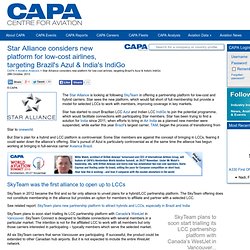 Star sees the new platform, which would fall short of full membership but provide a model for selected LCCs to work with members, improving coverage in key markets. Star has started to court Brazilian LCC Azul and Indian LCC IndiGo to join the potential programme, which would facilitate connections with participating Star members. Star has been trying to find a solution for India since 2011, when efforts to bring in Air India as a planned new member were suspended, while earlier this year Brazil’s largest carrier, TAM, began the process of transitioning from Star to oneworld.

But Star’s plan for a hybrid and LCC platform is controversial. Some Star members are against the concept of bringing in LCCs, fearing it could water down the alliance’s offering. Lufthansa, Air France-KLM, IAG adopt short haul initiatives to combat LCCs: Airlines in transition. The rise and rise of low-cost carriers in Europe has been rapid and, it seems, irreversible. 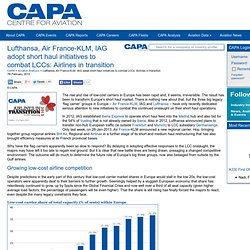 The result has been to transform Europe's short haul market. There is nothing new about that, but the three big legacy ‘flag carrier’ groups in Europe – Air France-KLM, IAG and Lufthansa – have only recently dedicated serious attention to new initiatives to combat this continued onslaught on their short haul operations. In 2012, IAG established Iberia Express to operate short haul feed into the Madrid hub and also bid for the 54% of Vueling that is not already owned by Iberia. Also in 2012, Lufthansa announced plans to transfer non-hub European traffic (ie outside Frankfurt and Munich) to LCC subsidiary Germanwings. Why have the flag carriers apparently been so slow to respond? Growing low-cost airline competition The main hubs have held out quite well against LCC competition. The story is not the same for all, however, so it is worth looking at each of the three groups in turn.