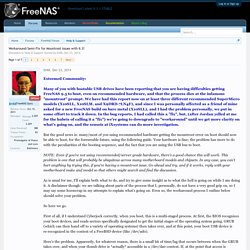 Discussion in 'Help & Support' started by DrKK, Dec 23, 2014. Page 1 of 7 Offline DrKK FreeNAS Guru Member Since: Oct 15, 2013 Messages: 2,029 Message Count: 2,029 Likes Received: 388 Trophy Points: 83 Occupation: Promulgator of Peace and Love Location: Baltimore DrKK, Dec 23, 2014 Esteemed Community: Many of you with bootable USB drives have been reporting that you are having difficulties getting FreeNAS 9.3 to boot, even on recommended hardware, and that the process dies at the infamous "mountroot" prompt. We have had this report now on at least three different recommended SuperMicro models (X10SLL, X10SLM, and X9DRD-7LN4F), and since I was personally affected as a friend of mine asked for a new FreeNAS build on bare metal (X10SLL), and I had the problem personally, we put in some effort to track it down. 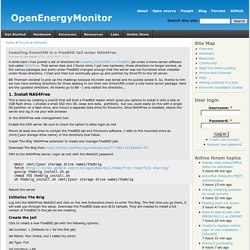 That server died and I found when I got new hardware, those directions no longer worked, as the various packages and ports under FreeBSD changed enough that the server was not functional when installed under those directions. I tried and tried but eventually gave up and pointed my EmonTX to the UK server. Bill Thomson decided to pick up the challenge because his brain was bored and he quickly solved it. So, thanks to him we now have working directions for those seeking to run their own EmonCMS under a nice home server package. Here are the updated directions. 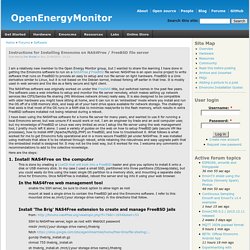 NAS4Free is an open source project to write software that runs on FreeBSD to provide an easy to setup and run file server on light hardware. FreeBSD is a Unix derivative similar to Linux, but it is not based on the Debian kernel, instead forking off earlier in that tree. It is mostly used in web servers and the like as a fairly secure and light client. The NAS4Free software was originally worked on under the FreeNAS title, but switched names in the past few years. The software uses a web interface to setup and monitor the file server remotely, which makes setting up network services like CIFS/Samba file sharing (MS Windows network drives) really easy.

Here are the steps: In the NAS4Free web management tool enable the SSH server, be sure to check option to allow login as root. Write Performance Issues mid-level ZFS setup. A command to list all users? And how to add, delete, modify users? Installing non-PBI Software - Freenas. If a PBI is not available for the software that you wish to install, you can still install and configure the application from the command line of a plugin, port, or standard jail using FreeBSD ports or pkgng packages. 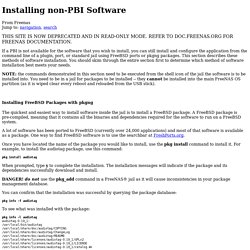 This section describes these methods of software installation. You should skim through the entire section first to determine which method of software installation best meets your needs. NOTE: the commands demonstrated in this section need to be executed from the shell icon of the jail the software is to be installed into. [How-To] Giving Plugins Write Permissions to Your Data. Zoneminder on FreeNas. Connect to Q-See IP cameras. Try the following connection options in iSpy to connect to your Q-See IP camera. 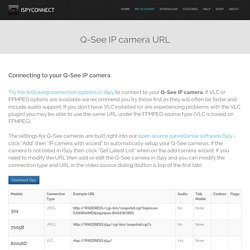 If VLC or FFMPEG options are available we recommend you try those first as they will often be faster and include audio support. If you don't have VLC installed (or are experiencing problems with the VLC plugin) you may be able to use the same URL under the FFMPEG source type (VLC is based on FFMPEG). The settings for Q-See cameras are built right into our open source surveillance software iSpy - click "Add" then "IP camera with wizard" to automatically setup your Q-See cameras. If the camera is not listed in iSpy then click "Get Latest List" when on the add camera wizard. If you need to modify the URL then add or edit the Q-See camera in iSpy and you can modify the connection type and URL in the video source dialog (button is top of the first tab). FreeNAS - Setup of FreeNAS after install and install VirtualBox JAIL OS (Part 5)

What's New with FreeNAS » FreeNAS Plugins (Everything You Ever Wanted to Know) What you will learn… How the FreeNAS plugin architecture worksHow to make FreeNAS plugins what you should know… Basic understanding of FreeBSDSome programming knowledge When FreeNAS entered the 8.x series, many people were not happy that functionality that previously existed was no longer included.

Such functionality was mainly multimedia focused and targeted at the home user. FreeNAS is a very powerful open source operating system based on FreeBSD. Packages can be installed using FreeBSD’s package management system, but care must be taken. Enabling Autostart of VirtualBox-VMs on FreeNAS. There’s the great FreeNAS jail phpVirtualBox. 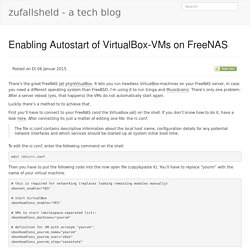 It lets you run headless VirtualBox-machines on your FreeNAS server, in case you need a different operating system than FreeBSD. I’m using it to run Icinga and Musicbrainz. There’s only one problem: After a server reboot (yes, that happens) the VMs do not automatically start again. Rex's Tech House - Install and configure VirtualBox (PhpVirtualBox) Jail on FreeNAS. Install and configure VirtualBox (PhpVirtualBox) Jail on FreeNAS First, make sure you do a fresh installation or have updated your FreeNAS to the latest version such as 9.3 VirtualBox has been already included in the new version as a jail template. 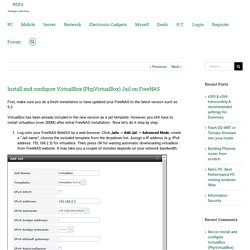 However, you still have to install virtualbox (over 300M) after initial FreeNAS installation . Now let’s do it step by step: Log onto your FreeNAS WebGUI by a web browser. 2.When finished, virtualbox will install automatically and FreeNAS will reboot. Open a web browser and type your virtualbox IP (e.g. 192.168.2.3) to log in your virtualbox GUI By default, both username and password are admin New you can create your own virtual machines.

Post-Installation & Troubleshooting: By default, virtualbox’s machine DVD-rom can only load OS image files which are in the default directory of /mnt/XXX/jails/virtualbox.To be convenient , you could add this path in the FreeNAS Sharing-> Windows(CIFS) or others, and set permission in the storage.