Lukla Airport- Most Extreme Airports In The World. When you decide to visit Nepal, you can expect the unexpected. 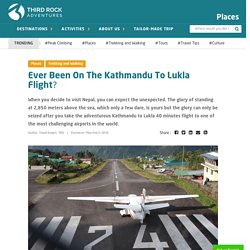 Picture yourself sitting inside a small twin otter propeller along with twenty others, a bumpy 40 minute flight to one of the most challenging airports in the world. Imagine sitting in a small circular tube where you can see the entire cockpit crew fighting against gravity. Have you ever wondered how ‘James Bond’ feels breaking through the clouds and reappearing on the other side?

Fly to Lukla, and feel the adrenalin rush as you see the Lukla airport runway, which is literally built on a steep incline of a hillside. Lobuche Peak Climbing- Gear list that will help you summit. Lobuche Peak Climbing is one of the most sought after Himalayan Trekking peaks of Nepal, considering the trekking route of legendary Everest Base Camp it follows and its technical ascent over 6000m. 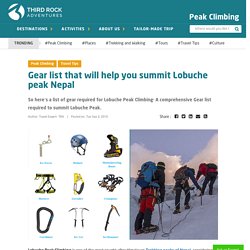 Prominently standing at an altitude of 6119m in Everest Region, Lobuche Peak climbing is gaining popularity among climbers, alpinists, and adventurers for the mind-boggling panoramic views of the Himalayas including the mighty Everest, Lhotse, Pumori, Ama Dablam, Nuptse, Island Peak, and others. From the summit, the jagged Himalayas are out of this world. Top 10 Tips for successful Mera Peak Climbing. Mera Peak owns a title- "Nepal's Highest Trekking Peak" and offers oodles of rewards to climbers and adventure seekers. 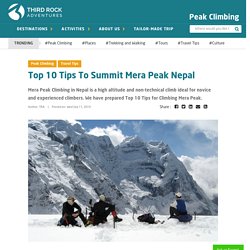 One of the noteworthy rewards of embarking on an adventure to Mera peak is the incredible panoramic views of some of the highest mountains in the world including Mount Everest. Kanchenjunga (8586m), Lhotse (8516m), Cho Oyu (8188m) and Makalu (8485m) as seen from High camp and the summit are truly breath-taking. Top 10 Tips for successful Island Peak Climbing. Do you want to upgrade yourself from avid trekker to mountaineer? 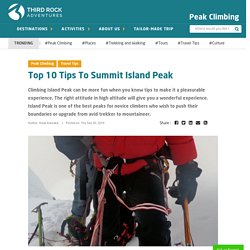 Every mountaineer must have started their climb from a mountain. The first summit is always special and Island Peak Climb is perfect for beginners. It will be an unforgettable journey where you will be challenging yourself which will show you that you are capable beyond what you thought possible. You can make your Island Peak Climb more pleasurable my knowing all the tips. In this article, we will shed light not only on the technical aspect of climbing but also tell you things you should incorporate while preparing physically and mentally. 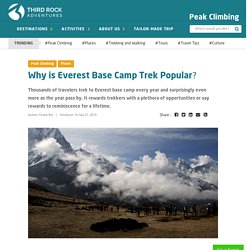 You must have heard of it. Or let's say you must have read about it or let's assume you are planning for it. Or at least it is in your bucket list. Nepal-Best time to Visit nepal - Plan your perfect vacation. Though Spring and Autumn are said to be the best seasons to travel to Nepal, this beautiful country can be visited anytime of the year. 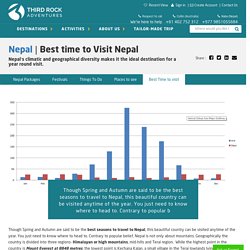 You just need to know where to head to. Contrary to popular belief, Nepal is not only about mountains. Geographically the country is divided into three regions- Himalayan or high mountains, mid-hills and Terai region. Bhutan-Best Time to Visit Bhutan. Bhutan is a small landlocked country located deep in the Himalayas. 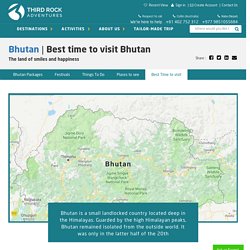 Guarded by the high Himalayan peaks, Bhutan remained isolated from the outside world. It was only in the latter half of the 20th century that the country opened its doors to outsiders. The country though small, has a very diverse climate. Everest Base Camp Trek-Third Rock Adventures - Google Maps. Bhutan-Punakha Dzong in Bhutan. The beautiful Punakha Dzong lies at the confluence of the Po Chu and the Mo Chu Rivers. 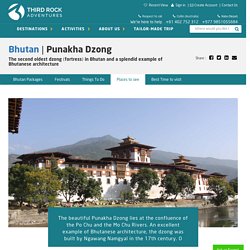 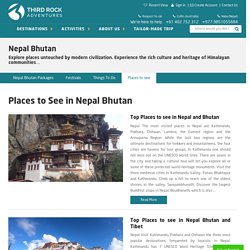 While the last two regions are the ultimate destinations for trekkers and mountaineers, the four cities are havens for tour groups. In Kathmandu one should not miss out on the UNESCO World Sites. There are seven in the city and taking a cultural tour will let you explore all or some of these protected world heritage monuments. Nepal Bhutan Tour - Things to do. Top things to do in Nepal Tibet Bhutan Nepal Nepal is known as the land of soaring Himalayan peaks, medieval palaces, ancient Hindu and Buddhist shrines. 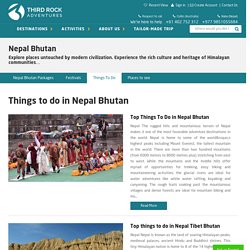 Nepal Bhutan Tour - Festivals. Major Festival In Nepal Bhutan Nepal With more than 120 ethnic groups populating its mountainous regions and lowland areas, Nepal is a melting pot of cultures. Though Hinduism and Buddhism are the two major religions in the country, each ethnic group has its own customs and festivals. There is at least one festival celebrated each month in the Nepalese calendar. While there are lots of festivals celebrated in the &nbsp;country, the two biggest festivals are Dashain and Tihar. Celebrated over several days, these festivals are occasions for family get-togethers and bonding. Nepal Bhutan Tour.

I am Werner Berger and my "claim to fame" is probably best defined as being in the Guinness Book of World Records as the oldest person in the world to have climbed the highest mountain on each of the seven continents, including Mt. Everest. Little did I know my life was to change forever on my first trek into the Himalaya in 1992 at age 55. It was the beginning and just a matter time before I realized I could combine my leadership and climbing skills to create a program in which people could explore their own possibilities. So, in 2010, I began leading Transformational Life Experiences, treks to Mt. Everest Base Camp and other high places. One of the earliest keys to success is to find a company with the right mix of professionalism, support, and, of course, experience. Naba's caring and climber support, is second to none. Bhutan Trip - Explore the Land of Smiles and Happiness. Endless stretches of forest, Happy People and a culture where Buddhism is a way of life.

Experience Bhutan, the Land of Smiles… Visit Bhutan, the ‘Land of the Thunder Dragon’. A Himalayan kingdom nestled deep amidst the high Himalayan mountains is a unique destination. Isolated from the outside world for centuries, this fascinating country was once known as Shangri La, the hidden kingdom. Take a journey to this mystical country and experience a rich and vibrant Vajrayana Buddhist culture. Nepal - Experience Adventures holidays in the Himalayas. Explore Nepal | Experience the best of adventures, Himalayan culture and spiritualism…. Blessed with natural beauty and magnificent sights, Nepal often makes it to the list of ‘must-visit’ destinations in the world. With eight of the world’s highest peaks and a chain of mountains stretching from east to west, the country is a paradise for trekking and climbing enthusiasts. Nepal is also home to ten UNESCO World Heritage Sites. Book a Nepal cultural tour package and discover ancient world heritage sites.

Explore the tropical jungles of Terai plains. Peak Climbing in Nepal, Popular Peak Climbing Adventures. I am Werner Berger and my "claim to fame" is probably best defined as being in the Guinness Book of World Records as the oldest person in the world to have climbed the highest mountain on each of the seven continents, including Mt. Everest. Little did I know my life was to change forever on my first trek into the Himalaya in 1992 at age 55. It was the beginning and just a matter time before I realized I could combine my leadership and climbing skills to create a program in which people could explore their own possibilities. So, in 2010, I began leading Transformational Life Experiences, treks to Mt. Everest Base Camp and other high places. One of the earliest keys to success is to find a company with the right mix of professionalism, support, and, of course, experience.

Naba's caring and climber support, is second to none. Cultural And City Tours in Asia - Unique Experience. Culture and heritage of any city are sure to leave you spellbound because the heritage is what shapes our present and future. Culture and heritage tour allows one to visit sites of historical importance. Trekking in Nepal - Awesome Treks in Nepal Himalaya. Helicopter Tours in Nepal-Himalayas Heli Ride. Mera Peak Climb: Chasing The Mera Summit- Here's What I found. Trekking in the Himalayas - Nepal Trekking. The Road to Ramechhap, Manthali from Kathmandu - A short Video. Travelling to Nepal - Major Highlights #Nepal. YouTube. YouTube. Top 10 Places To Visit In Nepal- Best Tourist Place In Nepal. Trekking and Walking Trek on days to reach the ultimate viewpoint or take advantage of a popular vantage point from the top of a hill to view the Himalayas Author: Travel Expert- TRAPosted on: Wed Jan 16, 2019 Nepal is a true gift of Mother Nature to all of us.

We have been blessed with such beauty that one really has to be here to believe. If there is heaven anywhere on earth, it is in Nepal. Need To Know About Everest Base Camp Trek- Top 10 FAQs answered! How to plan a perfect holiday - Most useful travel tips. Everest Base Camp Trek In October - Third Rock Adventures. Trekking Everest Base Camp in October: Weather, Temperature. Manaslu Circuit Trek - Need inspiration for your next adventure? Nepal and Bhutan Buddhist Pilgrimage Tour - Sacred Journey. Nepal: In Kathmandu stay at Hotel Shanker, a 4 star hotel located in the heart of the city. 10 Of Best Things To Do In Kathmandu, Nepal. Kathmandu city, a multicultural melting pot which is greeting the early dawn of modern-day urbanization yet keeping its deeply rooted cultural essence alive and intact.

Kathmandu’s rich diversity in arts and culture can be attributed to the fact that once it was a trade point and route between two distinctive civilizations, India to the south and Tibet to the north. This resplendent city has more to this than meets the eye. At first glance, the chaotic buildings, boisterous crowd and exasperating traffic can be off-putting but once you start exploring even a narrow gully or a chowk, you will be astounded with how much it has to offer to gratify the wanderlust in you. Mardi Trek - Easy And Short Trek in Annapurna Region. Everest Base Camp Luxury Lodge Trek 12 Days - Fly Back By Helicopter. Nepal Bhutan Tibet 14 Days - Cultural Tour and Day Hiking. Nepal Bhutan Tour 9 Days - Private and Small Group Tour. Fly to Everest – Heli flight is an easy alternative to Everest trekking. 2 Weeks in Nepal-Bhutan - Where to Go? - Nepal Bhutan travel Blog.