ThinkSys Inc has set up a benchmark by delivering excellent, cost effective and efficient IT solutions to its clients all around the world. At ThinkSys, we have set up dedicated teams with decades of relevant experience in all fields of technologies.

Regression Testing In Agile Scenario. 5 Types Of Performance Testing You Need To Know. By slowing down the search results by only 4/10th of a second, Google found that it would reduce the number of searches by 8,000,000 per day! 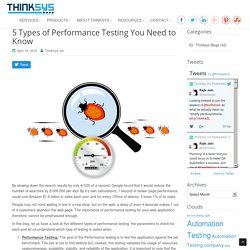 By it’s own calculations, 1 second of slower page performance could cost Amazon $1.6 billion in sales each year and for every 100ms of latency, it loses 1% of its sales. People may not mind waiting in line in a real shop, but on the web, a delay of even 4 seconds makes 1 out of 4 customers abandon the web page. The importance of performance testing for your web application, therefore, cannot be emphasized enough. Role Of Software Testing DevOps. By Rajiv Jain: Mark Berry said, “Programmers don’t burn out on hard work, they burn out on change-with-the-wind directives and not ‘shipping’”. 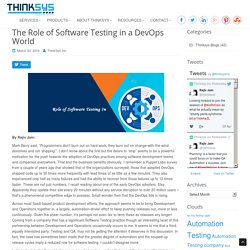 I don’t know about the first but the desire to “ship” seems to be a powerful motivation for the push towards the adoption of DevOps practices among software development teams and companies everywhere. That and the business benefits obviously. Mobile Apps Development Mistakes To Avoid. Take a look at some of these fun statistics: • There are 6.8 billion people on the planet. 5.1 billion of them own a cell phone Source: Mobile Marketing Association Asia) • It takes 90 minutes for the average person to respond to an email. 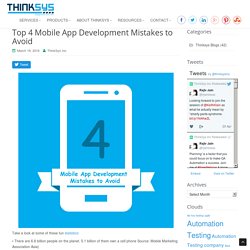 It takes 90 seconds for the average person to respond to a text message. (Source: CTIA.org) • 70% of all mobile searches result in action within 1 hour. (Source: Mobile Marketer) • 91% of all U.S. citizens have their mobile device within reach 24/7. Retesting Vs. Regression Testing. A Cloud Migration Checklist. An increasing number of enterprises today are migrating to the Cloud. 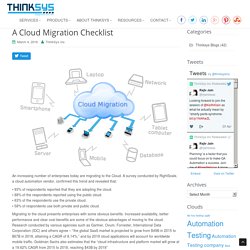 A survey conducted by RightScale, a cloud automation vendor, confirmed this trend and revealed that: • 93% of respondents reported that they are adopting the cloud. • 88% of the respondents reported using the public cloud. • 63% of the respondents use the private cloud. • 58% of respondents use both private and public cloud. Migrating to the cloud presents enterprises with some obvious benefits. Increased availability, better performance and clear cost benefits are some of the obvious advantages of moving to the cloud. Research conducted by various agencies such as Gartner, Ovum, Forrester, International Data Corporation (IDC) and others agree – “the global SaaS market is projected to grow from $49B in 2015 to $67B in 2018, attaining a CAGR of 8.14%.” and by 2019 cloud applications will account for worldwide mobile traffic. Evaluating costs:- So, should you opt for a private cloud, public cloud or hybrid cloud? What Role Does Test Automation Play In Functional, Unit, Performance Testing?

As technology becomes more embedded into business processes, testing is becoming an area of strategic importance. 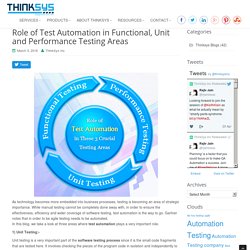 While manual testing cannot be completely done away with, in order to ensure the effectiveness, efficiency and wider coverage of software testing, test automation is the way to go. Gartner notes that in order to be agile testing needs to be automated. In this blog, we take a look at three areas where test automation plays a very important role. 1) Unit Testing:- Choosing Right Test Automation Outsourcing Partners. “The bitterness of poor quality remains long after the sweetness of meeting the schedule has been forgotten.”– Anonymous The importance of software testing cannot be reinforced more. 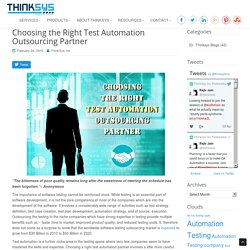 While testing is an essential part of software development, it is not the core competency of most of the companies which are into the development of the software. It involves a considerably wide range of activities such as test strategy definition, test case creation, test plan development, automation strategy, and of course, execution. Outsourcing the testing to the niche companies which have strong expertise in testing provide multiple benefits such as – faster time to market, improved product quality, and reduced testing costs. It, therefore, does not come as a surprise to know that the worldwide software testing outsourcing market is expected to grow from $30 Billion in 2010 to $50 Billion in 2020. 1) Business Understanding.

Test Automation Role In The MVP Way Of Life? By Rajiv Jain: Us veterans of the software product development game may be forgiven a bit of confusion these days. 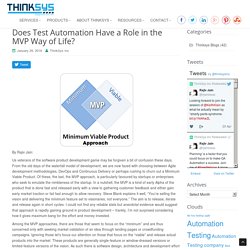 From the old days of the waterfall model of development, we are now faced with choosing between Agile development methodologies, DevOps and Continuous Delivery or perhaps rushing to churn out a Minimum Viable Product. Of these, the last, the MVP approach, is particularly favoured by startups or enterprises who seek to emulate the nimbleness of the startup. In a nutshell, the MVP is a kind of early Alpha of the product that is done fast and released early with a view to gathering customer feedback and either gain early market traction or fail fast enough to allow recovery. Steve Blank explains it well, “You’re selling the vision and delivering the minimum feature set to visionaries, not everyone.” Should Developers Test Their Own Code/ Work? “I don’t care if it works on your machine! 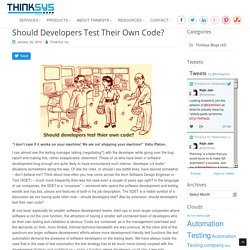 Software Testing Trends Of 2016. Nelson Hall predicts that by 2017, the software testing market size will be $34 Billion. 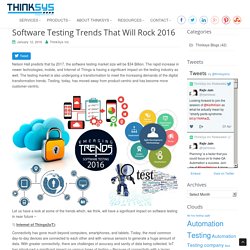 The rapid increase in newer technologies, mobile, and Internet of Things is having a significant impact on the testing industry as well. The testing market is also undergoing a transformation to meet the increasing demands of the digital transformation trends. Testing, today, has moved away from product-centric and has become more customer-centric. Favorite Test Automation Tools And Technologies. A quick search for “Test Automation Tools” on Google returns 8,21,00,000 results. 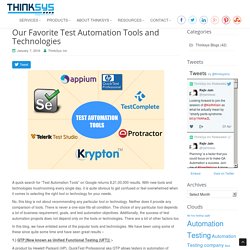 With new tools and technologies mushrooming every single day, it is quite obvious to get confused or feel overwhelmed when it comes to selecting the right tool or technology for your needs. No, this blog is not about recommending any particular tool or technology. Neither does it provide any comparison of tools. There is never a one-size-fits-all condition. 8 Reasons Why Your Web Apps Need To Use AngularJS.

Developers love AngularJS. They just really really love it. Don’t believe us? Look at the GitHub activity. AngularJS probably has the highest number of contributions than any other competing JavaScript framework. Check out Google searches or even StackOverflow mentions – AngularJS is all over. Job trends on Indeed.com, a developer jobs site, also show a strong bias towards AngularJS than any other framework. The Mobile Choices You Have To Make. By:- Rajiv Jain “The future of mobile is the future of online. It is how people access online content now.” – David Murphy, Founder and Editor of Mobile Marketing Daily Earlier this year a major shift in the balance of power took place – almost unnoticed.

Statista reports that now 52.7 of all internet access is now from the mobile. Key Considerations In Localization Testing - ThinkSys. The spectacular growth of the software industry and globalization has made it easy for software vendors to target the non-English speaking geographies, reach out to a wider audience, and spread their footprint. With wider coverage, software product companies are increasing their chances of capturing a larger market share. Such fantastic plans also come with their own set of challenges. Launching the product in multiple geographies means that the product needs to work flawlessly in various regions from the day of the launch.

8 Reasons Why Your Web Apps Need to Use AngularJS - ThinkSys. Test Automation May Not Be Right For You - ThinkSys. The wonderful book, “Implementing Automated Software Testing” authored by Elfriede Dustin, Thom Garrett, and Bernie Gauf, mentions a worldwide survey they conducted on the subject. The online survey got over 700 responses and among a host of interesting results they included in their book was a startling finding.

They reported that 72% of the survey respondents believed that automation was useful and even that their management agreed but despite that they either had not implemented it at all or had had only limited success. The book came out in 2009 and how things seem to have changed since then. Anecdotal evidence, at the very least, would seem to show that most software development efforts today consider automation initiatives somewhere along the way. Much has been written about why one should choose to automate testing – there are great technical as well as commercial arguments. Yes – You Can Automate UI Testing. The Economic Argument For Test Automation. Creating Effective Bugs.

The Business Considerations Behind Your Web Technology Choice. 9 Enterprise App Ideas Which Can Improve your Business. Gartner predicts that by the end of the year 2017, market demand for mobile app development services will grow at least five times faster than internal IT organizations’ capacity to deliver them. Burgeoning Demand for Mobile Apps. Statistics is showing great demand for mobile test automation. As per the estimates of International Telecommunication Union, about 6.8 billion people have mobile subscription. Ensuring Success of Automated Software Testing. Emerging Trends In Software Testing To Look For.

Competitive pressure and constant evolution keep improving the standards of quality assurance. Here are a few emerging trends in software testing to look for. Test Automation – At Home in an Agile Environment. Characteristics of an Ace Test Automation Suite. “In some situations, the most important objective of testing is to find as many important bugs as possible. In other situations, finding bugs is not important at all. Will Windows 10 Change Application Development ? ThinkSys Launch of Krypton, an Innovative Open Source Test Automation Tool, Saw an Overwhelming Response at STARWEST Techwell Event, California. What Should an Ideal Test Automation Team Look Like? Myths About Usability Testing. Building Blocks of a Solid Test Automation Strategy. Top 7 Challenges in Mobile App Testing. Scrum & Kanban Agile Development Tool.

Top Agile and Scrum Tools - Which One Is Best? Business Software and Mobile Apps.