Everything You Need to Know about African Civilisations. Share this Africa’s Civilizations: Paving The Path For The Growth Of Other Civilizations World Wide Most of the people have been falsely taught that the ancient Africans had little or nothing to do with the development and progression of civilization. 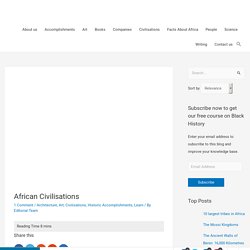 The richest man in history: Who was mansa musa and why was he so Famous? - Think Africa. Share this When you talk about the richest humans that have ever existed whose accounts were recorded in history, the name Mansa Musa is always right up there. 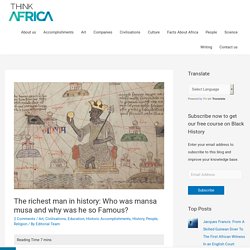 All evidence indicates that he is very likely the richest human being that has ever lived[1]. His wealth is estimated to be worth over $400 billion[2]. Mansa Musa of Mali is known by many names; Kankou Musa, Kankan Musa, Kanku Musa, Mali-Koy Kankan Musa, Gonga Musa. As a man of immense wealth and power, he was also accorded many titles some of which are: The Lion of Mali, Emir of Melle, Lord of The Mines of Wangara, Conqueror of Ghanata.

He was born in 1280 and is widely believed to have died in 1337[3]. Musa’s wealth at the time was of such a level that the world has never witnessed. Largest Companies in Africa: Top 100 - Think Africa. In a recent survey by McKinsey Africa undertaken in 2018, they discovered 438 businesses with $1 billion of annual sales. 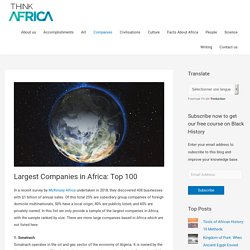 Of this total 25% are subsidiary group companies of foreign domicile multinationals, 50% have a local origin, 40% are publicly listed, and 60% are privately owned. In this list we only provide a sample of the largest companies in Africa, with the sample ranked by size. There are more large companies based in Africa which are not listed here. 1. Dutch wax prints: aka AFRICAN WAX PRINTS Think Africa. Share this Dutch wax prints fabrics go by many names; Ankara wax prints, Ankara, African wax prints, African prints, Holland wax, Dutch wax, wax Hollandais, veritable Dutch Hollandais. 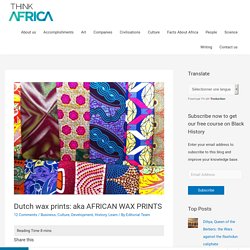 They are 100% cotton fabrics that are generally associated with Africa because of their bright and colourful patterns which usually resonates with African art themes and motifs. One primary characteristic of Dutch wax is in the colour intensity of the prints on both sides of the fabric, which are even. African Celebrities dressed in Ankara Fabric clothes (Source) Black History By ThinkAfrica. Everything You Need to Know about African Civilisations @ThinkAfrica. The Borana Calendar and How it works (Existing from 300 BC until Today) - Think Africa. Share this Many non-Africans sometimes wonder, “Did Africa invent anything?” 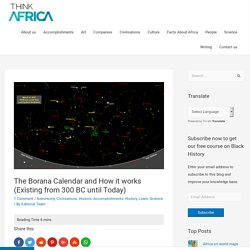 The unambiguous answer is yes: a lot of things. One of these inventions was a calendar system by Borana people of Ethiopia at a date as old as when Greece invented the Athenian calendar (an ancient calendar also known as the Attic Calendar). The Garamantes: The Civilisation that mined Fossil Water from the Sahara for 1,000 Years - Think Africa. Share this 700 miles south from the Mediterranean coast, there, stretches a sub-beaten arid African desert, with temperatures that can rise up to 55 ºC in the summer, an average annual rainfall that is less than half an inch, and sometimes even it doesn’t see rain for years. 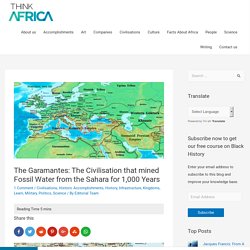 One would never imagine that a lost 3,000-year-old-African civilization once existed in this part of the desert in southern Libya, a civilization that will help reshape the history of ancient Africa. This mysterious civilization of the ancient Saharan people is known as, the Garamantes. If you tried to visualize the Garamantes, you would probably paint a mental picture of nomadic encampments, scattered villages and desert barbarians. However, the truth might surprise you when you know that the Garamantes built about three impressive cities, had a written language, pyramid tombs, armies of chariots and cavalry and ruled an empire of 70,000 square miles in the middle of the world’s largest desert.

Bibliography. Everything You Need to Know about African Civilisations. Africa's Diversity - African Civilisations - Think Africa. Share this Africa, the second largest continent in the world and second most populous continent on earth, is blessed in manifold ways; in language, culture, art, monuments, vegetation, religious ideas, physical quality, natural resources, and many more areas. 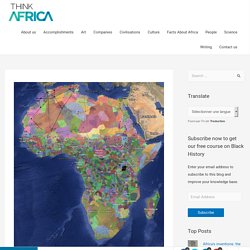 Though there have been many concepts and definitions regarding the idea of diversity, the indigenous ideas of Africans societies have had much to reveal about the possible elements of culture and ethnicity with differences in class, languages, religions, and gender roles. Africa’s diversity on the map (source) Myths About African Suez Canal In African Civilisations. Share this Africa is an ancient and great continent, the first home of humans. 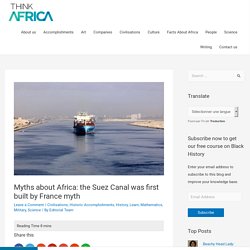 A continent in which its ancient peoples through numerous foundational inventions opened the doors of advancement to the world. Over time a great many of her contributions to human development and advancement has been lost, forgotten or unjustly denied credit. Some of the inventions and creations of its early inhabitants, however, cannot be denied and even in present-day still stands out and is clear for all to see. While some over time have become myths, shrouded in mystery over whom the originators were. What is the Suez canal? The Suez Canal Just like many foundational works of Africans that have been advanced or expanded upon by Europeans and all the credit accorded to the later, while the originators are relegated to the background. African Achievements. Ivory Bangle Lady In African History. Share this There have been many misconceptions when it comes to the status of Africans who lived at much earlier times like the 13th to 18th century and even earlier in the 1st to 6th centuries, particularly Africans that happen to live overseas in what is today Europe and the USA. 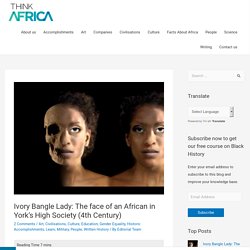 There is a wrong assumption that all Africans who lived during those times were either slaves or second- class citizens; assumptions that are gradually but surely being set right. Yet another proof of this is the discovery of the burial site of an African woman popularly known as the Ivory Bangle Lady in the ancient city of York, Northern England. She was found buried in a stone sarcophagus. Her burial site was accidentally unearthed in 1901 by workers going about the task of expanding a street near Sycamore Terrace York which lies mid-way between Bootham and the River Ouse.

A MAP SHOWING LOCATION OF BURIAL SITE IN YORK( SOME GRAVE GOODS FOUND AT BURIAL SITE (source) BOYNTON, T. 1902. Related. A Guide on African History, African Civilisations and African Achievements. African Achievements In Writing - Think Africa. Share this African Writing Systems There are fifteen African writing systems that predate English, yet ask around if Africa had writing before colonization and some people are likely to deny that Africa had any writing systems before 1500 AD. 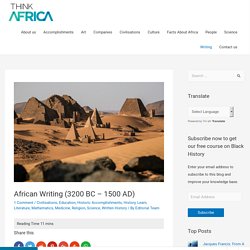 Not many people know that there are even African writing systems that predate Latin. Africa's Inventions: Algorithms - Think Africa. Share this You relax comfortably on your couch while typing and clicking away on your smartphone or computer, as satellites are launched into orbit, artificial intelligence performs a wide range of tasks, and the markets are flooded with uncountable electronic gadgets that perform almost any task you can think of. But did you know that all these feats could not have been achieved without a fundamental mathematical principle, an underlying set of instructions, an algorithm: an idea that originated from Africa and was invented by Africans?

An algorithm in layman’s terms means an established, detailed and structured step by step instruction aimed towards solving a problem or carrying out a task. Actually, we employ algorithms in everyday tasks; a food recipe is an algorithm, a do it yourself guide is an algorithm. Africa’s Contributions to human advancement are often downplayed. African Civilisations - Think Africa. The 20-palace complex of 17th Century Ethiopia In Africas Civilisations By Think Africa. Share this Up until the 17th century, notably between the 13th and 17th century, Ethiopian emperors did not have any permanent location or structure within their territory in which they resided.

They were always on the move with their royal camps referred to as “Katama[1]” Living off the proceeds of their subjects where ever they temporarily settled, this was an Ethiopian tradition. This centuries-old tradition was broken by Emperor Fasilides, a member of the Solomonic dynasty who reigned from 1632 to 1667. In 1636 he built a small city in Gondar, a fortress befitting his status as emperor and established it as a capital for future emperors, thus ending the nomadic lifestyle of living in tents and moving from place to place by his predecessors.

This fortress-city is called Fasil Ghebbi. Tools of African History: the Lukasa Memory Board of the Luba Kingdom - By Thnk Africa. Africa's Religions, History & Civilisations - Think Africa. Share this One cannot generalize about the nature of African religions as he would be prone to making the mistake of homogeneity among all African cultures. Africa, in truth, is vast both in cultural diversity and geographical variation. This has brought about different languages and customs that have different belief systems. With the different histories associated with the over 55 countries in Africa, we see the diversity in their religious beliefs even from ancient times. African Civilisations. Everything You Need to Know about African Civilisations. African Civilisations By Think Africa. Share this What Causes Violence? Human violence is as old as humanity itself.

Humans have always been prone to violence ever since their debut on the planet. A Guide on African History, African Civilisations and African Achievements. Africa's inventions, Medicine, Medical writing, Medical schools, Surgery By Think Africa. African History Think Africa. The Guide Of African History, African Civilisations & African Achievements. Black History: Unknown Facts About African Black People. Africa is the 2nd most populous continent on earth. It is home to a population of 1.1 billion to 1.2 billion people, with further Africans living in diaspora on other continents. It is the 2nd largest continent by area, able to fit the United States of America into its land mass three times. The average African speaks anything from three to seven languages and in total more than 2,000 languages are spoken on the continent.

Prior to colonisation, Africa was divided into close to 10,000 different states. Some polities were multi-ethnic such as the federation of Kwararafa. Cave art In Afriican History By Think Africa. Share this Africa’s contributions to the development of the world are immense. Sadly, her achievements and inputs are downplayed or misrepresented, but it still does not change the fact that most of Africa’s inventions were the foundation upon which human development advanced.

It existed from the year 578 AD to 708 AD. African History. Myths About African Achievement By Think Africa. The richest man in history: Who was mansa musa and why was he so Famous? - African Civilization - Think Africa. Black history.