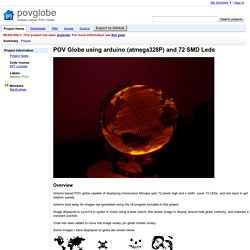 (uses 72 LEDs, and one input to get rotation speed) Arduino byte array for images are generated using the c# program included in this project Image displayed is synch'd to speed of motor using a reed switch, this allows image to display around hole globe correctly, and maintain a constant position. Code has been added to move the image slowly (so globe rotates nicely) Some Images I have displayed on globe are shown below. The 'One Chip Spinning RGB POV Display' with conversion software. If you have been on the look out for a project that combines, RGB LED's, a motor, a microcontroller and a ridiculous amount of hot melt glue, then you have certainly come to the right place. 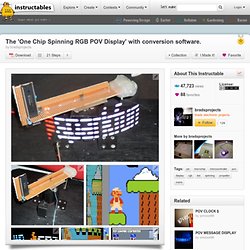 Allow me to introduce the 'One Chip' Spinning RGB POV Display This project allows you to create (with minimal components) a fantastic customizable display capable of displaying graphics, animations and text. You can scroll your graphics from top to bottom or use it as a scrolling message display, scrolling from right to left. The project uses just one chip, eight RGB LED's and a handful of other components to paint animations in 'mid-air! ' Plus, together with the included graphic conversion software (download link in step 2) you can easily create your own animations because the software creates all the code for you.

So please, read on and enjoy! PIC clock. The heart of this clock is PIC16F84 microcontroller. (Older PIC16C84 version works just fine). The microcontroller is programmed with the code provided below. First, mechanical stuff. We will use a 12V automotive fan (sells for $12.95) as a kit, containing almost all nesessary mechanical parts. The only extra part you'll need is a ball bearing and brass tube about 2mm in diameter. First you'll need to take the fan apart. Next step is disassembling the motor. Finished rotor should look like this. Remove the small sleeve bearing from the plastic part. Take the small plastic gear from the fan's swinging mechanism and insert it into the ball bearing tightly. Now it's time to assemble the motor. Now the fun part: assembling the electronics. Place all the components on a piece of prototyping board, soldering components to the plated-through holes. Once components are connected together, make the bar with LEDs. 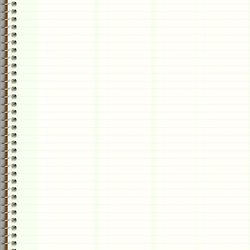 Propeller Clock © Copyright 1997 Bob Blick An Analog & Digital propeller clock i made! It isnt Real its just because your so awfully slow!!! ;-) based on an afterimage phenomenon, ie the reaction slowness of the retina, the illusion of reality our brains are "lying" Picture's made 12-12-1997 by Luberth Dijkman Clock was actually running 2 weeks earlyer Bob Blick started the propeller clock This clock is based on Don Zehnder's Clock. Above Don Zehnder's first analog version I saw his analog version and asked if i could have his code and i build my version with a bit more LED's to circle center and an outher circle LED in 1997 Simple slip spring ring to get power on rotating propeller Some technical information! Luberth Dijkman Andijk Holland 12-12-1997.

Projects - Rotating led display. I've always liked all kinds of led displays and a rotating one is maybe one of the most interesting ones. 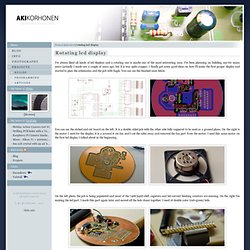 I've been planning on building one for many years (actually I made one a couple of years ago, but it is was quite crappy). I finally got some good ideas on how I'll make the first proper display and started to plan the schematics and the pcb with Eagle. You can see the finished ones below. led_display_schematics_1.png led_display_pcb_1.png. Rotating LED Display - Alan Parekh’s Electronic Projects. The left image is with the lights off the column of LEDs are rotating in a circle displaying the word “LEDS”. 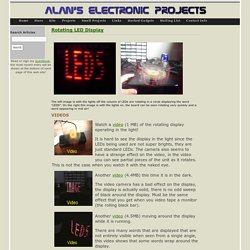 On the right this image is with the lights on, the board can be seen rotating very quickly and a word appearing in mid air! Is this an original idea? No. The propeller clock by Bob Blick was the inspiration for this display, the concept is the same but instead of just number I am displaying letters. Take a look at the links for more examples of similar devices. This unit has a single column of LEDs that are spinning in a left to right motion, as it spins a microcontroller keeps track of the exact position of the board.

Be informed when new projects are available or additional project information is posted by signing up to our mailing list. This is a long exposure shot with a regular digital camera. The LEDs are too directional, that is why the center appears brighter in this picture. This is the start up sequence, it is blurred because of the long exposure. Low light picture. Front.