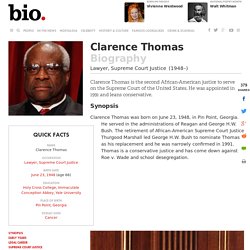 He was appointed in 1991 and leans conservative. Synopsis. Biographies of Current Justices of the Supreme Court. Clarence Thomas. From humble beginnings, by dint of hard work and a little luck, Clarence Thomas arrived at the pinnacle of American law. 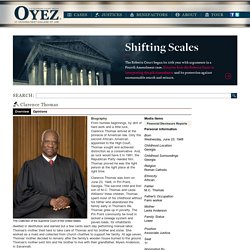 Only the second African- American appointed to the High Court, Thomas sought and achieved distinction as a conservative. And, as luck would have it in 1991, the Republican Party needed him. 14a840_gol1.pdf. Supreme Court agrees to hear gay marriage issue. The Supreme Court announced Friday that it will decide a historic question about whether the Constitution requires that same-sex couples be allowed to marry no matter where they live or whether states are free to limit wedlock to its traditional definition as a union only between a man and a woman. 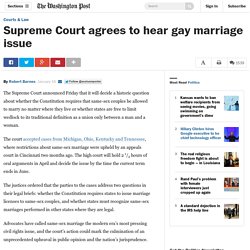 The court accepted cases from Michigan, Ohio, Kentucky and Tennessee, where restrictions about same-sex marriage were upheld by an appeals court in Cincinnati two months ago. The high court will hold 2hours of oral arguments in April and decide the issue by the time the current term ends in June. The justices ordered that the parties to the cases address two questions in their legal briefs: whether the Constitution requires states to issue marriage licenses to same-sex couples, and whether states must recognize same-sex marriages performed in other states where they are legal.

Couples may now marry in 36 states and the District. Clarence Thomas faults Supreme Court for refusing to block gay marriage in Alabama. The most prominent sign that the Supreme Court is poised to recognize a constitutional right for same-sex couples to marry nationwide came Monday from an unlikely source: conservative Justice Clarence Thomas. 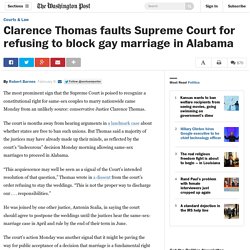 The court is months away from hearing arguments in a landmark case about whether states are free to ban such unions. But Thomas said a majority of the justices may have already made up their minds, as reflected by the court’s “indecorous” decision Monday morning allowing same-sex marriages to proceed in Alabama. “This acquiescence may well be seen as a signal of the Court’s intended resolution of that question,” Thomas wrote in a dissent from the court’s order refusing to stay the weddings. “This is not the proper way to discharge our . . . responsibilities.” LII: US Supreme Court: Justice Thomas. Recent Decisions by Justice Thomas Biographical Data Birth, Residence, and Family Born June 23, 1948 in the Pinpoint community, near Savannah, Georgia. 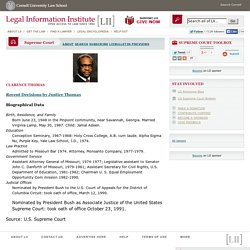 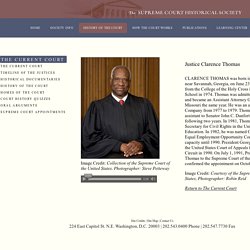 He was graduated from the College of the Holy Cross in 1971 and from Yale Law School in 1974. Thomas was admitted to the Missouri bar in 1974 and became an Assistant Attorney General of the State of Missouri the same year. He was an attorney for the Monsanto Company from 1977 to 1979. Thomas served as legislative assistant to Senator John C. Clarence Thomas’s Disgraceful Silence - The New Yorker. As of this Saturday, February 22nd, eight years will have passed since Clarence Thomas last asked a question during a Supreme Court oral argument. 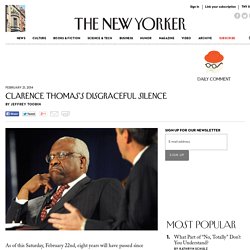 His behavior on the bench has gone from curious to bizarre to downright embarrassing, for himself and for the institution he represents. This point was especially apparent on January 13th, when the Court considered the case of National Labor Relations Board v. Noel Canning, which raises important questions about the President’s ability to fill vacancies when the Senate is in recess. It was a superb argument—highly skilled lawyers engaging with eight inquisitive judges.

Partners - The New Yorker. It has been, in certain respects, a difficult year for Clarence Thomas. 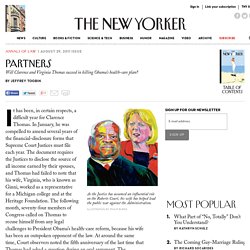 In January, he was compelled to amend several years of the financial-disclosure forms that Supreme Court Justices must file each year. The document requires the Justices to disclose the source of all income earned by their spouses, and Thomas had failed to note that his wife, Virginia, who is known as Ginni, worked as a representative for a Michigan college and at the Heritage Foundation. The following month, seventy-four members of Congress called on Thomas to recuse himself from any legal challenges to President Obama’s health-care reform, because his wife has been an outspoken opponent of the law.

At around the same time, Court observers noted the fifth anniversary of the last time that Thomas had asked a question during an oral argument. These tempests obscure a larger truth about Thomas: that this year has also been, for him, a moment of triumph. Friendship of Justice and Magnate Puts Focus on Ethics. Photo PIN POINT, Ga. — was here promoting his memoir a few years ago when he bumped into Algernon Varn, whose grandfather once ran a seafood cannery that employed Justice Thomas’s mother as a crab picker. 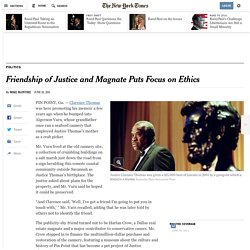 Mr. Varn lived at the old cannery site, a collection of crumbling buildings on a salt marsh just down the road from a sign heralding this remote coastal community outside Savannah as Justice Thomas’s birthplace. The justice asked about plans for the property, and Mr. Varn said he hoped it could be preserved. “And Clarence said, ‘Well, I’ve got a friend I’m going to put you in touch with,’ ” Mr.

The publicity-shy friend turned out to be Harlan Crow, a Dallas real estate magnate and a major contributor to conservative causes. The project throws a spotlight on an unusual, and ethically sensitive, friendship that appears to be markedly different from those of other justices on the nation’s highest court. Three questions for Clarence Thomas. A mystery to many, Clarence Thomas ruled against a key provision of the Voting Rights Act. 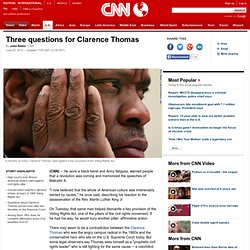 High court's lone African-American justice ruled against civil rights pillarConservative majority's decision strikes at heart of 1965 Voting Rights ActQuestions about Clarence Thomas persist even after two decades on the Supreme CourtAmong them: Why does he condemn affirmative action if he benefited from it? (CNN) -- He wore a black beret and Army fatigues, warned people that a revolution was coming and memorized the speeches of Malcolm X.