Everyday Feminism — Intersectional Feminism For Your Everyday Life. Racisme quotidien. White privilege. An Actual Answer to ‘Why Is She Dating a Masculine Woman Instead of Just Dating a Guy?’ Maybe you’ve heard it, been asked it, or wondered about it yourself: Why do queer women and lesbians date masculine-presenting women instead of just dating a cisgender dude? 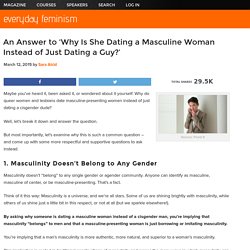 Well, let’s break it down and answer the question. But most importantly, let’s examine why this is such a common question – and come up with some more respectful and supportive questions to ask instead. 1. Masculinity Doesn’t Belong to Any Gender Masculinity doesn’t “belong” to any single gender or agender community. Colorblind Ideology Is a Form of Racism. 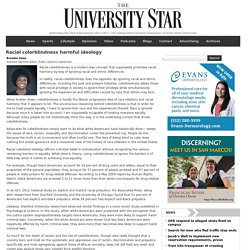 In reality, racial colorblindness does the opposite. By ignoring racial and ethnic differences, including the past and present histories, colorblindness allows those with racial privilege in society to ignore their privilege while simultaneously ignoring the experiences and difficulties caused by race that others may face. Colorblindness vs. Race-Consciousness. Consider the setting: a racially diverse urban neighborhood where organizers and most residents take a tremendous amount of pride in their community’s racial diversity. 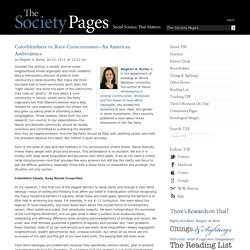 But many still think the black kids in their community don’t learn the “right values” and avoid the parts of the community they code as “ghetto.” Or how about a rural community in Illinois, where some Tea Party organizers feel that Obama’s election was a step forward for race relations, support the Dream Act, and grew up taking pride in attending a black congregation. Those realities, taken from my own research, run counter to our expectations—the liberal, pro-diversity community should be racially conscious and committed to sustaining the diversity that they so happily embrace. And the Tea Party should be filled with seething racists who hate the president because he’s black.

But neither is quite accurate. Intersectionality. Ethnicity vs Race. The traditional definition of race and ethnicity is related to biological and sociological factors respectively. 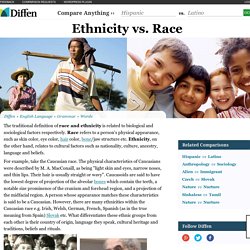 Race refers to a person's physical appearance, such as skin color, eye color, hair color, bone/jaw structure etc. Ethnicity, on the other hand, relates to cultural factors such as nationality, culture, ancestry, language and beliefs. For example, take the Caucasian race. The physical characteristics of Caucasians were described by M. A. Comparison chart. A Herstory of the #BlackLivesMatter Movement by Alicia Garza. By Alicia Garza I created #BlackLivesMatter with Patrisse Cullors and Opal Tometi, two of my sisters, as a call to action for Black people after 17-year-old Trayvon Martin was post-humously placed on trial for his own murder and the killer, George Zimmerman, was not held accountable for the crime he committed. 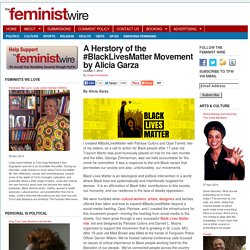 It was a response to the anti-Black racism that permeates our society and also, unfortunately, our movements. Black Lives Matter is an ideological and political intervention in a world where Black lives are systematically and intentionally targeted for demise. It is an affirmation of Black folks’ contributions to this society, our humanity, and our resilience in the face of deadly oppression. We were humbled when cultural workers, artists, designers and techies offered their labor and love to expand #BlackLivesMatter beyond a social media hashtag.

1 of 9 Black Children in U.S. Has a Parent in Prison. America’s growing prison population over the last several decades has resulted in more and more children growing up without a parent, most often a father being the one behind bars. 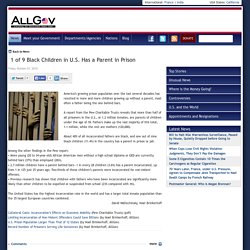 A report from the Pew Charitable Trusts reveals that more than half of all prisoners in the U.S., or 1.2 million inmates, are parents of children under the age of 18. Fathers make up the vast majority of this total, 1.1 million, while the rest are mothers (120,000). About 40% of all incarcerated fathers are black, and one out of nine black children (11.4%) in the country has a parent in prison or jail. Among the other findings in the Pew report: Race, Wealth, and Intergenerational Poverty. Despite an enormous and persistent black-white wealth gap, the ascendant American narrative is one that proclaims our society has transcended the racial divide. 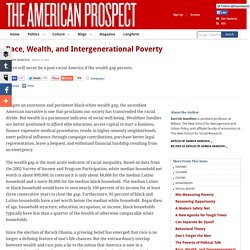 But wealth is a paramount indicator of social well-being. 18 Things White People Should Know/Do Before Discussing Racism. On Ferguson and 4 Ways We Can Choose to Divest from White Supremacy. Originally published on Change from Within and cross-posted here with their permission. 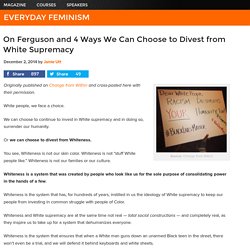 White people, we face a choice. We can choose to continue to invest in White supremacy and in doing so, surrender our humanity. Or we can choose to divest from Whiteness. You see, Whiteness is not our skin color. 17 things white people need to know about #YesAllBlackPeople. White people often say the darndest things when confronted with racism. 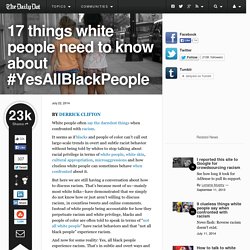 It seems as if blacks and people of color can’t call out large-scale trends in overt and subtle racist behavior without being told by whites to stop talking about racial privilege in terms of white people, white skin, cultural appropriation, microaggressions and how clueless white people can sometimes behave when confronted about it. But here we are still having a conversation about how to discuss racism. Colorblindness is the New Racism. On Friday, President Barack Obama, the first African-American president of the United States, delivered an unexpected and incredibly personal addition to the national conversation surrounding Trayvon Martin and race/racism in an American context. 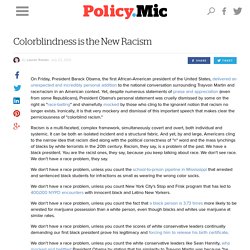 Yet, despite numerous statements of praise and appreciation (even from some Republicans), President Obama's personal statement was cruelly dismissed by some on the right as "race-baiting" and shamefully mocked by those who cling to the ignorant notion that racism no longer exists. Ironically, it is that very mockery and dismissal of this important speech that makes clear the perniciousness of "colorblind racism. " Racism is a multi-faceted, complex framework, simultaneously covert and overt, both individual and systemic. It can be both an isolated incident and a structural fabric. A Concise History Of Black-White Relations In The United States.

Funnel.sfsu.edu/students/luyilin/Courses/M420/Lu_Yilin/other/wgs/Crenshaw1991_intersectionality.pdf. 8 Things White People Really Need to Understand About Race. The educational strategies of the Black middle classes. Introduction. 7 Things Your Colorblind Racist Friend Might Say to You and How to Respond. 9 clueless things white people say when confronted with racism. Daring to talk about Iggy Azalea’s racism and cultural appropriation doesn’t make me a racist. But judging from the tens of thousands of Web comments, tweets and Facebook posts about the piece, “How to talk to white people about Iggy Azalea,” those of us who dare criticize appropriation in hip-hop are part of the problem for “making this about race” and halting society from true progress on racial equity.

Nothing could be further from the truth. "That's Racist Against White People!" A Discussion on Power and Privilege. Lately, I’ve been hearing a lot of White people screaming about racism. I wish these were anti-racist ally White people who were speaking about the prison industrial complex or about systems of privilege and oppression, but no. These are White folks who are claiming that the Obamacare tax on tanning beds is “racist” against White people.

These are White folks who are claiming that affirmative action is racist against them. These are the White folks who honestly believe they suffer more racism than people of Color. Millennials, racism, and MTV poll: Young people are confused about bias, prejudice, and racism.

Photo illustration by Slate. Photos by Shutterstock. When you hear MTV, you don’t think “research.” But, for the last few years, the music television channel has been building a public affairs campaign to address bias called “Look Different.” Aimed at millennials, it seeks to help them deal with prejudice and discrimination in their lives. And as part of the project, MTV has worked with pollsters to survey a nationally representative sample of people ages 14 to 24 to measure how young people are “experiencing, affected by, and responding to issues associated with bias.” Where Did That Fried Chicken Stereotype Come From? : Code Switch.

A Complete Guide to 'Hipster Racism'. Welcome to The Race Card Project! Send your six words on race. The Science of Why Cops Shoot Young Black Men. The Do’s and Don’ts of Being a Good Ally. Chris Rock: It's not black people who have progressed. It's white people. In New York magazine's November 2014 interview with Chris Rock, writer Frank Rich asked the comedian about issues ranging from the protests in Ferguson, Missouri, to Bill Cosby's rape allegations. 7 Actual Facts That Prove White Privilege Exists in America. Research shows that white Americans are less likely to be arrested and jailed. While people of color only make up 30% of the total population, they are 60% of the U.S. prison population. This discrepancy is particularly apparent when it comes to nonviolent drug offenses, where people of color are jailed at much higher rates, even though drug use in the white community is higher than in the African-American community.

10 Things NEVER to Say to a Black Coworker. 14 Companies to Avoid If You Support Equality in America. The midterm elections are right around the corner, presenting a perfect opportunity to exercise our right to vote — despite what Fox News might suggest. But as critical as casting ballots is to ensuring democracy and expanding equality, there is another important albeit often overlooked way that Americans can vote: with our wallets. Women in Parliaments: World Classification.