Monarchs and US Presidents

The History of the Illegitimate British Monarchy - The Hallett Report No. 3 - Lord Chancellor Greg Hallett - TheWorldOfTruth.net. Transcript from HALLETT REPORT NO. 3 True Crime Solving History Series Text from the movie above Transcript from the Interview on the 5th of November 2011 Lord Chancellor Greg Hallett, Jörn Jörn: Hello, my name is Jörn, and this is the first part of Chapter 2 of our interview together with author, historian and active history maker Greg Hallett from New Zealand. 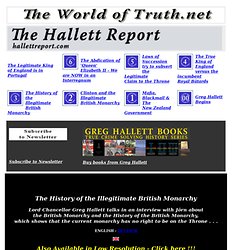 And in this chapter we are going to talk about the British Monarchy and the History of the British Monarchy. Lord Hallett, can you please tell us about the British Monarchy in general. Lord Chancellor Greg Hallett: Perhaps we should start with Queen Victoria being named ‘The Grandmother of Europe’ and her son King Edward VII being named ‘The Father of Europe’. So the conceptions for births that Queen Victoria did were done by Lionel Nathan Rothschild who was Nathan Mayer Rothschild’s son. Queen Victoria's and Prince Consort Albert's 9 children were all illegitimate, because Queen Victoria had never divorced her first husband. Illuminati III - Murdered by The Monarchs. Nurse who took prank call about royal Kate found dead - Entertainment - Celebrities. British royalty dined on human flesh (but don't worry it was 300 years ago) By Fiona Macrae Updated: 23:58 GMT, 20 May 2011 They have long been famed for their love of lavish banquets and rich recipes. 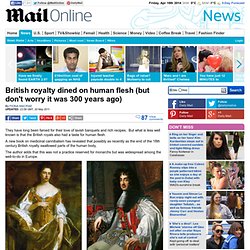 But what is less well known is that the British royals also had a taste for human flesh. A new book on medicinal cannibalism has revealed that possibly as recently as the end of the 18th century British royalty swallowed parts of the human body. The author adds that this was not a practice reserved for monarchs but was widespread among the well-to-do in Europe. Medicinal cannibalism: Both Queen Mary II and her uncle King Charles II both took distilled human skull on their deathbeds in 1698 and 1685 respectively, according to Dr Sugg Even as they denounced the barbaric cannibals of the New World, they applied, drank, or wore powdered Egyptian mummy, human fat, flesh, bone, blood, brains and skin.

Moss taken from the skulls of dead soldiers was even used as a cure for nosebleeds, according to Dr Richard Sugg at Durham University. True War Criminal Hillary Clinton Demonizing Syrian Leader For Defending His Own Country. LADY DIE - FULL Documentary. Jews Damaging their Economic Interests. By Sajjad Shaukat Since the September 11 tragedy, Israel and Jews who had overtly and covertly jumped on Bush’s anti-terrorism enterprise in order to targeting Pakistan, Iran and China in particular and other Islamic countries in general have been damaging their global economic interests by manipulating the US war on terror. 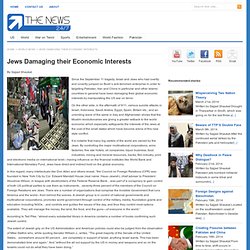 On the other side, in the aftermath of 9/11, various suicide attacks in Israel, Indonesia, Saudi Arabia, Egypt, Spain, Britain etc., and an unending wave of the same in Iraq and Afghanistan shows that the Muslim revolutionaries are giving a greater setback to the world economic which especially safeguards the interests of the Jews at the cost of the small states which have become arena of this new style conflict. It is notable that many big cartels of the world are owned by the Jews. In this regard, many intellectuals like Don Allen and others reveal, “the Council on Foreign Relations (CFR) was founded in New York City by Col.

Email: sajjad_logic@yahoo.com. David Icke The Murder of Princess Diana The Truth About The Royal Family. QADDAFI - TELLING YOU HOW IT IS............ LISTEN PEOPLE OF EARTH. Bush family pedophilia crimes. Secrets of the CIA. Obama pre picked by New World Order. The men behind Barack Obama part 1. The men behind Barack Obama part 2. How the ILLUMINATI made Obama President 1/9. Israeli billionaire Saban biggest donor to US politicians - Israel Business, Ynetnews. Communications tycoon has donated at least USD 13 million to American politicians. 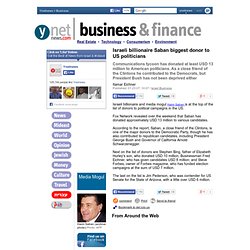 As a close friend of the Clintons he contributed to the Democrats, but President Bush has not been deprived either Israeli billionaire and media mogul Haim Saban is at the top of the list of donors to political campaigns in the US. Fox Network revealed over the weekend that Saban has donated approximately USD 13 million to various candidates.

According to the report, Saban, a close friend of the Clintons, is one of the major donors to the Democratic Party, though he has also contributed to republican candidates, including President George Bush and Governor of California Arnold Schwarzenegger. Next on the list of donors are Stephen Bing, father of Elizabeth Hurley's son, who donated USD 10 million; Businessman Fred Eichner, who has given candidates USD 8 million; and Steve Forbes, owner of Forbes magazine, who has funded election campaigns at the sum of USD 7 million. ILLUMINATI PROJECT part 114. One Family, One Bloodline, One Rule. OBAMA Strong Words To CHINA (Did He Just Declare WW3) Illuminati III - Murdered by The Monarchs.