Hygiene, infection and STI's and HPV 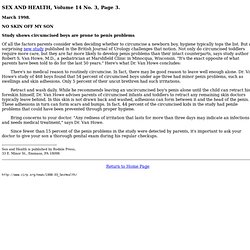 March 1998. Study shows circumcised boys are prone to penis problems Of all the factors parents consider when deciding whether to circumcise a newborn boy, hygiene typically tops the list. But a surprising new study published in the British Journal of Urology challenges that notion. Cleanse Your Children! A Parody. By Guggie Daly Read more from Daly at The Guggie Daily Thank you to Michelle Richardson for bringing this link up in our intactivist discussion. 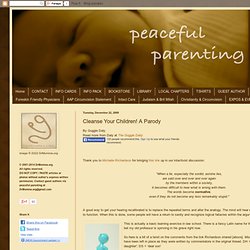 "When a lie, especially the sordid, asinine lies, are said over and over and over again by the members within a society, it becomes difficult to hear what is wrong with them. The words become normative, even if they do not become any less remarkably stupid. " Sexually Transmitted Infections and Male Circumcision: A Systematic Review and Meta-Analysis. Silly pro-circ arguments 1 - "infection" Circumcision Does Not Prevent HPV Infection, RCT Data 'Inflated,' Study Finds. Researchers at the University of Washington find no relation between circumcision status and HPV infections, and that high HPV infection sites are ignored in previous studies, leading to false claims of the protection benefits of circumcision. 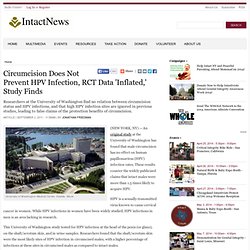 University of Washington Medical Center, Seattle, Wash. (NEW YORK, NY) — An original study at the University of Washington has found that male circumcision has no effect on human papillomavirus (HPV) infection rates. These results counter the widely publicized claims that intact males were more than 1.5 times likely to acquire HPV. HPV is a sexually-transmitted virus known to cause cervical cancer in women. While HPV infections in women have been widely studied, HPV infections in men is an area lacking in research. This University of Washington study tested for HPV infection at the head of the penis (or glans), on the shaft/scrotum skin, and in urine samples. About the Author. News in depth. News in brief is useful, but sometimes you want to know more. 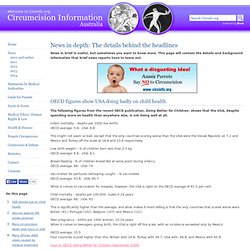 This page will contain the details and background information that brief news reports have to leave out. OECD figures show USA doing badly on child health The following figures from the recent OECD publication, Doing Better for Children, shows that the USA, despite spending more on health than anywhere else, is not doing well at all. Infant mortality – deaths per 1000 live births OECD average: 5.4; USA: 6.8 This might not seem so bad, except that the only countries scoring worse than the USA were the Slovak Republic on 7.2 and Mexico and Turkey off the scale at 18.8 and 23.6 respectively. Massive Infection Takes Over Body After Circumcision.

This pediatric urology crisis occurred after a routine circumcision as a result of the Plastibell method -- one which some advertise as being 'less traumatic' than other methods of genital cutting. 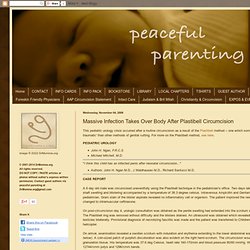 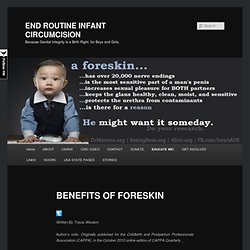 Introduction There are an increasing number of American parents who are saying “no” to routine circumcision. This positive choice gives boys increased health and lifetime benefits. While the circumcision rates continue to decline in the United States, those who choose “foreskin-friendly” parenting find themselves in contrast of the greater circumcising culture. Adolescent Sexual Health in Europe & the U.S.—Why the Difference? Advocates for Youth compares sexually transmitted infection (STI) rates of the United States to rates found in France, Germany and the Netherlands. 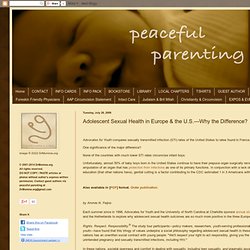 One significance of the major difference? None of the countries with much lower STI rates circumcise infant boys. Unfortunately, almost 50% of baby boys born in the United States continue to have their prepuce organ surgically removed at birth. More than foreskin: circumcision status - PubMed Mobile. More than Foreskin: Circumcision Status, History of HIV/STI, and Sexual Risk in a Clinic-Based Sample of Men in Puerto Rico - Rodriguez-Diaz - 2012 - The Journal of Sexual Medicine. 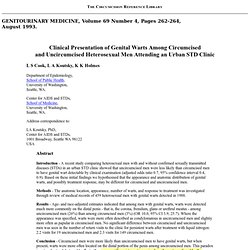 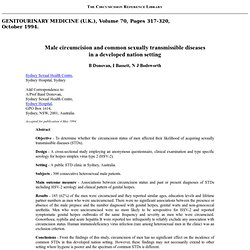 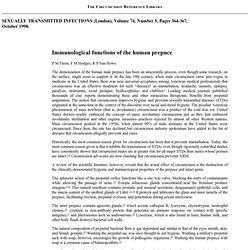 How the Foreskin Protects Against UTI (urinary tract infection) Research cataloged by the National Organization of Circumcision Information Resource Centers the human urinary tract Male and female urinary tracts are similar except for the shorter urethra in females, which leads to a higher rate of UTI (urinary tract infection) among baby girls, female children, and adult women. Intact boys and men contract UTIs to a much lesser degree than girls and women. Cervical cancer. Prevention of cervical cancer in women is one of the oldest of the traditional medical motivations for circumcision of boys. The idea emerged in the early twentieth century, when circumcision was being widely hailed as the magic bullet against just about every disease and problem affecting the genital areas.

The evidence was much the same as the evidence that circumcised men did not get syphilis: observations showed that Jewish women (whose husbands were of course circumcised) had a much lower incidence of cervical cancer than others. Stealing Foreskins: The Science of Skin Grafting. If you think that the prepuce organ ('foreskin') forcibly amputated from newborn baby boys during circumcision surgeries in the United States (and to a much lesser degree, those in Canada) is being tossed into the trash - you may want to think twice. One of the factors driving the continuation of prepuce amputation of approximately 32% of boys born in the U.S. (9% born in Canada) is that these very valuable organs encompass a great deal of healing factors (both for the boy they belong to AND for those who use the prepuce when it is stolen from him).

Foreskins are a valuable commodity, worth a great deal as they are more useful than almost any other body organ. They are commonly sold by hospitals for research, medical, and cosmetic use. It is shocking that Dr. James McGuire brags to CNN about just how valuable a newborn baby foreskin is to skin graft patients...without ever addressing the violence behind where it came from.

The Foreskins in Oprah's Facecream. I've had a lot of questions passed my way recently as to the controversial cosmetic products that Oprah has used/advertised which are derived from the foreskins of circumcised baby boys. "Does Oprah KNOW about this?!?! " Balanitis - Posthitis - Balanoposthitis. Efficient production of human bivalent and trivalent anti-MUC1 Fab-scFv antibodies in Pichia pastoris.