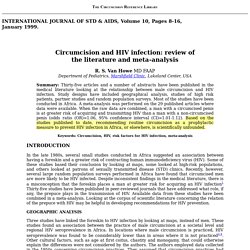 Study designs have included geographical analysis, studies of high risk patients, partner studies and random population surveys. Most of the studies have been conducted in Africa. A meta-analysis was performed on the 29 published articles where data were available. When the raw data are combined, a man with a circumcised penis is at greater risk of acquiring and transmitting HIV than a man with a non-circumcised penis (odds ratio (OR)=1.06, 95% confidence interval (CI)=1.01-1.12). Based on the studies published to date, recommending routine circumcision as a prophylactic measure to prevent HIV infection in Africa, or elsewhere, is scientifically unfounded. FGM, circumcision "likely to spread HIV" Africa Gender - Women | Health | Science - EducationFGM, circumcision "likely to spread HIV" afrol News, 26 February - New research dramatically contradicts the popular conclusions of recently published reports, holding that male circumcision protects against contracting AIDS. 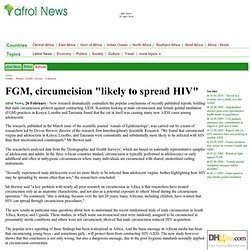 Scientists looking at male circumcision and female genital mutilation (FGM) practices in Kenya, Lesotho and Tanzania found that the cut in itself was causing many new AIDS cases among adolescents. The research, published in the March issue of the scientific journal 'Annals of Epidemiology', was carried out by a team of researchers led by Devon Brewer, director of the research firm Interdisciplinary Scientific Research. "We found that circumcised virgins and adolescents in Kenya, Lesotho, and Tanzania were consistently and substantially more likely to be infected with HIV than their uncircumcised counterparts," Mr Brewer said.

The popular news reporting of these findings has been widespread in Africa. . © afrol News. And HIV. Behavioral factors are far more important risk factors than circumcision status. 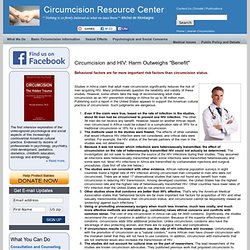 Studies in Africa claim that adult male circumcision significantly reduces the risk of men acquiring HIV. Many professionals question the reliability and validity of these studies. Scarification And Male Circumcision Associated With HIV Infection In Mozambican Children And Youth. Langerhans cells limit HIV invasion. Published March 26, 2007 // JCB vol. 177 no. 1 5a The Rockefeller University Press, doi: 10.1083/jcb.1771rr5 © 2007 Rockefeller University Press News Research Roundup Asuspected entry route for HIV turns out to be a dead-end, report Lot de Witte, Teunis Geijtenbeek (VU University Medical Centre, Amsterdam, Netherlands), and colleagues. Langerhans cells, rather than transmitting the virus to T cells, trap HIV-1 and thus act as a barrier to infection. Circumcision and HIV clinical trials. In this paper, French demographer and reproductive health expert Michel Garenne shows why circumcision as an HIV preventive is unlikely to be as effective in real world situations as it appears to be in the artificial conditions of those famous clinical trials. 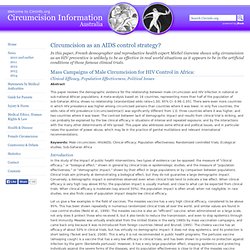 Clinical Efficacy, Population Effectiveness, Political Issues Abstract This paper reviews the demographic evidence for the relationship between male circumcision and HIV infection in national or sub-national African populations. A meta-analysis based on 18 countries, representing more than half of the population of sub-Saharan Africa, shows no relationship [standardized odds ratio=1.00; 95% CI: 0.96–1.05]. Circumcision and AIDS prevention. … shows that foreskin not the problem and circumcision not the answer Reports from the United States and several African countries show that, despite the WHO push for circumcision as the key strategy against AIDS in underdeveloped countries, HIV infection rates are increasing rapidly among circumcised populations. 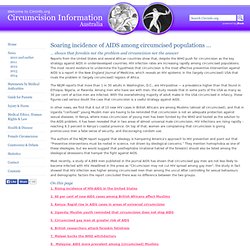 The most recent evidence to undermine the hypothesis that circumcision is the most effective preventive intervention against AIDS is a report in the New England Journal of Medicine, which reveals an HIV epidemic in the (largely circumcised) USA that rivals the problem in (largely circumcised) regions of Africa. The NEJM reports that more than 1 in 30 adults in Washington, D.C., are HIV-positive — a prevalence higher than that found in Ethiopia, Nigeria, or Rwanda. Among men who have sex with men, the study reveals that in some parts of the USA as many as 30 per cent of active men are infected. On this page 1. Circumcision, HIV and condoms. For all the poorly thought out chit-chat and media hoo-hah about circumcision, the real magic bullet against HIV-AIDS is the same as it has always been: restraint, fidelity, safe-sex and condom use. 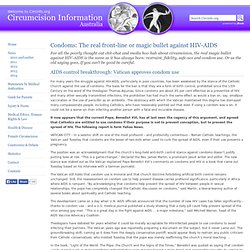 Or as the old saying goes, If you can't be good be careful. AIDS control breakthrough: Vatican approves condom use For many years the struggle against HIV-AIDS, particularly in poor countries, has been weakened by the stance of the Catholic Church against the use of condoms. The basis for the ban is that they are a form of birth control, prohibited since the 13th Century on the word of the theologian Thomas Aquinas. Since condoms are about 95 per cent effective as a preventive of HIV and many other sexually transmitted infections, the prohibition has had much the same effect as would a ban on, say, smallpox vaccination or the use of penicillin as an antibiotic.

The Vatican still holds that condom use is immoral and that church doctrine forbidding artificial birth control remains unchanged. No Correlation - GlobalGayz. By Richard Ammon GlobalGayz.com March 23, 2011 In 2009 I wrote a blog about male circumcision and HIV in which I doubted the usefulness of removing the male foreskin to prevent or reduce HIV infection. 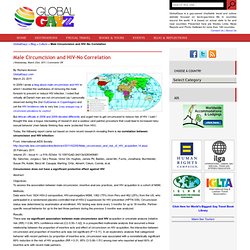 I noted that virtually all Danish men are not circumcised (as I personally observed during the 2nd OutGames in Copenhagen) and yet the HIV incidence rate is very low. (view enlarged map of circumcision prevalence by country) But African officials in 2008 and 2009 decided differently and urged men to get circumcised to reduce risk of HIV. Today, the following report came out based on more recent research revealing there is no correlation between circumcision and HIV infection: 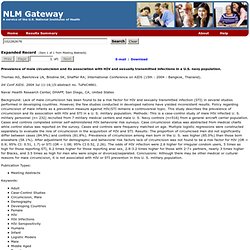 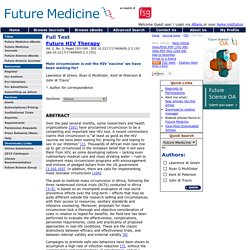 It is beyond the scope of this paper to analyze these studies in depth. However, the world health community must examine the methodology and results of these studies much more carefully than it has done so far. Given that these studies are now being used to promote circumcision of millions of males, it is worth examining several other factors that might have influenced and skewed the results: Early termination There is no way to know if the short-term results of the trials would have continued. Participant loss Nonsexual transmission Conflicting results Sex workers. The Use of Male Circumcision to Prevent HIV Infection. The Use of Male Circumcision to Prevent HIV Infection A statement by Doctors Opposing Circumcision Introduction. 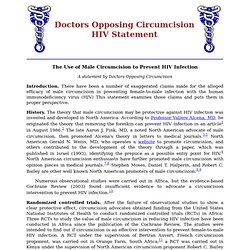 There have been a number of exaggerated claims made for the alleged efficacy of male circumcision in preventing female-to-male infection with the human immunodeficiency virus (HIV) This statement examines those claims and puts them in proper perspective. History. Circumcision & AIDS ~ Norm Cohen Speaks.