6 Movies That Predicted Disasters With Eerie Accuracy. Do you remember how, after 9/11, people started digging up all sorts of movies, shows and photos that "predicted" the attacks (like the TV show that featured an almost identical terror plot a year ahead of time)? If you're one of the creators, you have to hate that -- your lighthearted bit of entertainment now just winds up reminding people of something awful that happened years later. Especially when websites like this one keep bringing them up.

We can't help it; this stuff is freaking creepy ... #6. Game of Death Predicts the Death of Brandon Lee Famous crazy-eyed screamer Bruce Lee starred in an action movie in 1978 called Game of Death, which wouldn't have been strange if Lee hadn't died five years earlier. The weirdest thing is when he sits up and roundhouses the funeral director. In the movie, Bruce Lee is playing an actor shooting a movie. What's so disturbing about that? And not in a vat of toxic chemicals, as his face seems to suggest. #5. It says "1988 Super Bowl XXII. " So what? 5 Insane Celebrity Conspiracy Theories (That Make Sense) We try not to be celebrity-obsessed here at Cracked; we don't know whether Brad Pitt and Angelina Jolie are still married, we don't know which leading men are secretly gay and we have no idea why OJ doesn't make hilarious spoof movies anymore. 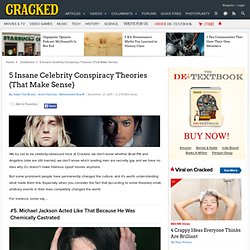 But some prominent people have permanently changed the culture, and it's worth understanding what made them tick. Especially when you consider the fact that (according to some theories) small, arbitrary events in their lives completely changed the world. For instance, some say ... #5. Michael Jackson Acted Like That Because He Was Chemically Castrated For those of you who only knew Michael Jackson as the washed up, deformed, crazy pedophile with his own amusement park, you should know that at one time he was the most famous entertainer in the world. 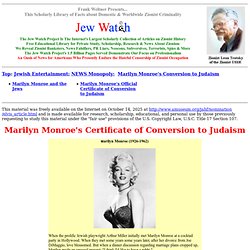 When they met some years some years later, after her divorce from Joe DiMaggio, love blossomed. But when a dinner discussion regarding marriage plans cropped up, Marilyn made an unusual request: "I think I'd like to have a rabbi. " Thus, Marilyn converted in June of 1956, flanked by Rabbi Robert Goldberg, Miller, and his family.

She even got a musical menorah that played Hatikvah as a gift. According to The Jewish Times of Brookline, Massachusetts: "Is it of your own free will that you seek admittance into the Jewish fold? " On June 29th, 1956 she married Arthur Miller. Untitled. Zionist, Jew, ADL, Israel, 911, Schooling Media. Top: Jewish Entertainment: NEWS Monopoly:Rupert Murdoch: Rupert Murdoch's Hidden Jewish Roots The information archived below was found at on October 22, 2005 and is made available here for scholarly, research, educational, and personal use under "fair use" regulations as legislated in Title 171 of the copyright law. 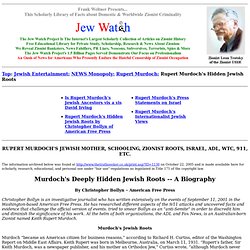 By Christopher Bollyn – American Free Press Christopher Bollyn is an investigative journalist who has written extensively on the events of September 11, 2001 in the Washington-based American Free Press. He has researched different aspects of the 9/11 attacks and uncovered facts and evidence that challenge the official version of events. tried to smear Bollyn as an “anti-Semite” in order to discredit him and diminish the significance of his work. At the helm of both organizations, the ADL and Fox News, is an Australian-born Zionist named Keith Rupert Murdoch. Murdoch's Jewish Roots Murdoch “became an American citizen for business reasons,” according to Richard H.

Related:  Silent Depopulation   -  You Should Know This   -  Education   -  Enterprise