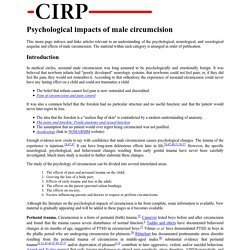 The material within each category is arranged in order of publication. Introduction In medical circles, neonatal male circumcision was long assumed to be psychologically and emotionally benign. It was believed that newborn infants had "poorly developed" neurologic systems; that newborns could not feel pain; or, if they did feel the pain, they would not remember it. According to that orthodoxy, the experience of neonatal circumcision could never have any lasting effect on a child and could not traumatize a child. SICSOCIETY - An Article about Brain Visualization & Circumcision. Psychological 1. The psychological damage caused to neonates and pre pubescent boys seems to have been researched and documented to some extent. 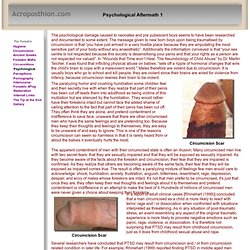 The message given to new born boys upon being traumatised by circumcision is that “you have just arrived in a very hostile place because they are amputating the most sensitive part of your body without any anaesthetic”. Additionally the information conveyed is that “your sex centre is not respected because this society is desensitising your penis and that your rights as a person are not respected nor valued”. In “Wounds that Time won’t Heal: The Neurobiology of Child Abuse” by Dr. Martin Teicher, it was found that inflicting physical abuse on babies, “sets off a ripple of hormonal changes that wire the child's brain to cope with a malevolent world.

" Males therefore are violent due to circumcision. Psychological Aftermath 1 Psychological The apparent contentment of men with their circumcised state is often an illusion. Babies Remember Circumcision Pain. This data is old, but for some reason we are still forgetting that it is nonetheless very TRUE for our babies born today. 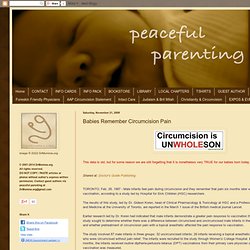 Shared at: Doctor's Guide Publishing TORONTO, Feb. 28, 1997 - Male infants feel pain during circumcision and they remember that pain six months later when they receive their routine vaccination, according to a study led by Hospital for Sick Children (HSC) researchers. The results of this study, led by Dr. Gideon Koren, head of Clinical Pharmacology & Toxicology at HSC and a Professor of Pediatrics, Pharmacology, and Medicine at the University of Toronto, are reported in the March 1 issue of the British medical journal Lancet. Earlier research led by Dr. The study involved 87 male infants in three groups: 32 uncircumcised infants; 29 infants receiving a topical anesthetic prior to circumcision; and 26 who were circumcised without pain relief.

"What we discovered was that the infants who were uncircumcised demonstrated the least pain during vaccination," Dr. Male circumcision trauma and brain damage. Brain Damage from Circumcision. SOCIAL BIOLOGY, Volume 44, Pages 265-275, Fall-Winter 1997. 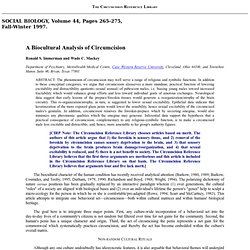 The goal here is to integrate three major points. Although any one culture undoubtedly has idiosyncratic features, it is also arguable that behavioral themes will undergird the various cultures around the world (see Harris, 1974, 1979, for examples and theoretical discussion). Circumcision Trauma Brain Injury Attorney Info. By westvirginia on Wednesday, May 25th, 2011 | 25 Comments David Chamberlain Ph.D. of the Association for Pre and Perinatal Psychology and Health and James W. 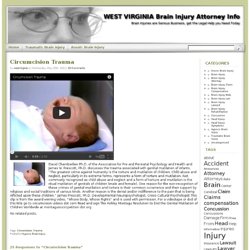 Prescott, Ph.D. discusses the trauma associated with genital mutilation of infants. “The greatest crime against humanity is the torture and mutilation of children. MRI Studies: The Brain Permanently Altered From Infant Circumcision. Two of my physics professors at Queen's University (Dr. 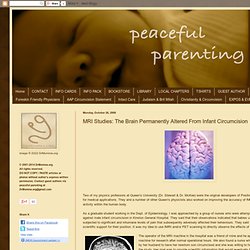 Stewart & Dr. McKee) were the original developers of Positron Emission Tomography (PET) for medical applications. They and a number of other Queen's physicists also worked on improving the accuracy of fMRI for observing metabolic activity within the human body. As a graduate student working in the Dept. of Epidemiology, I was approached by a group of nurses who were attempting to organize a protest against male infant circumcision in Kinston General Hospital.

They said that their observations indicated that babies undergoing the procedure were subjected to significant and inhumane levels of pain that subsequently adversely affected their behaviours. The operator of the MRI machine in the hospital was a friend of mine and he agreed to allow us to use the machine for research after normal operational hours. We tightly strapped an infant to a traditional plastic "circumrestraint" using Velcro restraints.