Stimulant. Phenethylamine. Occurrence[edit] Phenethylamine is widely distributed throughout the plant kingdom.[5] Chemistry[edit] Synthesis[edit] One method for preparing β-phenethylamine, set forth in J. 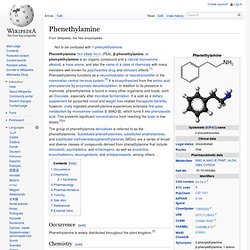 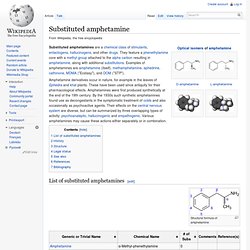 They feature a phenethylamine core with a methyl group attached to the alpha carbon resulting in amphetamine, along with additional substitutions. Examples of amphetamines are amphetamine (itself), methamphetamine, ephedrine, cathinone, MDMA ("Ecstasy"), and DOM ("STP"). List of substituted amphetamines[edit] Dimethoxyamphetamine. Adderall. While concerns have been raised over side effects and rare, serious complications, Adderall is generally well-tolerated and effective.[3] The most common side effects are cardiovascular, such as fast or irregular heartbeat, and psychological, such as anxiety. 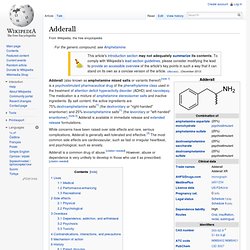 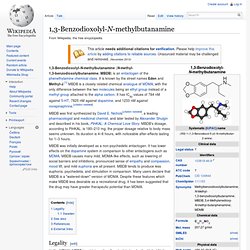 It is known by the street names Eden and Methyl-J.[1] MBDB is a closely related chemical analogue of MDMA, with the only difference between the two molecules being an ethyl group instead of a methyl group attached to the alpha carbon. EDMA. Methylenedioxyethylamphetamine. MDEA (3,4-methylenedioxy-N-ethylamphetamine; MDE, "Eve") is a psychedelic and entactogenic drug of the phenethylamine and amphetamine chemical classes. 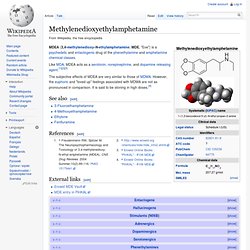 Like MDA, MDEA acts as a serotonin, norepinephrine, and dopamine releasing agent.[1][2][3] 94. MDMA. MDMA (3,4-methylenedioxy-N-methylamphetamine) is an empathogenic drug of the phenethylamine and amphetamine classes of drugs. 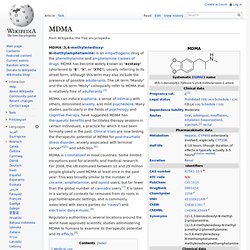 MDMA has become widely known as "ecstasy" (shortened to "E", "X", or "XTC"), usually referring to its street form, although this term may also include the presence of possible adulterants. The UK term "Mandy" and the US term "Molly" colloquially refer to MDMA that is relatively free of adulterants.[3] MDMA can induce euphoria, a sense of intimacy with others, diminished anxiety, and mild psychedelia. Many studies, particularly in the fields of psychology and cognitive therapy, have suggested MDMA has therapeutic benefits and facilitates therapy sessions in certain individuals, a practice for which it had been formally used in the past. Clinical trials are now testing the therapeutic potential of MDMA for post-traumatic stress disorder, anxiety associated with terminal cancer[4][5] and addiction.[6]

3,4-Methylenedioxyamphetamine. Medical use[edit] There are no currently accepted medical uses for MDA. 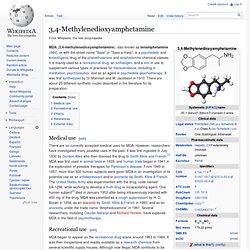 However, researchers have investigated many possible uses in the past. Methcathinone. Methcathinone (α-methylamino-propiophenone or ephedrone) (sometimes called "cat" or "jeff") is a monoamine alkaloid and psychoactive stimulant, a substituted cathinone. 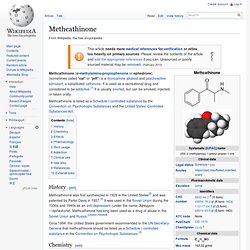 It is used as a recreational drug and considered to be addictive.[1] It is usually snorted, but can be smoked, injected, or taken orally. Methcathinone is listed as a Schedule I controlled substance by the Convention on Psychotropic Substances and the United States' Controlled Substances Act. History[edit] Methcathinone was first synthesized in 1928 in the United States[2] and was patented by Parke Davis in 1957.[3] It was used in the Soviet Union during the 1930s and 1940s as an anti-depressant (under the name Эфедрон—ephedrone). Methcathinone has long been used as a drug of abuse in the Soviet Union and Russia. Circa 1994, the United States government recommended to the UN Secretary-General that methcathinone should be listed as a Schedule I controlled substance in the Convention on Psychotropic Substances.[4]

Cathinone. Cathinone /ˈkæθɨnoʊn/, benzoylethanamine, or β-ketone-amphetamine also known as hagigat (Hebrew: חגיגת‎) in Israel,[2] is a monoamine alkaloid found in the shrub Catha edulis (khat) and is chemically similar to ephedrine, cathine, methcathinone and other amphetamines. 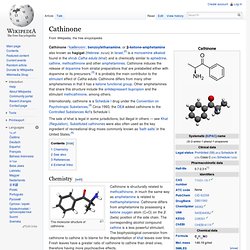 Cathinone induces the release of dopamine from striatal preparations that are prelabelled either with dopamine or its precursors.[3] It is probably the main contributor to the stimulant effect of Catha edulis. Cathinone differs from many other amphetamines in that it has a ketone functional group. Other amphetamines that share this structure include the antidepressant bupropion and the stimulant methcathinone, among others. Internationally, cathinone is a Schedule I drug under the Convention on Psychotropic Substances.[4] Circa 1993, the DEA added cathinone to the Controlled Substances Act's Schedule I. Dextroamphetamine. Dextroamphetamine (USAN), Dexamphetamine (AAN)[8][9] and Dexamfetamine (INN and BAN) is a potent psychostimulant and amphetamine stereoisomer prescribed for the treatment of attention deficit-hyperactivity disorder (ADHD) in children and adults as well as for a sleep disorder known as narcolepsy. 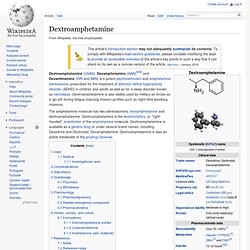 The herb má huáng (麻黄, Ephedra sinica), used in traditional Chinese medicine, contains ephedrine and pseudoephedrine as its principal active constituents. The same may be true of other herbal products containing extracts from other Ephedra species. Methamphetamine. Methamphetamine[note 1] (pronunciation: /ˌmɛθæmˈfɛtəmiːn/; contracted from N-methyl-alpha-methylphenethylamine) is a neurotoxin and potent psychostimulant of the phenethylamine and amphetamine classes that is used to treat attention deficit hyperactivity disorder (ADHD) and obesity.

Methamphetamine exists as two enantiomers, dextrorotary and levorotary. [note 2] Dextromethamphetamine is a stronger central nervous system (CNS) stimulant than levomethamphetamine; however, both are addictive and produce the same toxicity symptoms at high doses. Although rarely prescribed due to the potential risks, methamphetamine hydrochloride is approved by the United States Food and Drug Administration (USFDA) under the trade name Desoxyn. Recreationally, methamphetamine is used to increase sexual desire, lift the mood, and increase energy, allowing some users to engage in sexual activity continuously for several days straight. Uses Medical Recreational. Amphetamine.

Pseudoephedrine. Pseudoephedrine (/ˌsjuːdoʊ.ɨˈfɛdrɪn/ or /ˌsjuːdoʊˈɛfɨdriːn/; PSE) is a sympathomimetic drug of the phenethylamine and amphetamine chemical classes. It may be used as a nasal/sinus decongestant, as a stimulant,[2] or as a wakefulness-promoting agent.[3] Chemistry[edit] Nicotine. In smaller doses (an average cigarette yields about 1 mg of absorbed nicotine), the substance acts as a stimulant in mammals, while high amounts (50–100 mg) can be harmful.[5][6][7] This stimulant effect is likely to be a major contributing factor to the dependence-forming properties of tobacco smoking, nicotine patches, nicotine gum, nicotine inhalers and liquid nicotine vaporizers. Caffeine. Caffeine is a central nervous system (CNS) stimulant of the methylxanthine class.[10] It is the world's most widely consumed psychoactive drug. Unlike many other psychoactive substances, it is legal and unregulated in nearly all parts of the world.

There are several known mechanisms of action to explain the effects of caffeine. The most prominent is that it reversibly blocks the action of adenosine on its receptor and consequently prevents the onset of drowsiness induced by adenosine. Caffeine also stimulates certain portions of the autonomic nervous system. Cocaine. Cocaine (INN) (benzoylmethylecgonine, an ecgonine derivative) is a crystalline tropane alkaloid that is obtained from the leaves of the coca plant.[5] The name comes from "coca" and the alkaloid suffix "-ine", forming "cocaine".

Crack cocaine. Crack cocaine ‘rocks’. Methylphenidate. Modafinil. Provigil (Modafinil) Drug Information: Clinical Pharmacology. Mechanism of Action and Pharmacology. Effect of pharmacological enhancement on the cognit... [Ann Surg. 2012. Modafinil Occupies Dopamine and Norepinephrine Transporters in Vivo and Modulates the Transporters and Trace Amine Activity in Vitro. Adrafinil. Adrafinil is a prodrug; it is primarily metabolized in vivo to modafinil, resulting in nearly identical pharmacological effects. Unlike modafinil, however, it takes time for the metabolite to accumulate to active levels in the bloodstream. Effects usually are apparent within 45–60 minutes when taken orally on an empty stomach. Adrafinil does not currently have FDA approval and is thus unregulated in the United States. It was marketed in France and elsewhere in Europe under the trade name Olmifon until September 2011 when France's FDA equivalent reassessed the drug and withdrew marketing permission.[1] History[edit] Adrafinil was discovered in the late 1970s by scientists working with the French pharmaceutical company Group Lafon.

As of September 2011, Cephalon has discontinued the Olmifon product.[1] Armodafinil. Although they have similar half lives, armodafinil reaches its peak concentration in the blood later after administration than modafinil does, which may make it more effective at improving wakefulness in patients with excessive daytime sleepiness.[5] Ampakine. CX614. CX-546. CX-516. Racetam. Farampator. CX717. CX717. CX717. LY-404,187. LY-503,430. IDRA-21. Yohimbine.