Anxiolytic. An anxiolytic (also antipanic or antianxiety agent)[1] is a medication or other intervention that inhibits anxiety. 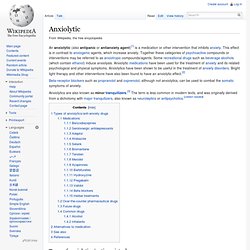 This effect is in contrast to anxiogenic agents, which increase anxiety. Together these categories of psychoactive compounds or interventions may be referred to as anxiotropic compounds/agents. Some recreational drugs such as beverage alcohols (which contain ethanol) induce anxiolysis. Anxiolytic medications have been used for the treatment of anxiety and its related psychological and physical symptoms.

Anxiolytics have been shown to be useful in the treatment of anxiety disorders. Beta-receptor blockers such as propranolol and oxprenolol, although not anxiolytics, can be used to combat the somatic symptoms of anxiety. Azapirone. Zalospirone. Tandospirone. Tandospirone (Sediel), also known as metanopirone, is an anxiolytic and antidepressant used in China and Japan, where it is marketed by Dainippon Sumitomo Pharma. 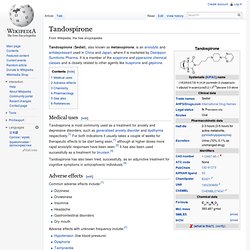 It is a member of the azapirone and piperazine chemical classes and is closely related to other agents like buspirone and gepirone. Gepirone. Gepirone was originally developed by Bristol-Myers Squibb, but was out-licensed to Fabre-Kramer in 1993. 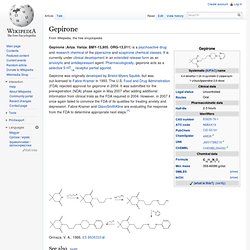 The U.S. Food and Drug Administration (FDA) rejected approval for gepirone in 2004. It was submitted for the preregistration (NDA) phase again in May 2007 after adding additional information from clinical trials as the FDA required in 2004. However, in 2007 it once again failed to convince the FDA of its qualities for treating anxiety and depression. Fabre-Kramer and GlaxoSmithKline are evaluating the response from the FDA to determine appropriate next steps.[1] Ormaza, V. Eptapirone. Eptapirone and its relatives such as F-13,640 and F-15,599 were developed under the notion that high receptor-activating efficacy is required for the maximal therapeutic benefits of 5-HT1A receptor agonists to be realized, underlying the poor clinical effectiveness of currently marketed agents like buspirone and tandospirone which act as mere weak-moderate partial agonists.[1][2][3][4] 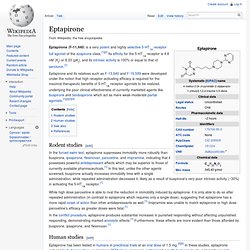 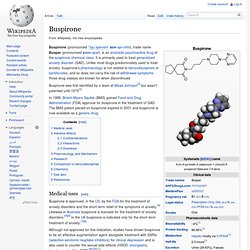 It is primarily used to treat generalized anxiety disorder (GAD). Unlike most drugs predominately used to treat anxiety, buspirone's pharmacology is not related to benzodiazepines or barbiturates, and so does not carry the risk of withdrawal symptoms those drug classes are known for when discontinued. Alnespirone. Alnespirone (S-20,499) is a selective 5-HT1A receptor full agonist of the azapirone chemical class.[1][2][3] It has antidepressant and anxiolytic effects.[1] See also[edit] References[edit] ^ Jump up to: a b Griebel G, Misslin R, Pawlowski M, Guardiola Lemaître B, Guillaumet G, Bizot-Espiard J. (1992). 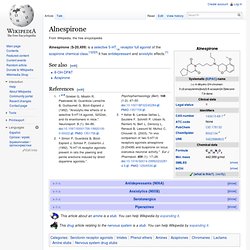 Pregabalin. Pregabalin is marketed by Pfizer under the trade name Lyrica. 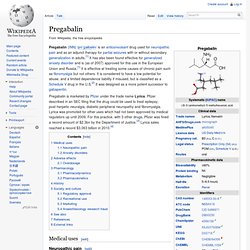 Pfizer described in an SEC filing that the drug could be used to treat epilepsy, post-herpetic neuralgia, diabetic peripheral neuropathy and fibromyalgia. Lyrica was promoted for other uses which had not been approved by medical regulators up until 2009. For this practice, with 3 other drugs, Pfizer was fined a record amount of $2.3bn by the Department of Justice.[3] Lyrica sales reached a record $3.063 billion in 2010.[4] Medical uses[edit] Neuropathic pain[edit] A package of 150 mg pregabalin (Finland) Venlafaxine. Medical uses[edit] Venlafaxine is used primarily for the treatment of depression, general anxiety disorder, social phobia, panic disorder and vasomotor symptoms.[7] At low doses (<150 mg/day), it acts only on serotonergic transmission. 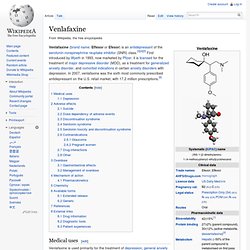 At moderate doses (>150 mg/day), it acts on serotonergic and noradrenergic systems, whereas at high doses (>300 mg/day), it also affects dopaminergic neurotransmission.[8] Many doctors are starting to prescribe venlafaxine "off label" for the treatment of diabetic neuropathy (in a similar manner to duloxetine) and migraine prophylaxis (in some people, however, venlafaxine can exacerbate or cause migraines). Studies have shown venlafaxine's effectiveness for these conditions.[9][10] It has also been found to reduce the severity of 'hot flushes' in menopausal women and men on hormonal therapy for the treatment of prostate cancer.[11][12]

Hydroxyzine. Hydroxyzine (/haɪˈdrɒksɨziːn/; sold as Vistaril, Atarax) is a first-generation antihistamine of the diphenylmethane and piperazine class. 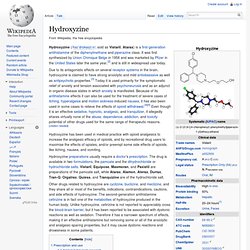 It was first synthesized by Union Chimique Belge in 1956 and was marketed by Pfizer in the United States later the same year,[2] and is still in widespread use today. Due to its antagonistic effects on several receptor systems in the brain, hydroxyzine is claimed to have strong anxiolytic and mild antiobsessive as well as antipsychotic properties.[3] Today it is used primarily for the symptomatic relief of anxiety and tension associated with psychoneurosis and as an adjunct in organic disease states in which anxiety is manifested. Meclozine. Meclizine (INN,[1] or meclozine) is an antihistamine considered to be an antiemetic. 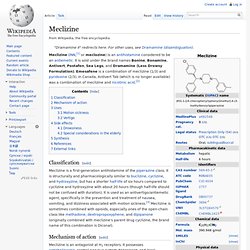 It is sold under the brand names Bonine, Bonamine, Antivert, Postafen, Sea Legs, and Dramamine (Less Drowsy Formulation). Buclizine. Buclizine is an antihistamine and anticholinergic of the piperazine derivative family. It is considered to be an antiemetic, similar to meclizine.[1] In the United Kingdom, buclizine is one of three drugs contained in Migraleve tablets, marketed by McNeil Healthcare at migraine sufferers.[2] Jump up ^ Mostafa, G.

A. E.; Al-Badr, A. Cyclizine. Indications[edit] The drug Diconal is a combination of cyclizine with the opioid dipipanone.[2] Dipipanone is a schedule I controlled substance in the US, due to its high abuse potential. Contraindications[edit] Its antimuscarinic action warrants caution in patients with prostatic hypertrophy, urinary retention, or glaucoma. Benzodiazepine. A benzodiazepine /ˌbɛnzɵdaɪˈæzɨpiːn/ (sometimes colloquially "benzo"; often abbreviated "BZD") is a psychoactive drug whose core chemical structure is the fusion of a benzene ring and a diazepine ring. The first such drug, chlordiazepoxide (Librium), was discovered accidentally by Leo Sternbach in 1955, and made available in 1960 by Hoffmann–La Roche, which has also marketed the benzodiazepine diazepam (Valium) since 1963.[1] In general, benzodiazepines are safe and effective in the short term, although cognitive impairments and paradoxical effects such as aggression or behavioral disinhibition occasionally occur.

A minority react reverse and contrary to what would normally be expected. There is controversy concerning the safety of benzodiazepines in pregnancy. Etizolam. Etizolam (marketed under the brand name Etilaam, Etizest, Etizola, Sedekopan, Pasaden or Depas) is a benzodiazepine analog.[1] The etizolam molecule differs from a benzodiazepine in that the benzene ring has been replaced by a thiophene ring, making the drug a thienodiazepine.[2] It possesses amnesic, anxiolytic, anticonvulsant, hypnotic, sedative and skeletal muscle relaxant properties.[3] Lorazepam. Diazepam. Clonazepam. Chlordiazepoxide. Alprazolam. Alprazolam has a fast onset of action and symptomatic relief. Ninety percent of peak effects are achieved within the first hour of using either in preparation for panic disorder, and full peak effects are achieved in 1.5 and 1.6 hours respectively.[6][7] Peak benefits achieved for generalized anxiety disorder (GAD) may take up to a week.[8][9] Tolerance to the anxiolytic/antipanic effects is controversial with some authoritative sources reporting the development of tolerance,[10] and others reporting no development of tolerance;[3][11] tolerance will however, develop to the sedative-hypnotic effects within a couple of days.[11] Withdrawal symptoms or rebound symptoms may occur after ceasing treatment abruptly following a few weeks or longer of steady dosing, and may necessitate a gradual dose reduction.[8][12]