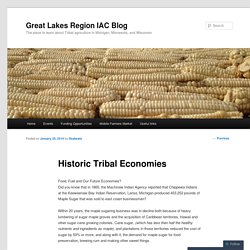 Did you know that in 1865, the Machinaw Indian Agency reported that Chippewa Indians at the Keeweenaw Bay Indian Reservation, Lanse, Michigan produced 453,252 pounds of Maple Sugar that was sold to east coast businessmen? Within 20 years, the maple sugaring business was in decline both because of heavy lumbering of sugar maple groves and the acquisition of Caribbean territories, Hawaii and other sugar cane growing colonies. Cane sugar, (which has less then half the healthy nutrients and ingredients as maple), and plantations in those territories reduced the cost of sugar by 50% or more, and along with it, the demand for maple sugar for food preservation, brewing rum and making other sweet things.

In 2014 prices at $55 a gallon (in 2015 a gallon of Penokee Gold Maple Syrup was being sold for $75 to $100 a gallon) the value of the syrup sold would have been around an estimagted $1,705.000. Historic photo is of Ms. Birch: the other sap. By Tamara Scully In Alaska and Canada birch trees have been tapped for sap for centuries. 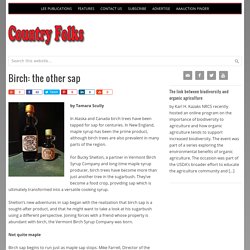 In New England, maple syrup has been the prime product, although birch trees are also prevalent in many parts of the region. For Bucky Shelton, a partner in Vermont Birch Syrup Company and long-time maple syrup producer, birch trees have become more than just another tree in the sugarbush. They’ve become a food crop, providing sap which is ultimately transformed into a versatile cooking syrup.

Shelton’s new adventures in sap began with the realization that birch sap is a sought-after product, and that he might want to take a look at his sugarbush using a different perspective. Sugar and sweeteners guide and comprehensive info. site. Barley Malt Syrup. Barley Malt Syrup is a natural sweetener that is dark brown in color, with a pleasant malty taste. 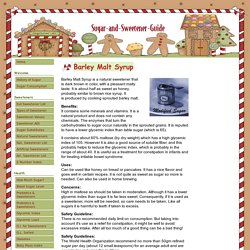 It is about half as sweet as honey, probably similar to brown rice syrup. It is produced by cooking sprouted barley malt. Benefits:It contains some minerals and vitamins. It is a natural product and does not contain any chemicals. The enzymes that turn the carbohydrates to sugar occur naturally in the sprouted grains. It contains about 60% maltose (by dry weight) which has a high glycemic index of 105. Uses:Can be used like honey on bread or pancakes. How to Make Sugar Beet Molasses. Sweet Potato Syrup – Homemade Sweetness. Grandpa's Cheese Barn's Sweet Potato Syrup From George Washington Carver’s How the Farmer Can Save His Sweet Potatoes and Ways of Preparing them for the Table (He connected his process with starch making): This is very easily made, all that is necessary is to grate the potato, the finer the better, put into a cheese cloth or thin muslin bag and dip up and down, in a vessel of water, squeezing occasionally, continue washing as long as the washings are very milky. 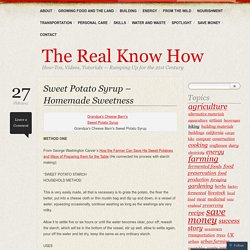 Allow it to settle five or six hours or until the water becomes clear, pour off; rewash the starch, which will be in the bottom of the vessel, stir up well, allow to settle again, pour off the water and let dry, keep the same as any ordinary starch. Use exactly the same as cornstarch in cooking; I am confident you will find it superior to cornstarch; it makes a very fine quality of library paste, and has very powerful adhesive qualities. In certain arts and trades it is almost indispensable. 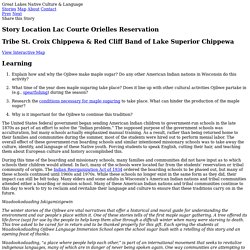 The supposed purpose of the government schools was acculturation, but many schools actually emphasized manual training. As a result, rather than being returned home to their families and communities during the summer, most of the students were hired out to perform menial labor. The overall effect of these government-run boarding schools and similar intentioned missionary schools was to take away the culture, identity, and language of these Native youth. Forcing students to speak English, cutting their hair, and teaching them about European culture and history accomplished this. During this time of the boarding and missionary schools, many families and communities did not have input as to which schools their children would attend.

Waadookodaading Iskigamizigewin Sugar bush marks a sweet end to a long winter. Tapping A Maple Tree. How to Make Your Own Stevia - GOING2NATURAL. Boiled Apple-Pear Syrup. Luckily I live in an area that grows lots and lots of apple varieties. 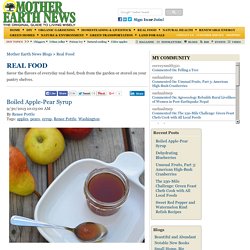 I don’t have any apple trees myself, but always have a plethora of options at the Farmer’s Market. And if I am willing to purchase apples with scars and a few bruises I can get them for around fifty cents per pound. It’s hard to turn down this great offer so I often go home with 25 pounds of apples. Then reality sets in, “I have to process all these apples!” Learn About Growing Sorghum: A Natural Sweetener - Sustainable Farming. Related Content Chevron: Butchering a Goat Sherry’s son worked hard to raise a goat. 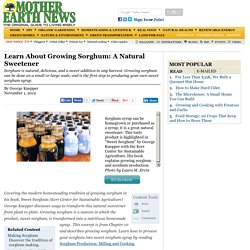 Read how he, with the help of family and friends, butchere... Covering the modern homesteading tradition of growing sorghum in his book, Sweet Sorghum (Kerr Center for Sustainable Agriculture) George Kuepper discusses ways to transform this natural sweetener from plant to plate. Growing sorghum is a custom in which the product, sweet sorghum, is transformed into a nutritious homemade syrup. Sorghum Production: Milling and Cooking - Sustainable Farming. Related Content Hand-Milling Sorghum A great opportunity to use a new hand-driven sorghum mill and cook down a small batch of sorghum for... 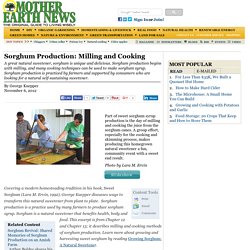 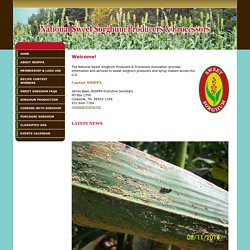 Contact NSSPPA James Baier, NSSPPA Executive Secretary PO Box 1356 Cookevile, TN 38503-1356 931-644-7764nssppa@charter.net White Sugarcane Aphid is causing real problems for sweet sorghum producers. This little pest proved to be devastating last year. Sweet sorghum producers must be vigilant in scouting and eradicating them early. The chemical, Transform has a section 18 approval for the midsouth. Sweet Sorghum Revival: How to Grow Your Own Natural Sweetener - Modern Homesteading. Related Content Hand-Milling Sorghum A great opportunity to use a new hand-driven sorghum mill and cook down a small batch of sorghum for... 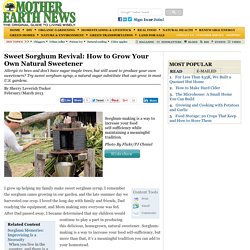 I grew up helping my family make sweet sorghum syrup. I remember the sorghum canes growing in our garden, and the late summer day we harvested our crop. I loved the long day with family and friends, Dad readying the equipment, and Mom making sure everyone was fed. How Salt Built Civilization. There must be something strangely sacred in salt. It is in our tears, and in the sea.

-Khalil Gibran Imagine the highways of today as they once were: old trade routes leading to major centers such as Tenochtitlan, Chaco, Paquime and Cahokia. Our big Native families would be decked out in their finest, packing beautiful handicrafts to sell and trade. Of course, many of us still do this, but instead of traversing well-worn dirt trails in our moccasins, we are schlepping stuff in our Chevy trucks and rez rockets, stopping at gas stations to top off our tanks with grease and insulin along the way. How to Make Malt Syrup (3 Steps) Camas Plant Care – Tips For Growing Camassia Bulbs. By Nikki Phipps Image by Jason Sturner Camassia, also known as Camas, is a perennial plant that is native to the Pacific Northwest areas of the United States; however, these lovely plants are quite hardy and easy to grow, readily adapting to other areas as well. Keep reading to learn more about the care of camas plants. Camassia Lily Bulb Info Camassias bloom in late spring, reaching heights of about 2-3 feet.

Camassia Lily Bulbs, Camassia leichtinii or Camassia caerulea - Fall Bulbs from American Meadows. Here's one of North America's little-known natives that belongs in every wildflower garden. The beautiful purplish-blue Camassia 'Lily', sometimes called American Hyacinth, is native to our northern plains and mountain states, and figured prominently in Native American history. The lilies carpet open areas in the northern plains, and the bulbs were used for both food and medicine.

The plant was 'discovered' by Lewis and Clark as they ventured west, and found the Indians harvesting thousands of Camassia bulbs. Lewis tried the meal made from the bulbs, and found it didn't agree with him, but that's fine. You probably don't plan on eating your Camassia bulbs. Photo Credit: Camassia was collected by the Lewis and Clark Expedition on the Weippe Prairie along Jim Ford Creek just south of Weippe, Clearwater Co., Idaho, on 23 Jun 1806.

The Sugarmaker's Companion by Michael Farrell. "Having quality 'go to' sources of information for the sugarmaker, whether they are new to the craft or experienced is wonderful. When research is done and compiled into easy to read and understand formats that hold the interest of the reader, it benefits the sugarmaker and the maple industry. Today's sugarmakers are hungry for sources just such as this to learn all they can to improve techniques, efficiency, and quality in their operations.