Pumpkin Power for chickens. Autumn is one of the girls' favorite times of the year. 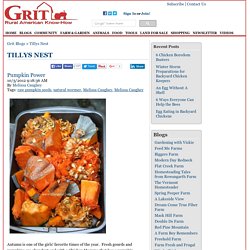 Fresh gourds and pumpkins are abundant and with a Chicken Momma that has a pumpkin collecting addiction this time of the year, there is never a shortage of delicious chunks and guts available to our girls. Brahma. Often referred to as the “King of All Poultry”, the Brahma chicken is appreciated for its great size, strength, and vigor. 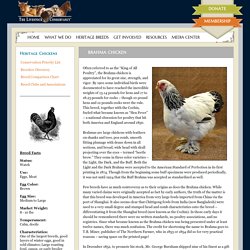 By 1901 some individual birds were documented to have reached the incredible weights of 13-14 pounds for hens and 17 to 18.25 pounds for cocks – though 10 pound hens and 12 pounds cocks were the rule. This breed, together with the Cochin, fueled what became known as “Hen Fever” – a national obsession for poultry that hit both America and England around 1850. Brahmas are large chickens with feathers on shanks and toes, pea comb, smooth fitting plumage with dense down in all sections, and broad, wide head with skull projecting over the eyes – termed “beetle brow.” They come in three color varieties – the Light, the Dark, and the Buff. Both the Light and the Dark Brahma were accepted to the American Standard of Perfection in its first printing in 1874. You may be interested in...

Chantecler. Buckeye. Buckeye chickens enjoying hay video The Buckeye is a dual-purpose breed of chicken with a deep, lustrous red color of plumage. 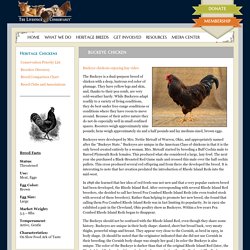 They have yellow legs and skin, and, thanks to their pea comb, are very cold-weather hardy. While Buckeyes adapt readily to a variety of living conditions, they do best under free-range conditions or conditions where they have room to move around. Because of their active nature they do not do especially well in small confined spaces. Roosters weigh approximately nine pounds; hens weigh approximately six and a half pounds and lay medium-sized, brown eggs.

Buckeyes were developed by Mrs. In 1896 she learned that her idea of red fowls was not new and that a very popular eastern breed had been developed, the Rhode Island Red. The Buckeye should not be confused with the Rhode Island Red, even though they share some history. Buckeyes also have a personality all their own. You may be interested in... APPPA - American Pastured Poultry Producers Association. La Flèche Chickens. La Fleche - The Livestock Conservancy. La Fleche. Pros: Foraging ability, non-aggressive,good layers, lovely shiny black plumage. 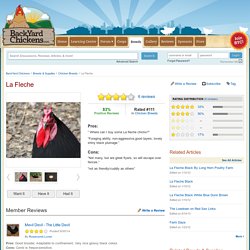 Cons: Not many, but are great flyers, so will escape over fences. I'm producing a review as nobody has done so yet, but I'm no expert on these birds. I hatched mine from eggs and the fertility of my own 4 hens and one rooster has been exceptional.They are described as large fowl....my hens weigh about 5-6 lbs and the rooster a bit more, but they are young birds (hatched August 2011).They have lovely shiny all black feathers, with a striking V comb and white earlobes. Though many reviews I read described them as 'skittish' and untameable, I have NOT found this to be the case.

Though slightly nervous, they come when called, pen themselves at dusk, and are no more difficult to manage than my Brahmas. They need little food to survive in the free-range environment being excellent foragers. Holland - The Livestock Conservancy. Holland. Pros: Great layers of XXL eggs, VERY calm, extremely friendly, non bird-aggressive, good foragers, HARDY! 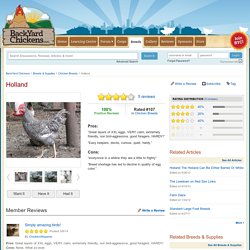 Cons: None. What so ever. The Holland is one of those dreamy, perfect breeds for every owner of a mixed flock or the person who desires good producing birds that are friendly and low-stress. Dorking. Pros: Lots of personality, very person and bird friendly, good foragers, great layers, VERY hardy Cons: They're a little dorky, pun totally intended. 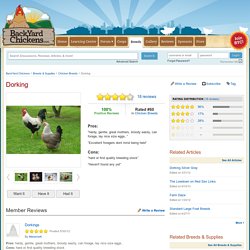 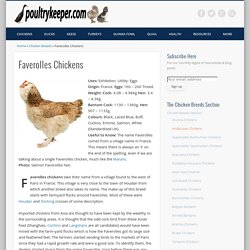 Utility: EggsOrigin: France. Eggs: 160 – 200 Tinted.Weight: Cock: 4.08 – 4.98Kg Hen: 3.4 – 4.3KgBantam Cock: 1130 – 1360g, Hen: 907 – 1133g.Colours: Black, Laced Blue, Buff, Cuckoo, Ermine, Salmon, White (Standardised UK).Useful to Know: The name Faverolles comes from a village name in France. This means there is always an ‘s’ on the end of the spelling, even if we are talking about a single Faverolles chicken, much like the Marans.Photo: Salmon Favorolles hen. Faverolles chickens take their name from a village found to the west of Paris in France. This village is very close to the town of Houdan from which another breed also takes its name.