Cutler - AutismPedia. From AutismPedia (Redirected from Protocols/Cutler) Go Back to Protocols Andrew Hall Cutler, PhD, PE - Andrew Cutler received his Ph.D. in chemistry from Princeton University, was once mercury poisoned and got well using a rational chelation protocol which he pioneered. Introduction A Note About Chelation A survey of thousands of parents of autistic children or children with Asperger’s by the Autism Association found that chelation/detoxification was by far the most effective treatment for autism and also much safer than most drug treatments for autism spectrum conditions.[1] This is consistent with the findings of most autism treatment clinic tests that most autistic children tested are highly mercury and metal toxic. 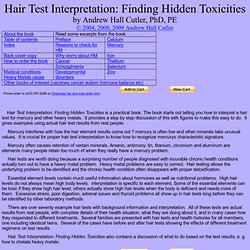 The book starts out telling you how to interpret a hair test for mercury and other heavy metals. It provides a step by step discussion of this with figures to make this easy to do. Mercury interferes with how the hair element results come out ? Mercury often causes retention of certain minerals. Hair tests are worth doing because a surprising number of people diagnosed with incurable chronic health conditions actually turn out to have a heavy metal problem.

Essential element levels contain much useful information about hormones as well as nutritional problems. There are over seventy example hair tests with background information and interpretation. What the Author has to say I wrote this book to make hair tests useful for both sick people and their doctors. What People have to say In this book Dr. Index to posts by Andy Cutler. Mercury Detox: Information, Tools, and Resources. Andy Cutler's mercury detoxification protocol Dentistry > Amalgam FAQ. Six years ago American scientist Andy Cutler (Andrew Hall Cutler Ph.D, P.E.) developed a specific mercury detoxification protocol which really works. 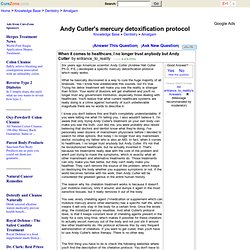 What he basically discovered is a way to cure the huge majority of all illnesses. Yes I know how unbelievable this sounds, but it's true. Trying his detox treatment will make you see the reality is stranger than fiction. Your world of illusions will get shattered and you'll no longer trust any government institution, especially those dealing with healthcare. You'll realize that what current healthcare systems are really doing is a crime against humanity of such unbelievable magnitude there are no words to describe it.

Frequent-dose-chelation : Message: Re: Versions of vertigo. My main symptom is a constant vertigo and ringing/roaring in the ears. 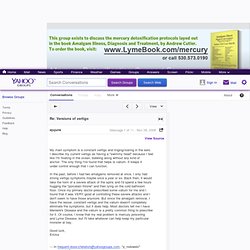 I describe my current vertigo as having a "swimmy head" because I feel like I'm floating in the ocean, bobbing along without any kind of anchor. The only thing I've found that helps is valium. It keeps it under control enough that I can function. In the past, before I had two amalgams removed at once, I only had strong vertigo symptoms maybe once a year or so. Back then, it would take the form of a severe attack of the spins and I'd spend a few hours hugging the "porcelain throne" and then lying on the cold bathroom floor.

By Andrew Hall Cutler, Ph. D., P. E. A wide variety of debilitating and supposedly incurable conditions may actually be due to chronic mercury poisoning. Mercury poisoning can be easily cured if it is recognized. These conditions are seldom cured because mercury poisoning is believed to be rare. Many of today's "mystery syndromes" that physicians don't know how to treat at all - fibromyalgia, chronic fatigue, anorexia, recurrent depression - aren't mystery syndromes. This book gives practical guidance on how to tell if you really have chronic mercury poisoning or some other problem. Sections also explain how the scientific literature shows many people must be getting poisoned by their amalgam fillings, why such a regulatory blunder occurred, and how the debate between "mainstream" and "alternative" medicine makes it more difficult for you to get the medical help you need.

A key section is devoted to diagnosis - how to tell if you actually have amalgam illness instead of something else. Sulfates, Sulfation and Feingold diet « livingnetwork.co.za/ Low plasma sulfate/sulphate levels & high phenol/salicylate food list If you are low in plasma sulfate, then you need to supplement it in order to increase your sulfate levels. 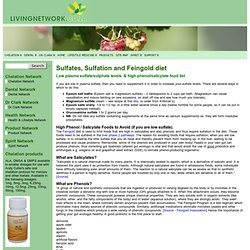 There are several ways in which to do this: Epsom salt baths (Epsom salt is magnesium sulfate) – 2 tablespoons to 2 cups per bath. (Magnesium can cause vasodilation and induce fainting on rare occasions, so start off low and see how much you tolerate).Magnesium sulfate cream – see recipe at this site, or order from Kirkman’s).Epsom salts orally, 1/4 to 1/2 tsp. in a little water several times a day (tastes horrible for some people, so it can be put in empty capsules instead).Glucosamine sulfate 1 to 2 grams per day.NB: Do not take any sulfate containing supplements at the same time as calcium supplements as they will form insoluble precipitates.