American Memory from the Library of Congress - Browse by. Gertrude Stein. I am writing for myself and strangers. 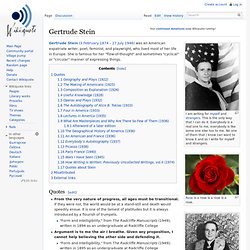 This is the only way that I can do it. Everybody is a real one to me, everybody is like some one else too to me. Michael Gold, "Gertrude Stein: A Literary Idiot" By Michael Gold first published in The New Masses Gertrude Stein recently returned to America after an absence of many years. 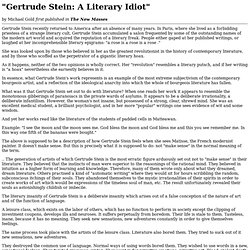 In Paris, where she lived as a forbidding priestess of a strange literary cult, Gertrude Stein accumulated a salon frequented by some of the outstanding names of the modern art world and acquired the reputation of a literary freak. People either gaped at her published writings, or laughed at her incomprehensible literary epigrams- "a rose is a rose is a rose . " She was looked upon by those who believed in her as the greatest revolutionist in the history of contemporary literature, and by those who scoffed as the perpetrator of a gigantic literary hoax.

As it happens, neither of the two opinions is wholly correct. Ashbery on Gertrude Stein. This is the latest volume in the series of the unpublished writings of Gertrude Stein which the Yale University Press has been bringing out regularly for the last decade. 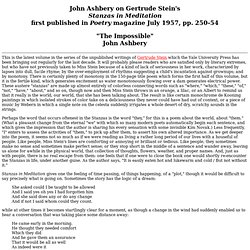 It will probably please readers who are satisfied only by literary extremes, but who have not previously taken to Miss Stein because of a kind of lack of seriousness in her work, characterized by lapses into dull, facile rhyme; by the over-employment of rhythms suggesting a child's incantation against grownups; and by monotony. There is certainly plenty of monotony in the 150-page title poem which forms the first half of this volume, but it is the fertile kind, which generates excitement as water monotonously flowing over a dam generates electrical power. Perhaps the word that occurs oftenest in the Stanzas is the word "they," for this is a poem about the world, about "them. " He came early in the morning. Electronic Poetry Center. Dydo. Ulla E. 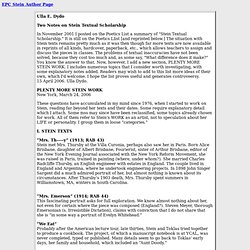 Dydo Two Notes on Stein Textual Scholarship In November 2001 I posted on the Poetics List a summary of "Stein Textual Scholarship. " It is still on the Poetics Llist [and reprinted below.] The situation with Stein texts remains pretty much as it was then though far more texts are now available in reprints of all kinds, hardcover, paperback, etc., which allows teachers to assign and discuss the pieces in classes. Electronic Poetry Center. Gertrude stein. Gertrude Stein News. Gertrude Stein Collection at Bartleby.com. Stein's Life and Career. Stein's Life and Career Linda Wagner-Martin. 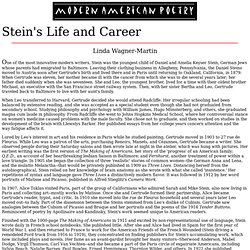 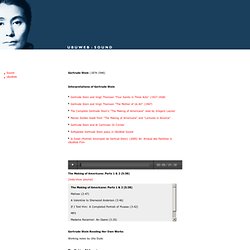 Web Sound - Gertrude Stein and Al Carmines 'In Circles' Gertrude Stein (1874-1946) Back to Gertrude Stein's main page on UbuWeb Gertrude Stein and Al Carmines 'In Circles' (1967) Gertrude Stein's writings have been a goldmine for composers of the past 50 years, if we are to judge from the innumerable examples of her texts set to music, yet a Broadway musical is, to my knowledge, a unique case among more Avantgarde settings. 'Gertrude Stein is an index for us', said composer Al Carmines (Reverend Alvin Allison Carmines, 1936-2005) who, as a minister at New York's Judson Memorial Church on Washington Square Park between the early 1960s and 1982, promoted contemporary theatre and dance performances inside the Church itself. A gifted pianist, he also wrote some of the music used in these shows, to the point of composing several musicals, often with stage direction by Larry Kornfeld.

From the time she moved to France in 1903 until her death in Neuilly-sur-Seine in 1946, American writer Gertrude Stein was a central figure in the Parisian art world. 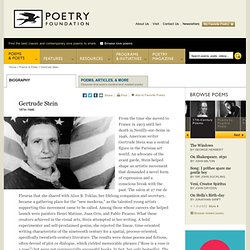 An advocate of the avant garde, Stein helped shape an artistic movement that demanded a novel form of expression and a conscious break with the past. The salon at 27 rue de Fleurus that she shared with Alice B. Toklas, her lifelong companion and secretary, became a gathering place for the "new moderns," as the talented young artists supporting this movement came to be called. Among those whose careers she helped launch were painters Henri Matisse, Juan Gris, and Pablo Picasso. What these creators achieved in the visual arts, Stein attempted in her writing. Though commercial publishers slighted her experimental writings and critics dismissed them as incomprehensible, Stein's theories did interest some of the most talented writers of the day. Gertrude Stein Biography from Who2.com. North Side: People: Gertrude Stein: Forgotten or Unknown. Pittsburgh Press, A dozen members of Pittsburgh's oldest aristocracy have cemented a lurking notion that Gertrude Stein, world's foremost female exponent of "What's It All About" literature, is the daughter Pittsburgh forgot. 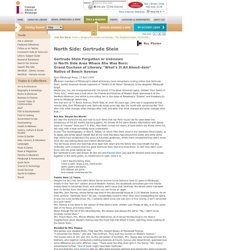 Maybe you, too, are unacquainted with the lyricist of the latest American opera, dubbed "Four Saints in Three Acts," which was a bust when the Friends and Enemies of Modern Music sponsored it at the Hartford Athenium, but which is now rolling 'em in the aisles at Broadway's "Empire" and threatens to come to Pittsburgh before long. She was born at 71 Beech Avenue, North Side, an even 60 years ago. Little was it suspected at that remote date, that Pittsburgh's own Gertrude would some day slay the world with sentences like "And after that what changes what changes after that, and after that what changes and what changes after that... " It was "The Autobiography of Alice B. 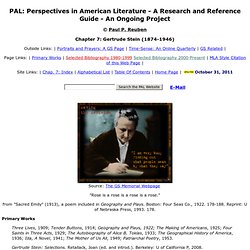 Stein-bio. Gertrude Stein. American writer, an eccentric whose Paris home was a salon for the Cubist and experimental artist and writers, among them Pablo Picasso, Henri Matisse, Georges Braque, Juan Gris, F. 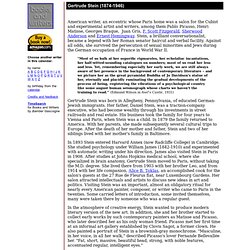 Scott Fitzgerald, Sherwood Anderson and Ernest Hemingway. Stein, a brilliant conversationalist, became a legend with her Roman senator haircut and verbal facility. Against all odds, she survived the persecution of sexual minorities and Jews during the German occupation of France in World War II. Gertrude Stein. Gertrude Stein was born in Allegheny, Pennsylvania, on February 3, 1874, to wealthy German-Jewish immigrants. At the age of three, her family moved first to Vienna and then to Paris.

They returned to America in 1878 and settled in Oakland, California. Her mother, Amelia, died of cancer in 1888 and her father, Daniel, died 1891. Stein attended Radcliffe College from 1893 to 1897, where she specialized in Psychology under noted psychologist William James. After leaving Radcliffe, she enrolled at the Johns Hopkins University, where she studied medicine for four years, leaving in 1901. Gertrude Stein. Gertrude Stein (1874-1946) "Those who are creating the modern composition authentically are naturally only of importance when they are dead because by that time the modern composition having become past is classified and the description of it is classical.

That is the reason why the creator of the new composition in the arts is an outlaw until he is a classic, there is hardly a moment in between and it is really too bad very much too bad naturally for the creator but also very much too bad for the enjoyer, they all really would enjoy the created so much better just after it has been made than when it is already a classic, but it is perfectly simple that there is no reason why the contemporaries should see, because it would not make any difference as they lead their lives in the new composition anyway, and as every one is naturally indolent why naturally they don't see.