The Meadows Ranch provides a safe, nurturing environment where we have treated eating disorders for more than 25 years. We understand the pain that an eating disorder can bring to not only the one suffering first hand but also their loved ones. For additional information about the treatment of eating disorders, call us at 866-332-7381. 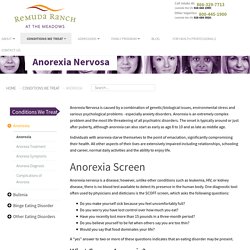 Anorexia is an extremely complex problem and the most life threatening of all psychiatric disorders. The onset is typically around or just after puberty, although anorexia can also start as early as age 8 to 10 and as late as middle age. Individuals with anorexia starve themselves to the point of emaciation, significantly compromising their health. All other aspects of their lives are extensively impaired including relationships, schooling and career, normal daily activities and the ability to enjoy life. Anorexia nervosa is a disease; however, unlike other conditions such as leukemia, HIV, or kidney disease, there is no blood test available to detect its presence in the human body. Do you make yourself sick because you feel uncomfortably full? What Causes Anorexia? Many factors contribute to the onset of anorexia. Signs of Eating Disorders: Symptoms and Warning Signs. An eating disorder is any of a range of psychological disorders characterized by abnormal or disturbed eating habits. 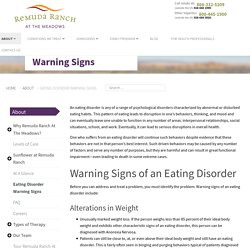 This pattern of eating leads to disruption in one’s behaviors, thinking, and mood and can eventually leave one unable to function in any number of areas: interpersonal relationships, social situations, school, and work. Eventually, it can lead to serious disruptions in overall health. One who suffers from an eating disorder will continue such behaviors despite evidence that these behaviors are not in that person’s best interest. Dual Diagnosis, Addiction and Eating Disorders: Self Destructive Behavior. It is fairly common for people to struggle with both an addiction and a mental health disorder at the same time. 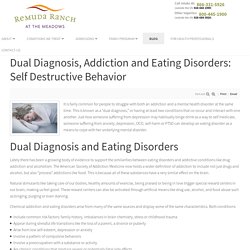 This is known as a “dual diagnosis,” or having at least two conditions that co-occur and interact with one another. Just how someone suffering from depression may habitually binge drink as a way to self medicate, someone suffering from anxiety, depression, OCD, self-harm or PTSD can develop an eating disorder as a means to cope with her underlying mental disorder. Lately there has been a growing body of evidence to support the similarities between eating disorders and addictive conditions like drug addiction and alcoholism. The American Society of Addiction Medicine now holds a wider definition of addiction to include not just drugs and alcohol, but also “process” addictions like food.

Help Eating Disorder Treatment For Girls and Women. Recovery is possible; it’s happening every day at Remuda Ranch at The Meadows. 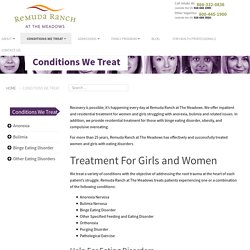 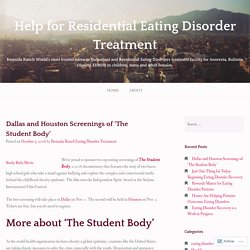 The film won the Independent Spirit Award at the Sedona International Film Festival. The first screening will take place in Dallas on Nov. 1. The second will be held in Houston on Nov. 2. Tickets are free, but you do need to register. As the world health organization declares obesity a global epidemic, countries like the United States are taking drastic measures to solve the crisis, especially with the youth. Tackling this controversial issue like no other story, The Student Body strikes a chord with a nation filled with concern, confusion, division and questions. Rewards Matter for Eating Disorder Patients – Help for Residential Eating Disorder Treatment. By Vicki Berkus M.D., Ph.D., CEDS, Remuda Ranch Medical Advisor People who are struggling with their eating disorders (ED) and refusing to cooperate in treatment often need rewards they can work toward. 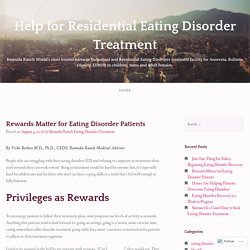 Being in treatment would be hard for anyone; but, it’s especially hard for adolescents and for those who don’t yet have coping skills or a mind that’s fed well enough to fully function. To encourage patients to follow their treatment plans, most programs use levels of activity as rewards. Anything that patients tend to look forward to–going on outings, going to a movie, more exercise time, eating somewhere other than the treatment group table for a meal—can serve as motivation for patients to adhere to their treatment regimens. I used to be stopped in the hall by my patients with requests. Remuda Ranch Center for Anorexia & Bulimia: Fear(less) bites back. Jumping out of a plane with a complete stranger on my back. 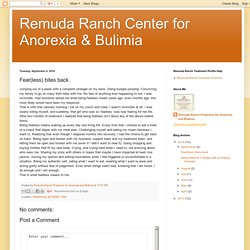 Going bungee jumping. Convincing my family to go on crazy thrill rides with me. No fear of anything ever happening to me. I was invincible. Had someone asked me what being fearless meant years ago, even months ago, this most likely would have been my response. That is until that January morning I sat on my couch and cried. Bulimia Nervosa Best treatment. Professional care is usually required to break the highly addictive binge/purge cycle. 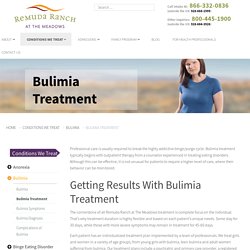 Bulimia treatment typically begins with outpatient therapy from a counselor experienced in treating eating disorders. Although this can be effective, it is not unusual for patients to require a higher level of care, where their behavior can be monitored. The cornerstone of all Remuda Ranch at The Meadows treatment is complete focus on the individual. That’s why treatment duration is highly flexible and based on each patient’s unique needs. Some stay for 30 days, while those with more severe symptoms may remain in treatment for 45-60 days. 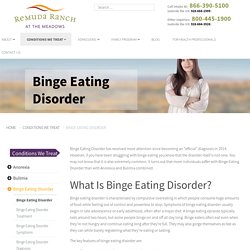 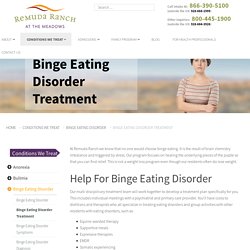 It is the result of brain chemistry imbalance and triggered by stress. Our program focuses on healing the underlying pieces of the puzzle so that you can find relief. This is not a weight loss program even though our residents often do lose weight. Our multi-disciplinary treatment team will work together to develop a treatment plan specifically for you. This includes individual meetings with a psychiatrist and primary care provider. Equine-assisted therapySupportive mealsExpressive therapiesEMDRSomatic experiencingOther therapies may also be recommended and provided. Thanksgiving and Eating Disorders. Thanksgiving is a time for celebrating our loved ones and focusing on the things we are grateful for. It can also bring high levels of stress and anxiety, particularly if you struggle with an eating disorder or are recovering from one. The holidays are often food-centric, and it is a normal occurrence to gather over big meals making this time of year scary and overwhelming.

If you are suffering or recovering from anorexia, you will have a fear of being expected to eat and enjoy it. If you are bulimic or have a binge eating disorder, it can be hard to control the urges to binge and purge because there are so many triggers. With food and feasting being the focus of this holiday, and in many cases overindulgence being encouraged, your conscience can become very heavy. Horses Can Help Uncover Personal Truths. By Colleen DeRango, MA, LISAC, SEP, Co-Facilitator of Equine Workshops In my most quiet moments of reflection, I often recall what one client said in one of her somatic equine sessions: "Nothing reduces my anxiety from a 9 to a 3 faster than being with a horse. " I don't know why this is, but I do know that it is my daily experience around these sacred beings who have blessed my life. In this world of addiction, trauma, and mood disorder treatment, we often spend time looking through the lens of pathology; whereas, in the presence of a horse, we seem to quite often be looking through the lens of authenticity.

Horses somehow help us return to the truth of who we really are. How the Media Affects Body Image and Eating Disorders. If someone feels negative about their body, it can be detrimental to how they see themselves as a person. The media has a significant influence on society’s overall standards of the body type most esteemed by our society. This idealized body type appears in movies, on television screens, and in magazines and happens to weigh 23% less than the average American woman (1). At least one-quarter of present-day media celebrities meet the weight criteria for anorexia. Women and girls are, therefore, comparing themselves to ultra-thin, unrealistic standards seen on TV and in magazines. Some of these images are not even real bodies, but a mix of body parts Photoshopped together to create an artificially desirable body type.

Eating Disorder Treatment Center - Contact Us. Purging Disorder - Purging Eating Disorder Arizona. “Purging” is the name given to “inappropriate compensatory behaviors” or efforts to “undo” or “get rid of” food after eating. Purging can be a symptom of any eating disorder and can happen occasionally or after overeating and/or binge eating. When purging is the only eating disorder symptom, or when someone uses a purging method after eating a small or “normal” amount of food, this is called Purging Disorder.

Purging can take on an addictive quality due to the brain chemistry changes it causes and the feeling of “emptiness” or “lightness” it produces. Together these effects provide a physical and psychological sense of relief to someone who is using them in response to stress. This false relief is very short-lived and leads to the compulsion or need to do the behaviors again and again. Although Purging Disorder may initially start as an effort to control body weight, it often has the reverse effect. Eating Disorders in Children. As a parent, you anticipate so many events in the life of your child: birthdays, graduations, perhaps even a future marriage and children.

Here’s one thing a mother or father never anticipates: the advent of an eating disorder. Unfortunately, eating disorders are epidemic throughout America, especially in young people. Although the average age of onset is 14, children are being diagnosed today as young as eight. Professional Care - Teen Bulimia Treatment - Remuda Ranch Clinic. Professional care is usually required to break the highly addictive binge/purge cycle.