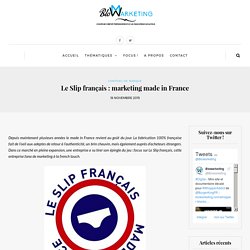 10 brands that got big without advertising. A vast majority of today's businesses started small and grew organically, up to a point. 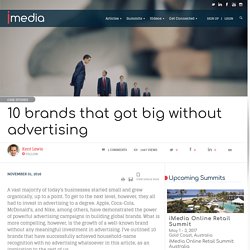 To get to the next level, however, they all had to invest in advertising to a degree. Apple, Coca-Cola, McDonald's, and Nike, among others, have demonstrated the power of powerful advertising campaigns in building global brands. What is more compelling, however, is the growth of a well-known brand without any meaningful investment in advertising. I've outlined 10 brands that have successfully achieved household-name recognition with no advertising whatsoever in this article, as an inspiration to the rest of us. The secret sauce While each of the top 10 best brands has a unique story, they all share common DNA. 10 Cult Brands So Popular They Don't Need To Advertise. Huy Fong Foods, the makers of Sriracha If you like to treat your taste buds well then you’ve probably heard of Sriracha, but you likely haven’t seen an ad for it on TV. 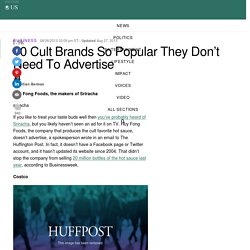 Huy Fong Foods, the company that produces the cult favorite hot sauce, doesn’t advertise, a spokesperson wrote in an email to The Huffington Post. In fact, it doesn’t have a Facebook page or Twitter account, and it hasn’t updated its website since 2004. That didn’t stop the company from selling 20 million bottles of the hot sauce last year, according to Businessweek. Costco The big box retailer, known for its bulk toilet paper and fair treatment of workers, also doesn’t pay for advertising, a spokesperson for the company confirmed to HuffPost in an email. Krispy Kreme Apparently those hot and ready signs are enough to draw the donut-loving masses into Krispy Kreme stores. Primark, la marque qui cartonne... sans pub. The best brands are 'built on product not advertising’, says Apple co-founder Steve Wozniak - Marketing Week. Apple-co founder Steve Wozniak has criticised brands that prioritise advertising over product innovation. 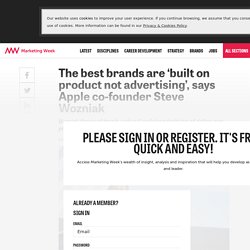 Wozniak, who famously founded tech giant Apple alongside Steve Jobs and Ronald Wayne, admitted his perception of marketers used to constitute as “those funny folk who would battle against our [engineers’] ideas”. Speaking in his headline slot at the Festival of Marketing yesterday (5 October), he also admitted a marketer once pleaded with him and Jobs to stop using ‘Apple’ as the brand name. “Our ad agency said to me and Steve: ‘You’ve got to give up the name Apple as it doesn’t imply the power of the computers’,” revealed Wozniak. “We tried to tell them once our products get into the home and change people’s lives it will make sense as an apple is a good name for a household brand.” Read More: Why Apple is looking to shift brand perceptions to become more than just ‘the iPhone maker’ “People ask ‘Are [Apple] innovating?’

So what for the future? Some Brands Thrive Without Advertising. Like urban legends or e-mails that somehow get passed around the world, some consumer brands have thrived simply on buzz generated by word of mouth. 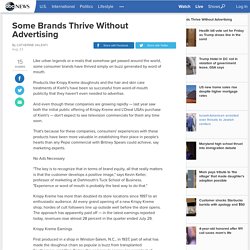 Products like Krispy Kreme doughnuts and the hair and skin care treatments of Kiehl's have been so successful from word-of-mouth publicity that they haven't even needed to advertise. And even though these companies are growing rapidly — last year saw both the initial public offering of Krispy Kreme and L'Oreal USA's purchase of Kiehl's — don't expect to see television commercials for them any time soon. That's because for these companies, consumers' experiences with these products have been more valuable in establishing their place in people's hearts than any Pepsi commercial with Britney Spears could achieve, say marketing experts.

No Ads Necessary Krispy Kreme has more than doubled its store locations since 1997 to an enthusiastic audience. How GoPro and Tesla Hacked Digital Marketing. Dominic Smith is a senior writer and content strategist for Rackspace Digital, the digital marketing infrastructure specialists. 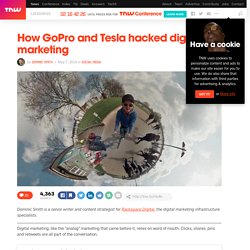 Digital marketing, like the “analog” marketing that came before it, relies on word of mouth. Clicks, shares, pins and retweets are all part of the conversation. Even in the age of BuzzFeed and go-viral formulas (online quizzes involving yesteryear celebrities apparently back in style), many brands still engage traditional ad agencies and marketing consultants to craft their message. But a handful of companies go it alone, even after they achieve considerable success. Two companies that have broken away from the pack for their unconventional use of digital marketing channels are GoPro Camera and Tesla, the electric car manufacturer. 4 Brands That Built Empires Without Traditional Advertising. Franklin Morris is a Senior Writer for Rackspace Digital—the digital marketing infrastructure specialists. 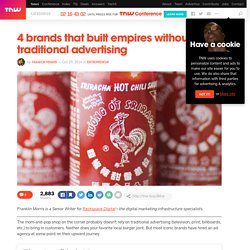 The mom-and-pop shop on the corner probably doesn’t rely on traditional advertising (television, print, billboards, etc.) to bring in customers. Neither does your favorite local burger joint. But most iconic brands have hired an ad agency at some point on their upward journey. In 2014, businesses will spend nearly $545 billion on advertising, and that number is expected to increase by another $100 billion by 2018, according to eMarketer. Les 12 Leçons Business du Créateur de Tesla - JAMZ. En lisant l’excellent livre sur Elon Musk, j’ai découvert bien plus qu’un entrepreneur mais un visionnaire absolu qui fait exactement – et brillamment – ce qu’il dit. 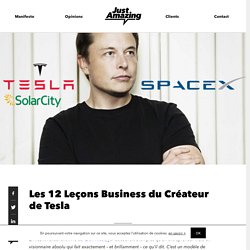 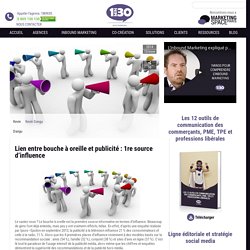