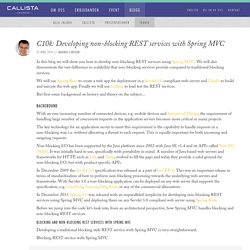 We will also demonstrate the vast difference in scalability that non-blocking services provide compared to traditional blocking services. We will use Spring Boot to create a web app for deployment in a Servlet 3.0 compliant web-server and Gradle to build and execute the web app. Finally we will use Gatling to load test the REST services. Spring MVC REST Exception Handling Best Practices (part 1)

RESTful API Design: what about errors? In the previous posts in this series about Pragmatic REST API design, I talked about simplyfing associations, using the HTTP ? 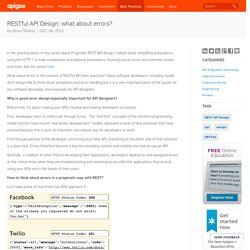 To hide complexities and optional parameters, choosing plural nouns and concrete names, and more. See the series here. What about errors in the context of RESTful API best practices? Many software developers, including myself, don't always like to think about exceptions and error handling but it is a very important piece of the puzzle for any software developer, and especially for API designers. Why is good error design especially important for API designers?

Bottom line, it's about making your APIs intuitive and making developers successful. First, developers learn to write code through errors. From the perspective of the developer consuming your Web API, everything at the other side of that interface is a black box. YouTube. Api-design-ebook-2012-03.pdf. API Design: Harnessing HATEOAS, Part 1. Previously, we discussed HATEOAS (the hypermedia constraint) within the context of REST. 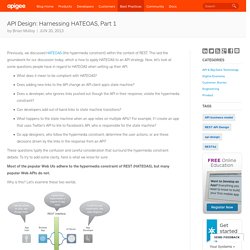 This laid the groundwork for our discussion today, which is how to apply HATEOAS to an API strategy. Now, let’s look at some questions people have in regard to HATEOAS when setting up their API. What does it mean to be compliant with HATEOAS? Does adding new links to the API change an API client app’s state machine? Best Practices for Designing a Pragmatic RESTful API. Your data model has started to stabilize and you're in a position to create a public API for your web app. 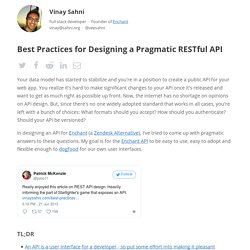 You realize it's hard to make significant changes to your API once it's released and want to get as much right as possible up front. Now, the internet has no shortage on opinions on API design. Get developer hugs with rich error handling in your API. Server-side error handling and communication are major, often under-appreciated components in designing a REST API. 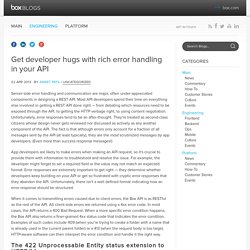 Most API developers spend their time on everything else involved in getting a REST API done right — from debating which resources need to be exposed through the API, to getting the HTTP verbage right, to using content negotiation. Unfortunately, error responses tend to be an after-thought. They're treated as second-class citizens whose design never gets reviewed nor discussed as actively as any another component of the API. The fact is that although errors only account for a fraction of all messages sent by the API (at least typically), they are the most scrutinized messages by app developers. 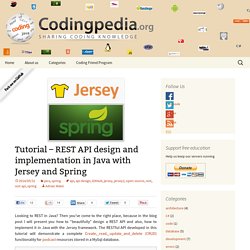 Then you’ve come to the right place, because in the blog post I will present you how to “beautifully” design a REST API and also, how to implement it in Java with the Jersey framework. The RESTful API developed in this tutorial will demonstrate a complete Create,_read,_update_and_delete (CRUD) functionality for podcast resources stored in a MySql database. 1. RESTful Web Services Example in Java with Jersey, Spring and MyBatis. **Promotion** - Efficiently manage your coding bookmarks, aka #codingmarks, on www.codingmarks.org and share your hidden gems with the world. 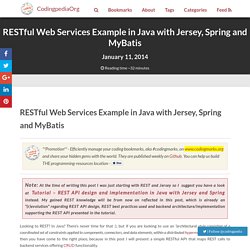 They are published weekly on Github. You can help us build THE programming-resources location - Note: At the time of writing this post I was just starting with REST and Jersey so I suggest you have a look at Tutorial – REST API design and implementation in Java with Jersey and Spring instead. My gained REST knowledge will be from now on reflected in this post, which is already an “(r)evolution” regarding REST API design, REST best practices used and backend architecture/implementation supporting the REST API presented in the tutorial. Looking to REST? Note: I will not focus too much on Representational state transfer (REST) itself, because there are plenty of resources on the topic in the internet, some of which I listed under Resources at the end of the post. 1. 1.1. 1.2. So, the best way to get to know the technology is build a prototype with it. 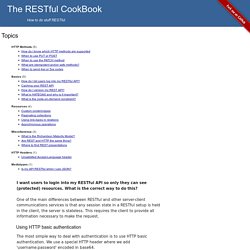 What is the correct way to do this? One of the main differences between RESTful and other server-client communications services is that any session state in a RESTful setup is held in the client, the server is stateless. This requires the client to provide all information necessary to make the request. Using HTTP basic authentication The most simple way to deal with authentication is to use HTTP basic authentication. GET / HTTP/1.1 Host: example.org Authorization: Basic Zm9vOmJhcg==

Create your own REST API Using OAuth Authentication. As a result of more and more information being available online, information sharing between websites has become widespread. 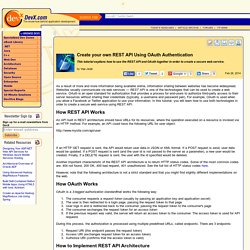 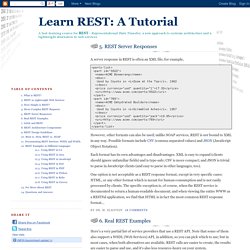 Possible formats include CSV (comma-separated values) and JSON (JavaScript Object Notation). Each format has its own advantages and disadvantages. XML is easy to expand (clients should ignore unfamiliar fields) and is type-safe; CSV is more compact; and JSON is trivial to parse in JavaScript clients (and easy to parse in other languages, too). Untitled. All of our examples will be based on Spring Boot. We’ll reprint the same setup code for each example. Our example models a simple bookmark service, à la Instapaper or other cloud-based bookmarking services. Our bookmark service simply collects a URI, and a description. All bookmarks belong to a user account.