Collaboration is to Reduce Asymmetrical Information 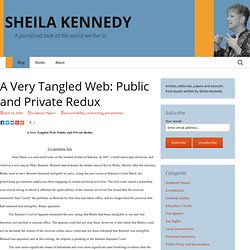 In 2007, it held municipal elections, and voted in a new mayor, Duke Bennett. Bennett had defeated the former mayor, Kevin Burke. Shortly after the election, Burke sued to have Bennett declared ineligible to serve, citing the provisions of Indiana’s Little Hatch Act prohibiting government employees from engaging in certain political activities.

The Indiana Court of Appeals reinstated the suit, ruling that Burke had been ineligible to run and was therefore not entitled to assume office. The case raises significant issues of federalism and even more significant (and troubling) evidence that the line separating public and private is rapidly becoming indecipherable, lost in a tangle of outsourcing, contracting, public-private partnerships and the like. “No evidence indicates Bennett willfully flouted the Act. The appellate court disagreed. How Did We Get Here? Information asymmetry. In contract theory and economics, information asymmetry deals with the study of decisions in transactions where one party has more or better information than the other. 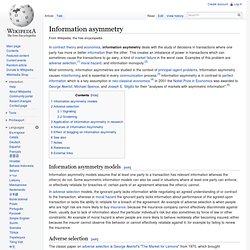 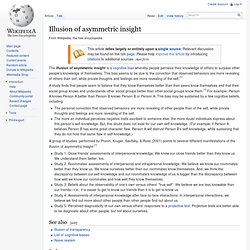 This bias seems to be due to the conviction that observed behaviors are more revealing of others than self, while private thoughts and feelings are more revealing of the self.[1] A study finds that people seem to believe that they know themselves better than their peers know themselves and that their social group knows and understands other social groups better than other social groups know them.[1] For example: Person A knows Person A better than Person B knows Person B or Person A. This bias may be sustained by a few cognitive beliefs, including: Reducing informational asymmetry. Asymmetry - definition of asymmetry by the Free Online Dictionary. The American Heritage® Dictionary of the English Language, Fourth Edition copyright ©2000 by Houghton Mifflin Company. 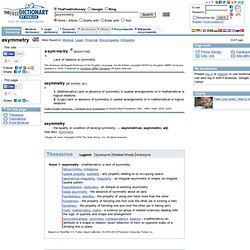 Updated in 2009. Published by Houghton Mifflin Company. All rights reserved. asymmetry (æˈsɪmɪtrɪ; eɪ-) n 1. 2. What We Don’t Know. For the free market to work it is assumed that everyone knows everything, or at least everything they need to know. 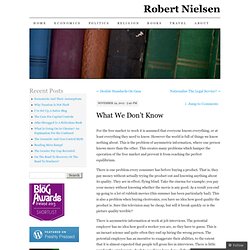 However the world is full of things we know nothing about. This is the problem of asymmetric information, where one person knows more than the other. This creates many problems which hamper the operation of the free market and prevent it from reaching the perfect equilibrium. There is one problem every consumer has before buying a product. That is, they pay money without actually trying the product out and knowing anything about its quality. There is asymmetric information at work at job interviews. Informational asymmetry - definition of informational asymmetry by the Free Online Dictionary. Information Asymmetry, R&D, and Insider Gains - Aboody - 2002 - The Journal of Finance. Symmetry - definition of symmetry by the Free Online Dictionary. 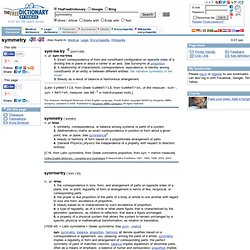 Updated in 2009. Published by Houghton Mifflin Company. All rights reserved. symmetry (ˈsɪmɪtrɪ) Journal of Business Research - The impact of quality uncertainty without asymmetric information on market efficiency. Volume 60, Issue 8, August 2007, Pages 858–867 Complexities in Markets Special Issue Edited By Nigel Gilbert Abstract The market effects of quality variability and uncertainty have classically been studied in the particular context of asymmetric information, focusing on the sellers' expected behavior and the phenomenon of adverse selection. 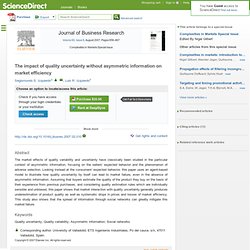 Looking instead at the consumers' expected behavior, this paper uses an agent-based model to illustrate how quality uncertainty by itself can lead to market failure, even in the absence of asymmetric information. A mechanism for social selection and successful altruism. Within the framework of neo-Darwinism, with its focus on fitness, it has been hard to account for altruism behavior that reduces the fitness of the altruist but increases average fitness in society. 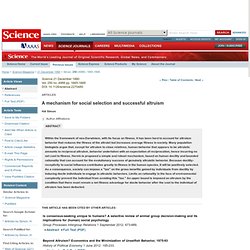 Many population biologists argue that, except for altruism to close relatives, human behavior that appears to be altruistic amounts to reciprocal altruism, behavior undertaken with an expectation of reciprocation, hence incurring no net cost to fitness. Herein is proposed a simple and robust mechanism, based on human docility and bounded rationality that can account for the evolutionary success of genuinely altruistic behavior.

Because docility-receptivity to social influence-contributes greatly to fitness in the human species, it will be positively selected. As a consequence, society can impose a "tax" on the gross benefits gained by individuals from docility by inducing docile individuals to engage in altruistic behaviors. Journal of Accounting and Economics - Conference calls and information asymmetry. Abstract. 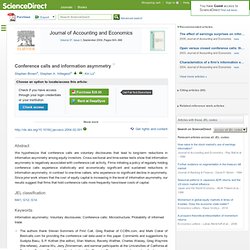 PsycNET - Display Record. List of biases in judgment and decision making. Cognitive biases are tendencies to think in certain ways that can lead to systematic deviations from a standard of rationality or good judgment, and are often studied in psychology and behavioral economics. 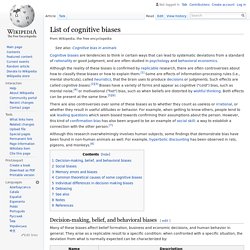 There are also controversies over some of these biases as to whether they count as useless or irrational, or whether they result in useful attitudes or behavior. For example, when getting to know others, people tend to ask leading questions which seem biased towards confirming their assumptions about the person. PsycNET - Display Record. Bounded rationality. Bounded rationality is the idea that in decision-making, rationality of individuals is limited by the information they have, the cognitive limitations of their minds, and the finite amount of time they have to make a decision. It was proposed by Herbert A. Simon as an alternative basis for the mathematical modeling of decision making, as used in economics, political science and related disciplines; it complements rationality as optimization, which views decision-making as a fully rational process of finding an optimal choice given the information available.[1] Another way to look at bounded rationality is that, because decision-makers lack the ability and resources to arrive at the optimal solution, they instead apply their rationality only after having greatly simplified the choices available.

Some models of human behavior in the social sciences assume that humans can be reasonably approximated or described as "rational" entities (see for example rational choice theory). Origins[edit] In-group favoritism. In-group favoritism, sometimes known as in-group–out-group bias, in-group bias, or intergroup bias, refers to a pattern of favoring members of one’s in-group over out-group members. This can be expressed in evaluation of others, allocation of resources, and many other ways.[1] For example, it has been shown that people will seek to make more internal (dispositional) attributions for events that reflect positively on groups they belong to and more external (situational) attributions for events that reflect negatively on their groups.[2] This interaction has been researched by many psychologists and linked to many theories related to group conflict and prejudice.

The out-group homogeneity effect has been found using a wide variety of different social groups, from political and racial groups to age and gender groups.[4] The implications of this effect on stereotyping have been noted.[5] Perceivers tend to have impressions about the diversity or variability of group members around those central tendencies or typical attributes of those group members. Thus, outgroup stereotypicality judgments are overestimated, supporting the view that out-group stereotypes are overgeneralizations.[6] Empirical support[edit] Racial investigation[edit] Explanations[edit]

Self-serving bias. Methods[edit] Laboratory testing[edit] Investigations of the self-serving bias in the laboratory differ depending on the experimental goals, but have basic fundamental aspects. Participants perform some task, often of intelligence, social sensitivity, teaching ability, or therapy skills.[9] Participants may be asked to work alone, in pairs, or in groups. After task completion, participants are given randomized bogus feedback. Some studies employ emotion-induction mechanisms to investigate moderating effects on the self-serving bias.[12] Finally, participants make attributions for the given outcomes.

Neural experimentation[edit] Cognitive bias. A cognitive bias is a pattern of deviation in judgment, whereby inferences about other people and situations may be drawn in an illogical fashion.[1] Individuals create their own “subjective social reality” from their perception of the input.[2] An individual’s construction of social reality, not the objective input, may dictate their behaviour in the social world.[3] Thus, cognitive biases may sometimes lead to perceptual distortion, inaccurate judgment, illogical interpretation, or what is broadly called irrationality.[4][5][6] Some cognitive biases are presumably adaptive. A continually evolving list of cognitive biases has been identified over the last six decades of research on human judgment and decision-making in cognitive science, social psychology, and behavioral economics.

Critical thinking is a type of clear, reasoned thinking. According to Beyer (1995) Critical thinking means making clear, reasoned judgements. Framing (social sciences) Cognitive traps for intelligence analysis. Belief bias. Belief bias is the tendency to judge the strength of arguments based on the plausibility of their conclusion rather than how strongly they support that conclusion.[1] Predictably Irrational. Predictably Irrational: The Hidden Forces That Shape Our Decisions is a 2008 book by Dan Ariely, in which he challenges readers' assumptions about making decisions based on rational thought.