GP Essays. Throughout human history, we have been through eras of revolution by improved technology. 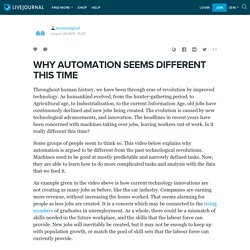 As humankind evolved, from the hunter-gathering period, to Agricultural age, to Industrialisation, to the current Information Age, old jobs have continuously declined and new jobs being created. The evolution is caused by new technological advancements, and innovation. The headlines in recent years have been concerned with machines taking over jobs, leaving workers out of work. Is it really different this time? Some groups of people seem to think so.

An example given in the video above is how current technology innovations are not creating as many jobs as before, like the car industry. GP Notes. Singapore as a small city-state has been known as the Garden City, or ‘City in a Garden’, thanks to the foresight of the late Lee Kuan Yew who believed that plants and biodiversity would increase people’s overall well-being and transform physical spaces. 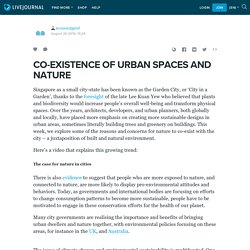 Over the years, architects, developers, and urban planners, both globally and locally, have placed more emphasis on creating more sustainable designs in urban areas, sometimes literally building trees and greenery on buildings. This week, we explore some of the reasons and concerns for nature to co-exist with the city – a juxtaposition of built and natural environment. Here’s a video that explains this growing trend: The case for nature in cities. GP Question. How are you feeling today? 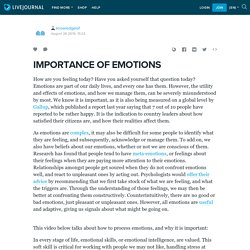 Have you asked yourself that question today? Emotions are part of our daily lives, and every one has them. However, the utility and effects of emotions, and how we manage them, can be severely misunderstood by most. We know it is important, as it is also being measured on a global level by Gallup, which published a report last year saying that 7 out of 10 people have reported to be rather happy. GP Notes. Discrimination happens in every society at every level. 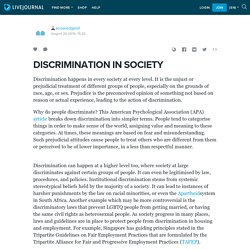 It is the unjust or prejudicial treatment of different groups of people, especially on the grounds of race, age, or sex. Prejudice is the preconceived opinion of something not based on reason or actual experience, leading to the action of discrimination. Why do people discriminate? This American Psychological Association (APA) article breaks down discrimination into simpler terms. People tend to categorise things in order to make sense of the world, assigning value and meaning to these categories. Discrimination can happen at a higher level too, where society at large discriminates against certain groups of people. On another level, discrimination can happen at the day-to-day level where people experience micro-aggression. GP Question.

Fatherlessness, or the absence of fathers from families, has been linked with multiple social ills such as the increased incidence of child and substance abuse, higher risk of criminality and incarceration for children and even linked to that situation that children are more likely to suffer from obesity. 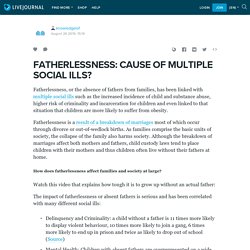 Fatherlessness is a result of a breakdown of marriages most of which occur through divorce or out-of-wedlock births. As families comprise the basic units of society, the collapse of the family also harms society. Although the breakdown of marriages affect both mothers and fathers, child custody laws tend to place children with their mothers and thus children often live without their fathers at home. How does fatherlessness affect families and society at large? Watch this video that explains how tough it is to grow up without an actual father: GP Topics.

GP Essays. The Fairtrade symbol has a blue and yellow yin-yang, with two halves separated by a black humanoid swoosh. 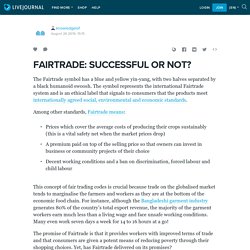 The symbol represents the international Fairtrade system and is an ethical label that signals to consumers that the products meet internationally agreed social, environmental and economic standards. Among other standards, Fairtrade means: Prices which cover the average costs of producing their crops sustainably (this is a vital safety net when the market prices drop) A premium paid on top of the selling price so that owners can invest in business or community projects of their choice Decent working conditions and a ban on discrimination, forced labour and child labour This concept of fair trading codes is crucial because trade on the globalised market tends to marginalise the farmers and workers as they are at the bottom of the economic food chain.

Watch this video which argues that Fairtrade does not actually help poor workers. Other In-House Certification Programs Greenwashing. GP Notes. Planned obsolescence is a business strategy in which the obsolescence of a product is planned and built into it from its conception. 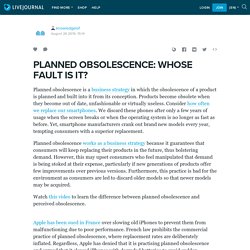 Products become obsolete when they become out of date, unfashionable or virtually useless. Consider how often we replace our smartphones. We discard these phones after only a few years of usage when the screen breaks or when the operating system is no longer as fast as before. Yet, smartphone manufacturers crank out brand new models every year, tempting consumers with a superior replacement. Planned obsolescence works as a business strategy because it guarantees that consumers will keep replacing their products in the future, thus bolstering demand. Watch this video to learn the difference between planned obsolescence and perceived obsolescence. Apple has been sued in France over slowing old iPhones to prevent them from malfunctioning due to poor performance. Is There Any Good to Planned Obsolescence? Are the Consumers to Blame? GP Question. Procrastination is the habit of putting off important, often less pleasurable tasks by doing something that is easier or more enjoyable. 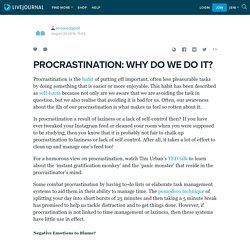 This habit has been described as self-harm because not only are we aware that we are avoiding the task in question, but we also realise that avoiding it is bad for us. Often, our awareness about the ills of our procrastination is what makes us feel so rotten about it. Is procrastination a result of laziness or a lack of self-control then? If you have ever tweaked your Instagram feed or cleaned your room when you were supposed to be studying, then you know that it is probably not fair to chalk up procrastination to laziness or lack of self-control. After all, it takes a lot of effort to clean up and manage one’s feed too! For a humorous view on procrastination, watch Tim Urban’s TED talk to learn about the ‘instant gratification monkey’ and the ‘panic monster’ that reside in the procrastinator’s mind. GP Topics. In the criminal justice system of Singapore, once an offender has pleaded guilty or the courts have found an accused person to be guilty of an offence beyond reasonable doubt, to ensure that the defendant receives a fair sentence, the courts take into account arguments that are advanced by both the prosecution and the defence, based on these four main principles that guide the sentencing process: 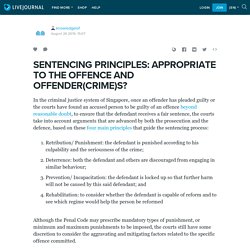