The Indian Sun is one of the best leading Indian magazine in Australia for Indian people groups.It covers stories related to news, events, Bollywood news and celebrity interviews.

Bollywood News - Bollywood in Melbourne | Bollywood in Sydney. The Indian Sun Au. Are Smart Media Tokens (SMTs) the Future of Content Creation? A major touchstone within the media space has been the exploration of new business models. 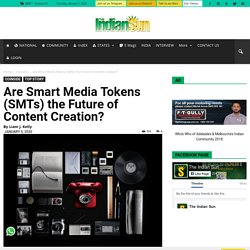 At current, the ad-based mechanism for making money has fallen short in many respects. It can incentivise sensationalised content to generate clicks, for instance. From a marketing perspective, current models also promote the buying of “likes” or “upvotes” rather than authentic market interest. Crypto does offer some alternatives to this. At UFOstart, we have written broadly about a number of these alternatives too. More importantly, it aligns with our vision of a more equitable media landscape, from marketing to journalism and everything in between. Adopting Crypto for Publishers and Content Creators Several major news organisations have reported layoffs across the board.

This means that traditional news services are low on funds, and readers are turning to alternatives to learn about the world. It also makes it difficult for users to separate the wheat from the chaff. They write: Understanding the true meaning of Diwali. What is the spiritual significance behind Diwali? 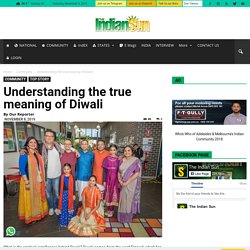 Diwali comes from the word Dipavali which has two words—Dipa meaning Light and Avali means Rows of Light/Carrier of Light. Therefore Dipa signifies ‘coming to light’. In Vedic culture, a lamp is lit to drive away inauspiciousness. It also means to come into knowledge from darkness. In Bhagavad-gita Chapter 10 Verse 11, Lord Krishna says—‘To show them (the devotees) special mercy, I with the shining lamp of knowledge, destroy the darkness born of ignorance.’ Diwali is celebrated for five days, each holding special importance through scriptural history. Day One is Dhanteras, dedicated to the worship of Lord Dhanvantari for good health. 2. 3. 4. Day Five is the festival of Bhai-duuj or a special festival commemorating the bond between brothers and sisters. Therefore, if you haven’t already been a part of our festivals and events, it’s never too late. Yatra goes "back in time" to raise funds. 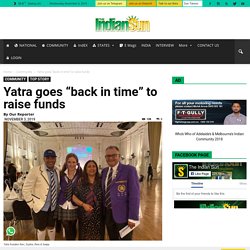 Back to school was the new theme in addition to the standard “Bollywood”, and the 270 people who attended embraced this theme with great imagination. With the guests in school uniforms, the hall was adorned with blackboards, pens and pencils, and other school paraphernalia, highlighting Yatra’s mission: to provide access to a quality education for the poorest children in India. The night was a great success with wonderful silent and live auction offerings, the very popular mehndi stall, great food from Gaylords, DJ Aji mixing it up, and the Ignite dancers giving everyone a taste of Bollywood dancing. Auctioneer Mark Verocchi was brilliant as ever ensuring great prices for all the live auction items. The evening was fabulously MC’d by long-time Yatra friend and supported Sadhana Smiles, who kept the crowd interested and entertained as always. RuPay ends Visa and Mastercard duopoly in India, says GlobalData. Indian domestic card scheme RuPay registered exponential growth both in terms of cards in circulation and transaction value between 2015 and 2019, and in the process has ended the dominance of American payment giants Mastercard and Visa, according to GlobalData, a leading data and analytics company. 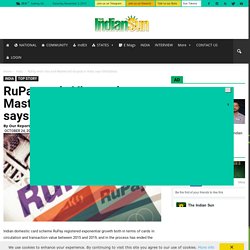 An analysis of GlobalData reveals that the number of RuPay debit cards more than doubled from 263 million in 2015 to 605.3 million in 2019. Woman-run Melbourne Company Dominates Australian Independent Film Industry. Her Company, Mind Blowing Films wins the Highest Grossing Foreign Film Award at AIMC for the 4th time for the movie ‘Sanju’ Mitu Bhowmick Lange and Mind Blowing Films has won the Highest Grossing Foreign Film Award for ‘Sanju’ at the Australian International Movie Convention (AIMC) this year. 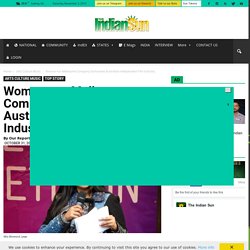 This is the fourth time that this team has got this award, the previous ones were for the films Dhoom 3, PK and Dangal. Qube Cinemas is associated with her. The blockbuster titles that are currently running to packed theaters are Housefull 4 and Saand ki Aankh. Saffron Day: Remembering Deyaan. It is a heart-breaking moment for any parent to witness their seven-year-old son die in their presence. 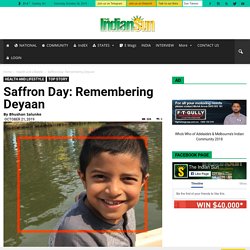 This tragedy occurred to the Udani family, living in Australia, when they were on a holiday trip to India in 2016. Deyaan, their 7-year old bubbly son, succumbed to unexpected brain haemorrhage and passed away. Just a couple of months before, Deyaan had learnt about organ donation in his school. He had come home excited and expressed his intention to becoming an organ donor. It was as if there had been a divine intervention in the matter. Australia resettles people most in need as part of the 2018-19 Humanitarian Program. Australia continues to resettle people most in need, with more than 18,750 refugee and humanitarian visas granted in 2018-19. 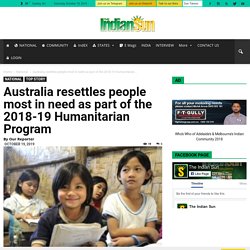 Minister for Immigration, Citizenship, Migrant Services and Multicultural Affairs David Coleman said a total 18,762 places were delivered in the 2018-19 program year. 17,112 visas were granted under the offshore component of the Humanitarian Program, with a continued focus on resettling vulnerable people from protracted and emerging refugee situations. The onshore component of the Humanitarian Program delivered 1,650 grants. “Australia has a long history of assisting refugees and is one of the world’s top contributors to refugee resettlement efforts.

Why build a new home? From choosing your own design to energy and cost savings, the reasons are plenty You’re finally ready to invest your hard-earned dollars into something a little more permanent… good for you! 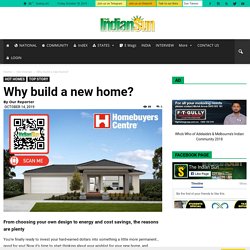 Now it’s time to start thinking about your wishlist for your new home, and comparing your options on one of the biggest investments you will probably make in your life. Coalition of Peaks to hold consultation meetings on Closing the Gap in Victoria this week. Bendigo will host three face-to-face consultation meetings in Victoria this week on the development of a new National Agreement on Closing the Gap. 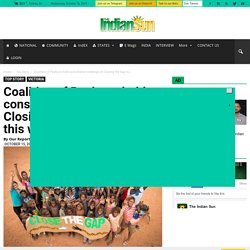 The meetings provide an opportunity for Aboriginal and Torres Strait Islander people to tell the Coalition of Aboriginal and Torres Strait Islander Peaks (Coalition of Peaks) and governments what changes are needed to improve their lives. Aboriginal Executive Council Chair, Esme Bamblett said it was important that both metropolitan and regional communities are engaged in the development of a new agreement on Closing the Gap.

“The Coalition of Peaks will be leading consultations on Closing the Gap in every state and territory during October, including three meetings here in Victoria,” Bamblett said. Victorian meetings were kicked off in Bendigo but will also be held in Melbourne and Morwell during the week. Why do some children have difficulty falling asleep? Sleeping difficulties in children and what to do about them Sleeping difficulties in children are common. 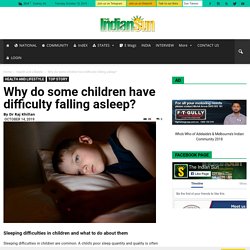 A child’s poor sleep quantity and quality is often caused by a number of factors, including developmental, social, behavioural, cognitive, academic, and health difficulties. In some cases, sleep problems can also negatively impact a family. A season of lights and literary fests. The Indian diaspora in Australia has been making waves in several fields. Rashesh Bhavsar, CEO & co-founder of Fortune Wealth Creation Group, is one of them. For a few years now, he has been working to make a difference in people’s lives. And a mark he has made. A Member of Million Dollar Round Table (MDRT), a nomination for the Rising Star of the Year award, and one of the first Indian financial advisers to be on panel speakers at the Trade and Investment Expo, you can read all about Rashesh and the work he does as The Indian Sun has done an extensive interview with him.

Bringing people together… in an instant. Ismail Ahmed, founder of WorldRemit, speaks of how tough years as a student struggling to support his refugee family financially, inspired him to start his company The money transfer business is personal for Ismail Ahmed, founder of WorldRemit. It was cash wired by his family that allowed him to make the final leg of his journey from escaping fighting in his native Somaliland to London in 1988, to take up a university scholarship.

Today, WorldRemit is one of a handful of fintech firms that is upending the remittances business that has long been dominated by three US firms—Western Union, MoneyGram and Ria—as well as banks. Piggybacking on the development of mobile money systems in Africa, Asia and other developing countries, these fintech firms offer migrant labourers a more convenient way to send money home at a lower cost. First ever Junior Cricket World Cup held in Adelaide. Taking part in sports is essential for children as it reduces stress and enhances their mood, builds healthy bones and muscles, increases fitness, improves sleep, helps them socialise, develops cooperation skills, boosts self-confidence, fosters sportsmanship, disciplines the child, gets the child outdoors, and is critical for personality development. With these objectives in mind, the Multicultural Communities of Australia (MCA), in association with South Australia Cricket Association (SACA) and Fitzroy Community Club (FCC) organised the Junior Cricket World Cup 2019, on Sunday, 22 September at the Fitzroy Community Club, Renown Park (Adelaide), South Australia.

The day commenced with an Opening Ceremony, in which all participating teams Afghanistan, Bangladesh, India, Nepal, Pakistan, and Sri Lanka were present, holding their National Flags. This Junior World Cup couldn’t be written as a “Success Story” without listing the contributions from individuals and their hard work. Hindi learning a success in Darcy Road School; Tamil up next. Hindi is not only a language for children of Indian origin but it helps them have an identity, says Kulwinder Kaur, a teacher of Hindi at Darcy Road Public School, in Wentworthville, where Hindi is being taught.

“Culture and language are not separate from each other,” she says. The SBS Hindi team recently visited Darcy Road Public School to find out more about their Hindi classes and importance of learning languages. Talking about the process of taking children in Hindi class, Kulwinder says children of Indian origin are given the option to learn Hindi while entering school. HOTA Forum Victoria celebrates Raksha Bandhan. The Victorian Hindu community celebrated Raksha Bandhan event on Saturday, 14 September 2019 at the HSV Cultural Centre in Carrum Downs, Melbourne.

This annual gathering of community leaders is an important social and cultural event in the Victorian Hindu community calendar. This was the fourth edition of the celebrations by the Hindu Organisations Temples and Associations (HOTA) Forum. This year, the event was hosted by Divya Jyoti Jagrati Sansthan (DJJS) Melbourne, along with HOTA Forum custodians—Vishva Hindu Parishad of Australia Inc (VHPAU)—Victorian Chapter.

The Executive Club News: Indian Business Directory Australia. Univ of Melbourne launches five-year India strategy. EID of Respect And Love. Facebook's cryptocurrency Libra may not launch in India. Conquering the Big C. I, Nooyi. The dawn of Modi 2.0. Snake removal a phone call away. Udaipur Prince collects 300 K plus clothing items, breaks world record. Write In Private: Free Online Diary And Personal Journal. A trip to Pakistan. The Gender Pay Gap and How to Fix it. Renewables can lift world’s poorest out of poverty. Will the fire ever burn out for P3T Daily ROI game? Sun Tokens: Stay informed, stay rewarded. The Growth Faculty presents An Evening with Indra Nooyi. Movie limelights love in the time of social media. India and its new obsession to win away from home. Focus on the positive. Indian Summer Festival set to entertain Melbourne. Pink Sari Inc to attend Domain Sydney Pink Test.