Creational patterns. Decoupling Patterns. Design Patterns: The Composite Pattern. Coffee Coffee If you're anything like me, you'll agree that every morning needs to start out with a cup of coffee. 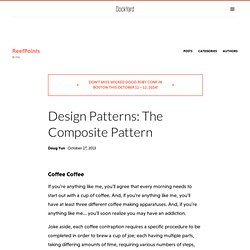 And, if you're anything like me, you'll have at least three different coffee making apparatuses. And, if you're anything like me... you'll soon realize you may have an addiction. Joke aside, each coffee contraption requires a specific procedure to be completed in order to brew a cup of joe; each having multiple parts, taking differing amounts of time, requiring various numbers of steps, etc. Memento Pattern. The memento design pattern is a pattern that helps to save the object internal in an external place enabling us to restore the state later when needed. 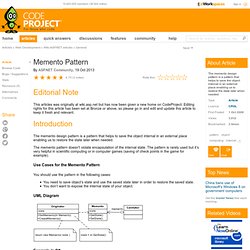 The memento pattern doesn't violate encapsulation of the internal state. The pattern is rarely used but it’s very helpful in scientific computing or in computer games (saving of check points in the game for example). Use Cases for the Memento Pattern. Memento Pattern. Visitor Pattern. The visitor design pattern enables us to create new operations to be performed on an existing structure. 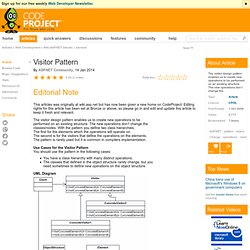 The new operations don’t change the classes/nodes. With the pattern you define two class hierarchies. The Visitor Design Pattern. I guess many people know about the Visitor design pattern, described in the Gang of Four’s Design Patterns: Elements of Reusable Object-Oriented Software book. 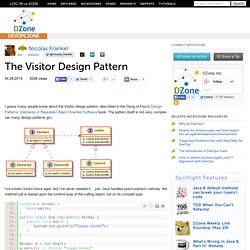 The pattern itself is not very complex (as many design patterns go): I’ve known Visitor since ages, but I’ve never needed it… yet. Java handles polymorphism natively: the method call is based upon the runtime type of the calling object, not on its compile type. 01.interface Animal { 02. void eat(); 04.public class Dog implements Animal { 05. public void eat() { 06. 10.Animal a = new Dog(); The Adaptive Interface Pattern. Many times you read about some design pattern in a book or online, and you realise that it’s a technique you’ve been using for years – you just didn’t have a name for it. 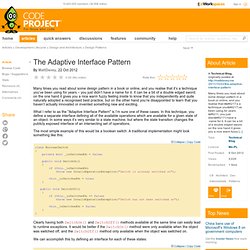 It can be a bit of a double edged sword; on the one hand it gives you a nice warm fuzzy feeling inside to know that you independently and quite naturally adopted a recognised best practice, but on the other hand you’re disappointed to learn that you haven’t actually innovated or invented something new and exciting. What I refer to as the "Adaptive Interface Pattern" is I’m sure one of these cases. In this technique, you define a separate interface defining all of the available operations which are available for a given state of an object. In some ways it’s very similar to a state machine, but where the state transition changes the publicly exposed interface of an intersecting set of operations. Design patterns in the test of time: Proxy. A proxy, in its most general form, is a class functioning as an interface to something else. 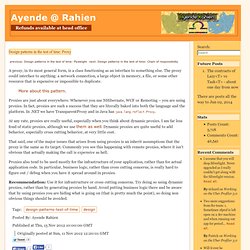 The proxy could interface to anything: a network connection, a large object in memory, a file, or some other resource that is expensive or impossible to duplicate. More about this pattern. Proxies are just about everywhere. Whenever you use NHibernate, WCF or Remoting – you are using proxies. In fact, proxies are such a success that they are literally baked into both the language and the platform. At any rate, proxies are really useful, especially when you think about dynamic proxies. That said, one of the major issues that arises from using proxies is an inherit assumptions that the proxy is the same as its target. Proxies also tend to be used mostly for the infrastructure of your application, rather than for actual application code. Essential Design Patterns For Mobile Banking. Despite a great deal of mobile innovation, many creators of financial apps still copy their interface patterns from the desktop Web, even though these patterns are not as well suited to the mobile space.

Small screens, custom controls, divided attention and fat fingers demand different thinking when designing for mobile. I previously covered mobile wallet UX considerations in my article “Ultimate Guide to Designing NFC Mobile Apps You Won’t be Ashamed Of.” In this article, we will look specifically at simple mobile transfers of funds from checking to savings accounts, taking what works on the Web and converting it into authentically mobile flows using simple, effective design patterns. Similar analyses and design strategies can be applied to many other areas that involve complex forms, such as mobile e-commerce checkout and social network registration. We will not name any companies in this article. Let’s begin with the basic building block: selecting an account. Picker/Spinner References. Learn design patterns from real projects: RigsOfRods case study. The majority of developers have already heard about design patterns, GOF(Gang Of Four) patterns are the most popularized, and each developer has his way to learn them , we can enumerate: Reading a book or a magazine.From web sites.From a collegue.Doing a training. 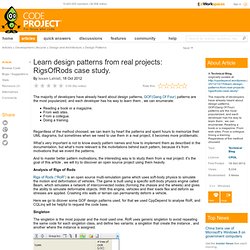 Regardless of the method choosed, we can learn by heart the patterns and spent hours to memorize their UML diagrams, but sometimes when we need to use them in a real project, it becomes more problematic. What’s very important is not to know exacly pattern names and how to implement them as described in the documentation, but what’s more relevant is the motivitations behind each pattern, because it’s from motivations that we invent the patterns. And to master better pattern motivations, the interesting way is to study them from a real project. it’s the goal of this article , we will try to discover an open source project using them heavily. Analysis of Rigs of Rods Singleton The singleton is the most popular and the most used one. iOS SDK: Creating an Awesome Carousel. Engage your users with stunning carousels. 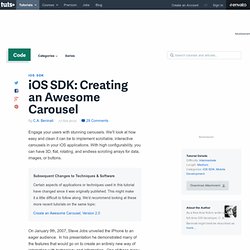 We'll look at how easy and clean it can be to implement scrollable, interactive carousels in your iOS applications. With high configurability, you can have 3D, flat, rotating, and endless scrolling arrays for data, images, or buttons. Subsequent Changes to Techniques & Software. Using the Proxy Pattern to Inject the uninjectable. Download source code - 485.1 KB Introduction When I first discovered Dependency Injection, it changed the way I wrote code. 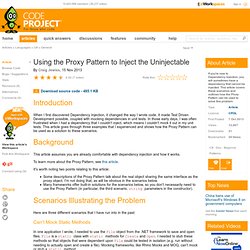 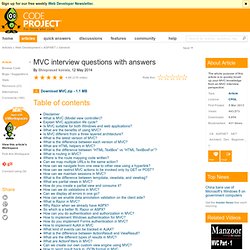 You need to keep designing, programming both small scale and large scale systems and keep learning from mistakes.Learning about Object oriented design principles is a good starting point. Anyway this article is about some design questions which has been repeatedly asked in various interviews. iOS Design Patterns.

You To Add A View With The Parallax Scrolling