Thousands of worshippers and tourists flock to West Africa for a Voodoo pilgrimage. 10 Ancient Religions That Are Still Followed Today. Religion The old beliefs have changed. 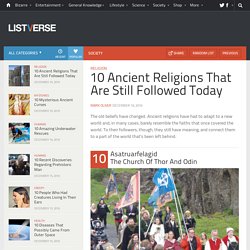 Ancient religions have had to adapt to a new world and, in many cases, barely resemble the faiths that once covered the world. To their followers, though, they still have meaning, and connect them to a part of the world that’s been left behind. 10 Facts About The Connecticut Witch Trials. History While nowhere near as famous as the Salem witchcraft trials that took place in 1692, the great Connecticut witchcraft panic, which lasted intermittently from 1647 until 1697, set a precedent in American history. 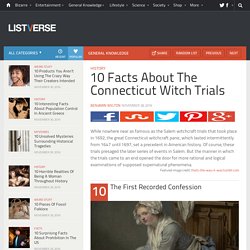 Of course, these trials presaged the later series of events in Salem. But the manner in which the trials came to an end opened the door for more rational and logical examinations of supposed supernatural phenomena. 10 The First Recorded Confession. Nigerians Mock Bishop's Daughter for Performing 'Fake' Miracle. Widowed women in India celebrate Holi. Does meditation keep emotional brain in check? Meditation can help tame your emotions even if you're not a mindful person, suggests a new study from Michigan State University. 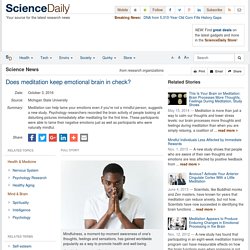 Reporting in the journal Frontiers in Human Neuroscience, psychology researchers recorded the brain activity of people looking at disturbing pictures immediately after meditating for the first time. These participants were able to tame their negative emotions just as well as participants who were naturally mindful. "Our findings not only demonstrate that meditation improves emotional health, but that people can acquire these benefits regardless of their 'natural' ability to be mindful," said Yanli Lin, an MSU graduate student and lead investigator of the study. The Huffington Post.