10 Bizarre Objects Made From Human Skulls. Creepy They once housed our brains and were closely associated with our sensory organs. 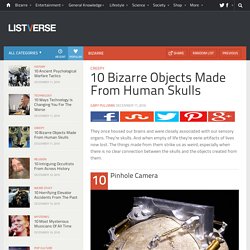 They’re skulls. And when empty of life they’re eerie artifacts of lives now lost. The things made from them strike us as weird, especially when there is no clear connection between the skulls and the objects created from them. 10Pinhole Camera Wayne Martin Belger’s Third-Eye Camera is made of the 150-year-old skull of a 13-year-old murdered Texas girl. The camera complete, Belger used it to photograph several landscapes, some of which look as bizarre as his camera. 9Candy An online confectioner offers “life-size skulls” made entirely of “Belgian chocolate.” The candy skulls, which remain edible for six months, are also available in “dark, milk, chili and caramel chocolates.” 8Cups Ancient Britons drank beverages from 14,700-year-old human skulls. Bourbon Street mass shooting 'possibly over woman': warrant.

The beef between the two accused gunmen in the Nov. 27 mass shooting on Bourbon Street that killed a man and wounded nine others was "possibly over a woman," according to the arrest warrant for one of the suspects. 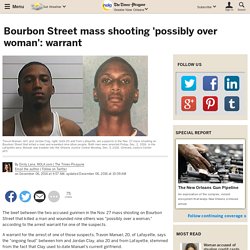 A warrant for the arrest of one of those suspects, Travon Manuel, 20, of Lafayette, says the "ongoing feud" between him and Jordan Clay, also 20 and from Lafayette, stemmed from the fact that Clay used to date Manuel's current girlfriend. Early on after the shooting, New Orleans Police Superintendent Michael Harrison said the gun battle that resulted in the death of Demontris Toliver and wounding of nine others -- none who was an intended target -- was precipitated by a prior dispute between the two. 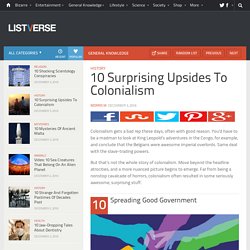 You’d have to be a madman to look at King Leopold’s adventures in the Congo, for example, and conclude that the Belgians were awesome imperial overlords. Same deal with the slave-trading powers. But that’s not the whole story of colonialism. Move beyond the headline atrocities, and a more nuanced picture begins to emerge. 10 Spreading Good Government Most of us kind of take democracy and functioning government for granted. So why does most of the world now at least pay lip service to democratic norms? When decolonization finally rolled around, many of those democratic institutions remained in place. 9 Creating Modern Medicine. 10 Ancient Languages With Unknown Origins. Mysteries Languages can provide us with a great deal of knowledge about a society’s culture, way of life, evolution, and even their migration patterns. 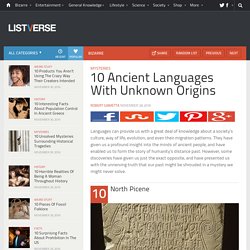 They have given us a profound insight into the minds of ancient people, and have enabled us to form the story of humanity’s distance past. However, some discoveries have given us just the exact opposite, and have presented us with the unnerving truth that our past might be shrouded in a mystery we might never solve. Black Friday is big in Brazil despite no Thanksgiving. From travel agencies to cosmetics makers to real estate agents, the Black Friday frenzy has taken over Brazil even as the fever cools in the United States. 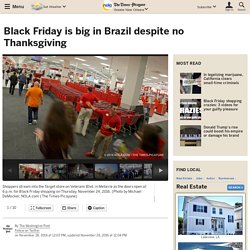 Retailers in the South American nation adopted the concept a few years ago of a day filled with attention-getting discounts to start off the holiday season. Brazilians have embraced it, though it falls on a regular weekday there -- the day after the Thanksgiving holiday in the U.S. Throughout the country, Brazilian retailers advertise their sales with the words "Black Friday" in English. (Some companies have offered discounts all week, referring to them as "Black Friday week" specials.) 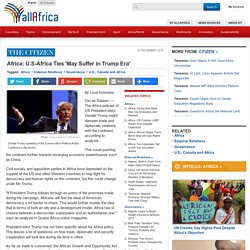 This could pushing the continent further towards emerging economic powerhouses such as China. Civil society and opposition parties in Africa have depended on the support of the US and other Western countries to help fight for democracy and human rights on the continent, but this could change under Mr Trump. "If President Trump follows through on some of the promises made during his campaign, Africans will find the ideal of American democracy a lot harder to share. This would further muddy the idea that in terms of both an ally and a development model, Africa has to choose between a democratic superpower and an authoritarian one," says an analysis in Quartz Africa online magazine.

President-elect Trump has not been specific about his Africa policy. So What's the Big Fuss About No-Till Agriculture? #COP22.